Built from 1866, for Benjamin Franklin Vandervort (1836-1882), and his wife Caroline Ringold Fahnestock (1845-1911). Standing at the corner of Penn and South Homewood Avenues, the Vandevorts named their East End home "Homewood". However, today the house takes its name and present form from its next owners - Henry Clay Frick and his wife Adelaide Howard Childs - in whose family it remained until 1984. Clayton is one of the very few houses to survive fully in tact from the period when the street was known as "Millionaire's Row". The Frick's daughter, Helen, maintained the house up until her death which occurred here in 1984. Since 1990, Clayton has been open to the public as the home of the Frick Art and Historical Center....
zoom_in 20 images 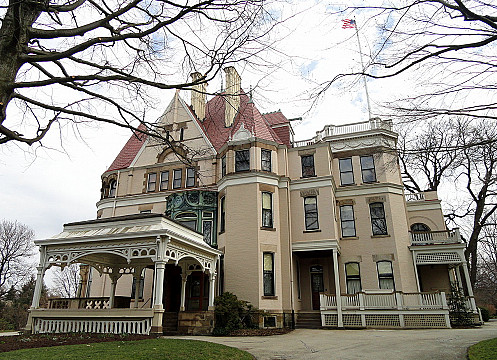 Philanthropist, Educator & Patron of the Arts, of Pittsburgh

Benjamin F. Vandervort was Pittsburgh born and bred and in 1867 he was appointed vice-President of the Fahnestock White Lead Company started there by his father-in-law. He and Caroline were married in 1864 at the Fahnestock farm which occupied the land at Penn and Homewood Avenues. Two years later, on an acre-and-a-half of that land, they built an 11-room, two-and-half-story house in the Italianate style which stands at the core of Clayton today. By the time Benjamin Vandevort died in 1882, he had become one of the original members of the Carnegie Steel Company and it was therefore not a coincidence when his widow sold their home that year for $25,000 to Henry Clay Frick, the industrialist who just one year before had become chief of operations at Carnegie Steel.

Before moving in, the Fricks carried out their first major overhaul of the house under the supervision of local architect Andrew W. Peebles. For the interior and furnishings, they obtained the services of D.S. Hess & Company of New York, and Clayton was among the very first mansions in Pittsburgh to have electricity and telephones, courtesy of the generator at Solitude, the home of Frick's friend, George Westinghouse. The last phase of these works involved the installation in 1883 of 18-stained glass windows made specifically for Clayton by Alfred S. Godwin in Philadelphia. Known for using semi-precious stones in his compositions, the themes of his designs were centered on landscapes and seasons. The Fricks moved in by January, 1883, and then named their new home "Clayton".

The second phase of works at Clayton was carried out between 1890 and 1892. It saw the grounds expanded to 5.5-acres and the house enlarged to 23-rooms over four stories and finished in the Chateauesque style by architect Frederick J. Osterling. The relationship between Osterling and Frick later soured when Frick employed him to build the Union Trust Building. Frick refused to pay up when the building was not completed on time. Osterling sued and the case bounced through the courts for a decade before finding in favor of Osterling. However, in the meantime, Frick had ensured Osterling would never work again. He didn't, but with over a million dollars in the bank, he didn't need to!

The smooth day-to-day running of the house was made possible by a permanent team of 11-servants, and in 1897 monthly wages for the staff totalled just under $400. The servants included a housekeeper, a cook, four maids, Mrs Frick's lady's maid (Pauline Turon), two stable hands and two groundskeepers. They were all kept in order by the head housekeeper, Mary Coyne, who worked for the Fricks for 40-years after emigrating to Pittsburgh from County Galway in Ireland. Mary's service did not go unnoticed and when she was dying, Helen Frick cabled her cousin: "Mary Coyne very ill. Please have everything possible done for her comfort". Other important members of staff included Helen's Swiss governess, Madame Marika Ogiz; the English butler, Joseph Holyrod; the head gardener, David Fraser; and, Spencer Ford, their African-American chef.

Moving up from Clayton

Alden & Harlow added three further bathrooms and two outbuildings in 1897, notably the children's playhouse with the bowling alley inside that still stands next to the greenhouse. From 1901, following Frick's famous fallout with Andrew Carnegie, he began to spend more time in New York and in 1903 he commissioned Cottier & Co. of New York to update some of the rooms at Clayton as well as installing an antique glass window called The Four Virgins. From 1905, Frick leased one half of the Vanderbilt Triple Palace on New York's Fifth Avenue and work had started on Eagle Rock, his 104-room summer house on Boston's North Shore. Although Clayton was no longer the family's permanent residence, they still visited and their daughter, Helen, remained particularly attached to the old house while their son, Childs, named his estate on Long Island, Clayton.

In 1908, Frick was excitedly planning an elaborate party to be thrown from 640 Fifth Avenue in New York to introduce his adored daughter, Helen, into society. He was equally excited about the exquisite and expensive jewelry he planned to give her to mark the occasion. Therefore, he was far from pleased when Helen - supported by her mother - informed him that she only wanted a simple affair and she wanted it back at Clayton with her real friends. As for her present, she politely refused his offer of jewelry and asked him instead to donate 150-acres to the city of Pittsburgh for a children’s park. This would mark the beginning of her adult life which she dedicated entirely to philanthropy.

As Helen grew up, she spent a lot of her time at her farm in Bedford, New York, near to her brother, Childs, who had given his home on Long Island the same name as that of their adored childhood home. Helen also maintained Eagle Rock as well as Clayton. She finally returned here permanently in 1981 at the age of 93, and died here three years later. Much of the artwork and furniture remained as it was almost one hundred years ago, preserved by the dust-sheets Helen had thrown over much of the ground floor. On her death, she left Clayton to the foundation that bears her family name, along with an endowment that would amply provide for its restoration as a house museum so that, “future generations may better understand the kind of life that was lived within its walls”.

Today, the house remains much as it was when it was enjoyed by the Frick family. Some of the quirkier features to keep an eye out for include the exterior doorknobs which are all engraved with an elegant "F" for "Frick," and the soot stains on the red silk lined walls in the Drawing Room - a reminder of the pollution from the factories so prevalent in late 19th century Pittsburgh. There is also the unusual sight of three twin-sized beds in a row in Helen's room: one was for Helen, another for her Swiss governess, and the third was for her two French dolls made by Jumeau of Paris, 'Shepard' and 'Shepherdess'!

After a four year, $6 million renovation, Clayton opened in 1990 as the Frick Art & Historical Center. It includes an art gallery, the Car & Carriage Museum, and greenhouse, which are all open to public. The Frick Center offers extensive tours of the mansion.

Pittsburgh Steps: The Story of the City's Public Stairways By Bob Regan

Pittsburgh Then and Now By Pittsburgh History & Landmarks Foundation