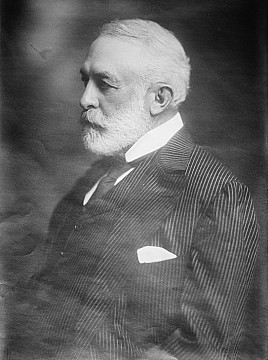 He was born at West Overton, 40-miles southeast of Pittsburgh, where his mother's family owned the Old Overholt whisky distillery. His father however was less prosperous and he had a limited education before entering into business with some cousins using a beehive oven to turn coal into coke for making steel. In 1880, with the financial support of his old friend Andrew Mellon, Frick was able to buy out his partners and now controlled 80% of the coal output in Pennsylvania. While on Honeymoon the following year, he met Andrew Carnegie which eventually led to their firms merging and Frick was appointed Chairman of the Carnegie Steel Company.

In 1889, the fishing and hunting club of which he was a charter member was responsible for lowering the dam that resulted in the Johnstown Flood which killed 2,209 people. In July, 1892, his dogged aversion to union workers led to the Homestead Strike which saw ten people killed and 2.5k workers lose their jobs. As a direct result an attempt was made on his life. His would-be assassin shot him twice in the neck and stabbed him five times in the leg - Frick was back at work within the week. At the same time, his relationship with Carnegie began to unravel as Carnegie undermined him in an effort to force him out.

After Carnegie abolished his position, the two went to court in 1900 and Frick was awarded $30 million in securities, making him the largest individual railway stockholder in the world. In 1901, he moved to New York City, serving on the board of J.P. Morgan's newly formed United States Steel Corporation. Whereas Morgan collected art as an investment, Frick was truly passionate about it. He started collecting seriously from about 1890 and his interest increased when he moved to New York and leased 640 Fifth Avenue. The house he later built there, the Frick House, was designed in the knowledge that it would one day become a museum and his collection (with an endowment) would be left to the public. Today, the Frick is home to the finest collection of European paintings in the United States. The Fricks summered at Eagle Rock in Massachusetts and kept Clayton in Pittsburgh which is today the Frick Art & Historical Center. Frick was survived by his wife, Adelaide, and two of their four children: Childs and Helen Frick. He left a fortune of $142 million of which $117 million was given to charitable causes.

The Johnstown Flood By David McCullough

Industrialists Patrons of the Arts Philanthropists