Completed in 1888, for John B. Henderson (1826-1913), the former U.S. Senator from Missouri, and his ambitious wife, Mary Foote Henderson (1842-1931), "The Empress of Sixteenth Street". Said to be modelled after a schloss (castle) that Mrs Henderson had come across in the Rhineland, it was constructed of Seneca sandstone and designed in the then fashionable Richardsonian Romanesque style by Massachusetts architect Eugene C. Gardner. Sitting on a steep hill just north of what is now Florida Avenue but was then beyond the city limits, the Henderson's called their rural domain "Prospect Castle" but it became better known over the years as Henderson Castle....
zoom_in 3 images 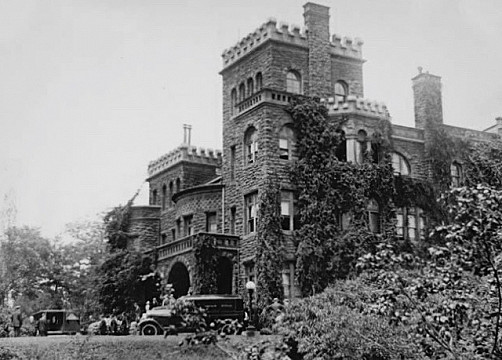 Between the price of the land and the build, the initial cost of their 30-room castle, centered by a 58-foot high tower, came to $100,000. But just four years later (1892) the Hendersons paid a further $20,000 to add a stable and service wing attached to the main house by an arched porte-cochere. Although constructed in the same style, this time they used local architect T. F. Schneider who was employed again in 1897 when the Hendersons paid another $18,000 to add a further two-story extension. The castle's battlements came into being after its final tweaks in 1902 by the architects Totten & Rodgers. It would prove a most fortuitous commission for Totten who then became Mrs Henderson's architect of choice as she famously set out to beautify the capital, starting with the Pink Palace.

Pictures of the castle's interior are sorely lacking but through contemporary descriptions in the 1890s we can get a rough idea: Being said to, "combine some of the best features of European architecture, the wide, "mellow" Moorish entrance hall was "a reproduction of the delicate type of the Alhambra". Off the hall to either side were a pair of "charming" drawing rooms and beyond that was an octagonal "plush-lined" art gallery that also doubled up as a ballroom. It contained, "some of the best specimens of modern French art and a superb wooden mantel carved by the students of the St Louis School of Design" which was both founded by Mrs Henderson, and where she studied too. Her reception room was, "adorned by several choicer paintings, the work of her own hands" and "the grand oak-panelled Dining Room was hung with "oak leaf embroidered tapestries".

The Patron of the Arts

At the turn of the century Mrs Henderson came across the works of Lucien Whiting Powell and declared: "this man is the American Turner, I must know him"! She became his patron and among other things built a studio for him at her castle. Over the course of the years she purchased more than 200 of his paintings and by the time she died there were no less than 70 of his paintings adorning the castle's walls.

Mrs Henderson was as generous a supporter of the arts as she was a fierce opponent of alcohol - much to her husband's despair. In 1906, she made headlines when she decided to do away with his 40-year old collection of fine wine. Her butler - a dour member of the Christian temperance society known as the Independent Order of Rechabites - asked her permission to assemble his group within the grounds. With a humorless determination, they emptied the contents of her long-suffering husband's cellar and while singing suitably somber hymns smashed every last one of his choice bottles against a rock on the front lawn! It went unreported as to her husband's whereabouts while all this unfolded, although it might be imagined that wherever he was, he was having a well-needed drink!

Thousands of dollars of Burgundy and Bordeaux's finest streamed into the gutters and down the hill on its way to the Potomac where, as contemporary reporters put it, "negroes gathered, and with tomato cans and other utensils scooped up what they could of the liquor and drank it. As they enjoyed themselves they sang old-time plantation melodies," that were in stark contrast to the temperance hymns being sung further up the hill!

Demise to Destruction
Mrs Henderson died in 1931, survived only by her grand-daughter, Beatrice, who made the mistake of declaring her to be mentally incompetent in her final year. By way of revenge, Mrs Henderson made a family secret very public, revealing that Beatrice was in fact not the natural daughter of her parents! Beatrice was also removed from her will in favor of her Japanese secretary, though after a court battle she and her cousins did end up with a goodly slice of their grandmother's pie after all.

The castle's furnishings were sold off at auction in 1935 before it was placed on the market for $500,000. It had been discounted from becoming an embassy as it was reported that there were only two bedrooms on the second floor, two on the third, and only one bath. This seems slightly incredulous but either way there were no takers. In 1937, it was leased to a pair of developers who converted it into 16 one or two bedroom apartments, billed as a "high class rooming house" and named the "Castle H Tennis and Swimming Club".

Sport became less of the attraction as the castle quickly evolved into "an after hour's club" which of course would have horrified Mrs Henderson! It also horrified the neighbors who were frequently kept up until all hours; and, so much so, that in 1941 one of them, Eugene Meyer, paid $150,000 for it for no other reason other than seeing it demolished, which was done in 1949. Days before the wrecking balls turned up, thousands of visitors scavenged what they could from the castle, taking anything from bamboo shoots to tiles, snippets of tapestries, and even the ivy that scaled its not-so-very ancient towers. Today, only the battlemented walls along Florida Avenue remain as a reminder of a bygone era.

Empire of Mud: The Secret History of Washington, DC By J.D. Dickey

Chocolate City: A History of Race and Democracy in the Nation's Capital By Chris Myers Asch & George Derek Musgrove