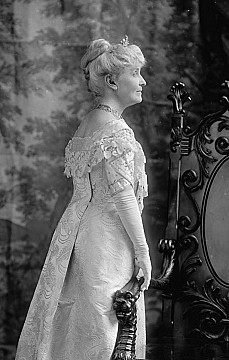 She was born in Saratoga Springs, New York, the daughter of a Judge and niece of Samuel Foote, the Governor of Connecticut. After attending a French Finishing School in New York City, she came to the capital curious, "to see how they give those Washington parties". There, she met the U.S. Senator from Missouri and they were married in 1868. Living first in St Louis, she was President of the Missouri State Suffrage Association and founded the St. Louis School of Design, working alongside the students, painting in oils and water colors as well as studying wood carving. On becoming a leading hostess in the city, in 1877 she published Practical Cooking & Dinner Giving.

Having made a fortune buying up what were supposed to be worthless war bonds, her husband retired from politics and in 1887 they returned to Washington D.C. where they threw themselves into society, building Henderson Castle. Becoming known as the "Empress of Sixteenth Street" and working alongside architect George Oakley Totten Jr., Mary set about developing Meridian Hill into what she hoped would become an equivalent of Paris' Avenue Foch, lined with beautiful mansions serving as embassies. They built twelve, the first of which was the legendary Pink Palace, aka Mrs Marshall Field House.

She lavished her patronage upon the artist Lucien Whiting Powell who she regarded as, "the American Turner". She saw Washington D.C. not as a commercial city, but as the capital of American culture and fought tirelessly for its beautification. She campaigned (unsuccessfully) to have Sixteenth Street lined with the busts of former Presidents and renamed "Avenue of the Presidents," as well as offering her castle to be used as the official residence of the U.S. Vice-President. Her campaigns ranged from uniformity of the color and height of Washington's buildings; banning double-decker buses; the dangers of alcohol and over-eating; and, launching a worldwide campaign against immodest bathing attire and women wearing short dresses and smoking! Nonetheless, a report by the Commission of Fine Arts concluded: "She labored during four decades, persuading and convincing Senators and Representatives; single-handed and alone she appeared before committees of Congress to urge approval for the work of development. She won."

At the age ninety, she could still be seen, rain or shine, taken by carriage twice daily to the Lincoln Memorial from where she would walk twice around the reflecting pool. She attributed her long life to healthy living and had always abhorred alcohol. In 1906 she made the headlines - even in New York - when she and her Temperance friends dashed her husband's 40-years old wine collection against a rock on the front lawn, to the delight of those gathered at the bottom of the hill (!), as told in the history of Henderson Castle.

In the last year of her life, she was was so angry with her grand-daughter, Beatrice, for declaring her to be mentally incompetent that she let it be known very publicly that Beatrice was in fact not the natural daughter of her son and his wife (who were both dead). She changed her will, and left most of her fortune to her Japanese secretary, Jesse Shima. But when she died the will was contested and Jesse's share was reduced so that part went to Mrs Wholean, and to a niece and nephew, Frances and Henry Arnold.