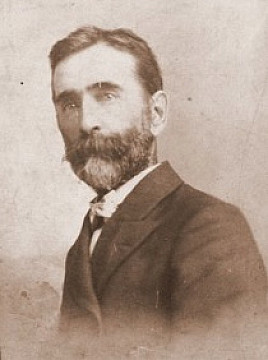 He was born at Levinworth Manor near Upperville, Virginia, a great-grandson of U.S. Congressman and the founder of Middleburg, Col. Leven Powell. He was interested in art from an early age and yet despite a leg injury that necessitated that he walk with a cane all his life, from 1863 to 1865 he joined his brothers to fight for Fitzhugh Lee's 11th Virginia Cavalry as a wagoneer and water boy. At the end of the war, his mother sent him to study with Thomas Moran (famous for his Turner-esque landscapes of the American West) at the Pennsylvania Academy of the Fine Arts. Moran encouraged him to travel to Europe and in 1876 he studied Turner at the National Gallery in London. He travelled for several years visiting Rome and Paris, and spending two years in Venice where he, "made a deep study of the light and shade effects in Venetian scenery". Venice remained one of his three chief subjects, the others being the Grand Canyon that he visited with the U.S. Geological Survey in 1901, and the Holy Land.

In 1880, he married "Nan" Fitzhugh (a scion of another old Virginian family) and they settled in Washington D.C. in 1885. At the turn of the century, his work was seen in a gallery by Mrs John B. Henderson (the ambitious wife of the former Senator from Missouri) who gave him her patronage. She helped get his name known and paid for his travels, notably to the Holy Land in 1910. She also built him a studio at Henderson Castle and bought over 200 of his paintings. His landscapes became widely collected and exhibited at local and national art exhibitions as well as being lauded in the regional press. His works feature in the private collections of Franklin D. Roosevelt, J. Edgar Hoover etc. By 1922, it was said that his paintings were, "in more homes (in the Washington area) than the work of any other one painter". He continued to work into old age, "retaining a vigor and clarity of mind that made him one of the wonders of Washington".