Built in 1840, for a certain Robert Clark who was probably related to Christopher Clark Hyatt (1799-1884), for whom the town over which the house stands was named. Clark built his home on top of a hill and it was variously known as "Ash Land" or "Ash Hill" and then more recently as "Hitching Post Hill". It's located just 10-miles outside Washington D.C. that back then was a far cry from the hustle and bustle of city life and it still retains that feeling today, protected by the same surrounding trees....
zoom_in 3 images 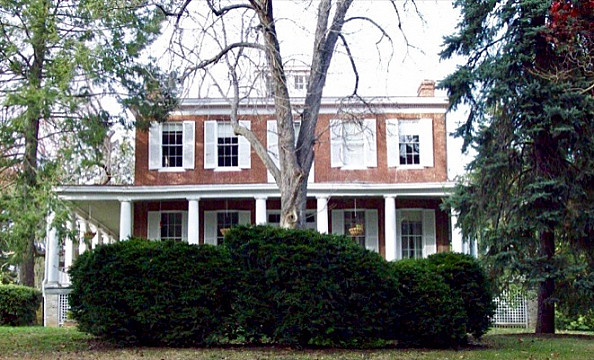 In 1836, Clark, an Englishman previously resident in Washington, bought 999-acres from George Calvert, said to have been a descendant of George Calvert, 1st Lord Baltimore, Colonial Proprietor of Maryland. Having built his home on 427.5 of those acres.

The sturdy Federal-style house has red brick walls 12-inches thick. Its stands two stories high, topped by a belvedere and with two chimneys at each gabled end. The facade has five bay windows with a fan lit central doorway. Inside, there are 11-fireplaces and original woodwork, flooring, and marble mantels throughout. In the grounds are found "The Springhouse" with its slate-tiled pyramid roof topped by a cupola, and the brick carriage house. Among the many original trees still standing is a 45-foot holly tree that is estimated to be 250-years old and a Black Willow, one of the largest in Maryland.

In 1875, Clark's heirs sold the property to the charismatic General Edward Fitzgerald Beale and his wife Mary Engle Edwards. From 1876, after Beale returned from Vienna, the Beales divided their time between here, their townhouse in Washington, Decatur House, and their ranch in Texas. The Beales were close friends with Ulysses S. Grant who in 1877 had just stepped down as U.S. President and taken a nostalgic trip back to his ancestral homeland, Scotland. However, Grant wrote to Beale: "I will feel more at home back in Washington than anywhere else, and no place more than in visiting your farm with you".

For Grant, Ash Hill was like a second home and he frequently rode out to the house after a day's work in Washington as much to see the Beales as to see his two Arabian horses that he kept stabled here - Leopard and Linden - gifts from the Sultan of Turkey. On one occasion, Grant was in such a hurry to reach Ash Hill that he was arrested for speeding on his horse! He gladly paid the fine incurred maintaining that he was not above the law. The original pictures of Grant's Arabian horses are today on display at Decatur House.

Other notable guests entertained by the Beales here included "Buffalo Bill" Cody and First Lady Frances Cleveland with her husband President Grover Cleveland. Legend also has it that Abraham Lincoln stayed here. In 1895, the Beales sold the home they named "Ash Hill" to Admiral Chauncey Thomas Jr. who referred to it as "Hitching Post Hill". He added the long porch supported by Doric columns that surrounds the house on three sides.

In 1947, the house was purchased by T. Raymond Burch and his wife, Nellie Finnell. They lovingly restored the property and placed it on the National Register of Historic Places in 1977. Mr Burch wrote a history of the house published in 1986: Historic Hitching Post Hill-Ash Hill: General Beale and its other owners. In 1983, the home was sold to John Giannetti who could not have been better suited to restoring the house's ornamental plasterwork being the same man who was employed to restore the crown moulding in the "Lincoln Bedroom" and the water-damaged hallway of the East Wing at the White House. He was President of the Prince George's County Historical Society and father of Maryland State Senator John Giannetti Jr. In 2015, it was put for sale at $799,900.

Restoring Your Historic House: The Comprehensive Guide for Homeowners By Scott T. Hanson