Completed in 1916, for John D. Rockefeller (1839-1937) and his wife Cettie Spelman (1839-1915). The 40-room Greek-Roman revival mansion enjoys an unparalleled view that sweeps sixty miles from the bluffs of West Point, over the Hudson Valley and across to the skyline of New York City. Described as "a hilltop paradise" the house was home to four generations of the Rockefeller family. Frommer's states that of all the great houses that line the Hudson River, "it's not the oldest, nor even the largest, but many people find it the most spectacular". Kykuit certainly stands out from the crowd through its overall combination of magnificent architecture, stunning gardens, spectacular views; and the wealth of art and history imbedded throughout the estate....
zoom_in 20 images 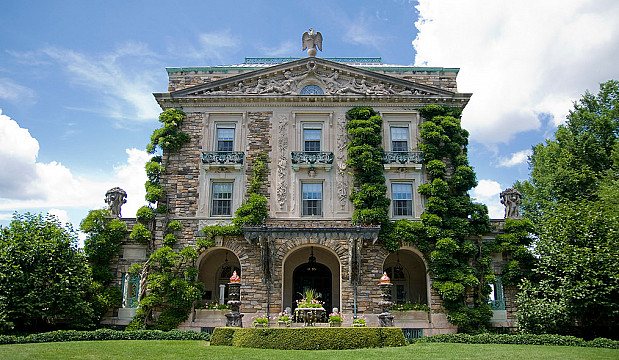 Vice-President of the United States & 49th Governor of New York

John D. Rockefeller was properly introduced to the area in 1886, when his brother, William Avery Rockefeller Jr. (1841-1922), purchased nearby Rockwood Hall. John D. was taken by the natural beauty of the Hudson Valley and from 1893 put his mind towards building himself a country seat. He quietly went about buying up land to bring his project to fruition; culminating in the purchase of 17 farms totalling 3,500-acres.

The first house erected at Pocantico Hills by John D. was destroyed by a fire in 1902 and this also coupled with him falling out with the original landscape designer, Frederick Law Olmsted. The task of managing the new project was taken on by John D.'s son, John D. Rockefeller Jr. (1874-1960), who was helped by his wife, Abby Aldrich (1874-1948), who was instrumental on its interior design. Rather than build a colossus, they aimed to create a comfortable yet fitting country residence for America's richest man and his wife.

In 1906, they hired the celebrated architectural duo William Adams Delano and Chester Holmes Aldrich to build the new house while the prominent beaux-arts architect William Welles Bosworth (1868-1966) was employed to landscape the gardens and build the terraces, pavilions, fountains, teahouse and Orangerie. It was Bosworth who was also asked to redesign the east facade after a third floor was added and to rebuild the stables.

The project started in 1907 and the new house was sited on the top of Kykuit Hill, a 500-foot knoll and the highest point in the hamlet of Pocantico Hills. The hill had been used by native Indians to send smoke-signals and recognised as an optimum vantage point, it was given the name Kykuit by the early Dutch settlers that translates to "Lookout".

The 6-story mansion of weathered fieldstone is approached by a long winding drive, the start of which is marked by large iron gates at the foot of the hill. The drive crosses the golf course, laid out in 1901: Rockefeller had used his influence to reroute the Putnam Railroad 5-miles away from the property so as not to risk his guests getting dusted in soot while playing!

Though the sculptures and artwork at Kykuit are predominantly European in taste, guidebooks often neglect to mention the Japanese Garden found on the hillside below the main house. Its streams, waterfalls and ponds - complete with a Shinto shrine - were inspired by a trip taken by John D. Jr. and his wife to Kyoto.

Dominating the forecourt of KyKuit is the Oceanus Fountain, a replica of Giambologna's 16th century original found at the Boboli Gardens in Florence. Several sculptures sited among the terraces and gardens are part of the original design, but it was John D.'s grandson, Nelson Aldrich Rockefeller (1908-1979), who on inheriting the house in 1960 introduced more than 70 works of modern sculpture to adorn the gardens by the likes of Henry Moore, Theodore Maillot, Louise Nevelson, Pablo Picasso, Constantin Brancusi, Alexander Calder, David Smith etc. The underground art galleries at Kykuit display Nelson Rockefeller's collection of Picasso tapestries while the coach house contains his collection of carriages and antique automobiles.

Gifted to the Public

In 1976, Nelson Aldrich Rockefeller donated Kykuit to the National Trust for Historic Preservation, having long spoken of his desire to allow the public to enjoy the many mansions in the Hudson Valley. His donation was said to be entirely in keeping with, "the man, his upbringing and his career in public life". By giving it to the National Trust rather than the government, he ensured it would be well maintained and accessible to the public while not encroaching on other members of the Rockefeller family still living on the vast estate.

The Rockefeller Family Gardens: An American Legacy By Larry Lederman

Abby Aldrich Rockefeller: The Woman in the Family By Bernice Kert. Introduction by David Rockefeller

On His Own Terms: A Life of Nelson Rockefeller By Richard Norton Smith

The Architecture of Delano & Aldrich By Peter Pennoyer & Anne Walker