Built in 1849, for Edwin Bartlett (1796-1867) and his wife Caroline Eliza Harrod (1808-1893). Located in the Hudson Valley, three miles from Tarrytown, the estate would become better associated with William Avery Rockefeller Jr. (1841-1922), when the The New York Times considered it to be, "second only in beauty and cost" to Biltmore, the largest domestic property in the United States built by George Washington Vanderbilt II (1862-1914). The 204-room castle was demolished in 1942 and the land on which it stood is now the Rockefeller State Park Preserve....
zoom_in 20 images 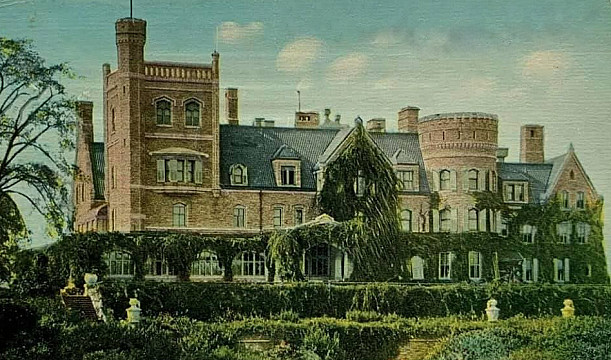 Rockwood was built on land overlooking the Hudson River that was originally part of the estate granted to Frederick Philipse (1626-1702). The home he built that still stands today, Philipse Manor Hall, neighboured Rockwood to the south. After the Revolution, the land passed to the Beekman family and became known as "Beekman's Forest".

"One of the Most Ornate and Beautiful Country Seats in America"...

In 1848, Edwin Bartlett purchased 150-acres of land within Beekman's Forest from Catherine A. S. Mackenzie. Having made a fortune in South America, Bartlett acquired the property in the same year that he co-founded the Pacific Mail Steamship Company - then deemed a highly speculative venture, but whose success vastly increased his fortune. He was the uncle of the celebrated Civil War General William Francis Bartlett. His wife, Caroline, was a niece of Thomas Boylston Adams, brother of John Quincy Adams (1767-1848), the 6th President of the United States with whom Caroline regularly corresponded.

Bartlett employed the British architect Gervase Wheeler (1815-1889) to build the home that he would name "Rockwood". Designed in the popular Gothic style, its facade measured 150-feet across and on its completion it was said to be one of the most splendid mansions in Tarrytown. Situated on top of a hill, 500 feet from the river, the house commanded a majestic view of the Hudson to the west; and to the east, the irregular, picturesque hills and valleys of Westchester. He employed 80-men to work on the estate which was managed by a Mr Leuchars. The Bartletts were particularly close friends with Washington Irving who frequently came to visit them from his nearby home, Sunnyside.

When the Bartletts afterwards moved to Miramonte, Mrs Bartlett kept an oil painting of her beloved Rockwood that she proudly showed to the architect of their new home.

William Aspinwall was primarily a shipping merchant; considered honest and pious, he was also a fearless international entrepreneur and an avid art collector who co-founded the Metropolitan Museum of Art as well as The American Society for the Prevention of Cruelty to Animals. Both sides of his family were prominent in shipping and when his parents married in 1803 their two firms merged to create Howland & Aspinwall, generating huge profits in the Chinese Opium trade and dominating the Pacific Ocean trade. By 1837, Aspinwall's fortune was said to have been greater than that of Vanderbilt's.

The Aspinwalls lived quietly at Rockwood, then described as, "a beautiful chateau" with a castellated appearance. They made constant improvements to their home and filled it with their magnificent art collection. The hall of 16-feet in width and height was wainscoted in walnut that had been both designed and painted in Paris for Mr Aspinwall. In attempting to describe the 20-x-30-foot library with its walnut bookcases, the Art Journal marvelled in 1875 that the, "sombre, rich beauty" of the room could "scarcely be described".

The mansion and its 200-acres of grounds were meticulously cared for under the Aspinwalls. The lawn was interspersed with a great number of native and foreign trees, and it was said to have been remarkable for the variety and beauty of its surface.

William Aspinwall died in 1875 and Rockwood seemed to pass in equal shares to his wife and children. Their younger son, the Rev. John Abel Aspinwall (1840-1913), owned the property north of Rockwood, but it was the death of their elder son, General Lloyd Aspinwall (1835-1886), that prompted the family to part with the estate. The charismatic Lloyd Aspinwall had succeeded his father as President of Howland & Aspinwall. During the American Civil War, he served as the aide-de-camp to General Ambrose Everett Burnside (1824-1881) at the Battle of Fredericksburg and just prior to his premature death he co-founded and became the first president of the Jekyll Island Club.

William Avery Rockefeller, Jr. (1841-1922) was the younger brother and business partner of the world's first billionaire, John D. Rockefeller (1839-1937) who built nearby Kykuit. He was said to have been interested in Rockwood before Lloyd Aspinwall's death and when Lloyd died in 1886, the Aspinwall family sold the property to him for $150,000.
On taking ownership in 1886, Rockefeller and his wife, Almira (1844-1920), expanded the estate's holdings to 1,000-acres and then, according to all sources, tore the old mansion down. Certainly, some of the materials from the old house were used for the two new stables and the old stones that remained, "sufficed for but a portion of the foundation".

However, if one stops to compare the old mansion to the new one, it quickly becomes apparent that there are some striking similarities between the two, and not only in style:
If the original corner tower was not retained, then an almost identical replica was rebuilt on the same spot. As with the carriage porch, if the original was destroyed, then a copy of it was incorporated onto the front of the new mansion. Furthermore, an article in The Decorator and Furnisher published in 1890 stated that the main, "hall must have been one of the limitations imposed by the old plan since its space does not count as it should," suggesting that the original was hall was kept. Either way, these observations reveal that the Rockefellers were not - as is often assumed - unsympathetic towards the old mansion, maintaining its castellated appearance and the core of the interior.

Rockefeller hired the architect Ebenezer L. Roberts to build his new home of 204-rooms at a staggering cost of $3 million. When Roberts died in 1890, Carrere & Hastings took over from him to complete the interior; while the 26-acres of gardens, the ornamental trees and the carriage trails were all laid out by Frederick Law Olmsted (1822-1903). Initially intended to be a summer home, the Rockefellers ended up living here most of the year.

The new Rockwood was 174-feet long and 104-feet wide. The walls of local granite on the foundation (that went down in places to 30-feet) and first floor were 3.5-feet thick and on the second and third floors, 2-feet thick. The two terraces that surrounded the house and the carriage porch too were covered in ivy. The corner tower rose 80-feet into the air and the top room of the round tower was Rockefeller's smoking room.

The interior was on an equally large scale: the circular hearthstone of just one of its fireplaces measured a colossal twenty feet across. It was richly decorated throughout with marble, onyx and carved oak. There were 14-master bedrooms with baths and 15-bedrooms for the servants, who when working were resplendent in their liveried uniforms.

Rockwood was also a working farm incorporating several large outbuildings, including the stone ice house with a capacity of 400-tons and separate rooms for meats, vegetables etc. Swans and ducks swam in the ponds; there was a poultry house and an aviary for rare birds; and, Jersey cattle and Southdown sheep grazed in the surrounding meadows

From Country Club to Countryside

Rockefeller died in 1922 and Rockwood passed to his nephew, John D. Rockefeller Jr. (1874-1960). He sold the estate the following year and it became the "Rockwood Hall Country Club". During the Great Depression, the club suffered and finally went bankrupt. Rockefeller bought it back in 1941 and took the decision to demolish the mansion the following year. In 1946, he gave ownership of what remained of the estate over to his third son, Laurance Spelman Rockefeller (1910-2004), who in 1998 donated the remaining 88-acres to the State of New York, becoming the Rockefeller State Park Preserve:

The most notable feature of the Preserve is the system of carriage roads... Designed to complement the landscape, the carriage roads, many of which are accessible, allow visitors to experience and enjoy the natural wonders of the area. These scenic paths wind through wetlands, woodlands, meadows, and fields and past streams, rivers, and lakes while traversing wood and stone bridges. One road passes by the foundation of Rockwood Hall... Its Olmsted-designed landscape with its panoramic view of the Hudson River remains a spot of beauty for all who visit.

William Francis Bartlett: Biography of a Union General in the Civil War By Richard A. Sauers

Living In The Past: An Owner's Guide to Understanding & Repairing an Old Home By Scott Austin Sidler