Completed in 1792, for Colonel Joseph Nightingale (1748-1797) and his wife Elizabeth Corlis (1750-1837). From 1814 to 1985, it was home to five generations of the prominent Brown family, the first of whom was a nephew of the builder of the John Brown House. Also known as the "John Nicholas Brown House," it is believed to be the largest surviving 18th century timber-frame house on the continent. After Mrs Brown died in 1985 her children donated the house to Brown University and today it serves as the John Nicholas Brown Center for Public Humanities and Cultural Heritage....
zoom_in 6 images 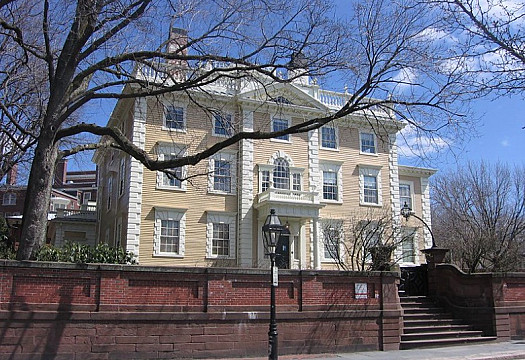 Colonel Nightingale was a partner in the firm Clark & Nightingale and one of the leading merchants in Providence. He commissioned local architect Caleb Ormsbee (1752-1807) - also known for the similarly-styled Thomas P. Ives House - to build him a new mansion. The Colonel died just five years after the house was completed, but his widow, Elizabeth, continued there with their children until 1814. That year, she sold it to Nicholas Brown Jr., for whom Brown University takes its name. It stayed in the Brown family for the next five generations until they donated it to Brown University in 1985.

The house came to Nicholas' younger son, John Carter Brown (1797-1874), who worked for the family business (Brown & Ives) but is best known as a book collector, and after his father's death in 1841 he devoted himself entirely to this passion. He added the carriage house in 1853 and a two-story addition to the south of the house in 1858. However, he made  the most iconic addition to the house between 1862 and 1864, hiring Richard Upjohn to build the library wing to house his vast collection of books.

From 1874, the house passed to Brown's eldest son, John Nicholas Brown I (1861-1900), who had also inherited his father's passion for books. He is most famous for donating his father's library to Brown University, known today as the John Carter Brown Library. In 1890, as a gift for his wife, John hired America's best-known landscape architect, Frederick Law Olmsted, to redesign the acre of gardens.

John died in the same year that his only son was born. His son, John Nicholas Brown II (1900-1979), was immediately heir to a fortune of certainly more than $10 million (the figure is often exaggerated, in one case reaching $100 million!). On coming of age in 1921, he carried out an extensive renovation project on the house, redecorating it in the Colonial-Revival style with the use of traditional American motifs. He and his wife, Anne, lived here during the winters while summering at Harbour Court in nearby Newport.

After Mrs Brown in 1985, her three children donated the property to Brown University. They carried out an 8-year renovation project on the house and in 1989 it was declared a National Historic Landmark. Today, it serves as the John Nicholas Brown Center for Public Humanities and Cultural Heritage.

Historic Tales of Colonial Rhode Island:: Aquidneck Island and the Founding of the Ocean State By Richard V. Simpson

Sons of Providence: The Brown Brothers, the Slave Trade, and the American Revolution By Charles Rappleye