Completed in 1906, for the widowed Mrs Natalie (Dresser) Brown (1869-1950) and her young son, John Nicholas Brown II (1900-1979). It was modelled for the most part after her brother-in-law's ancestral seat in Normandy, Chateau d'Osmoy. Natalie lived there until her death, having shared the house during the summers with her son and daughter-in-law, Mrs Anne Brown, who otherwise wintered at the Nightingale-Brown House. After Anne died, her children placed the house on the market. From 1988, it has been the clubhouse of the prestigious New York Yacht Club (NYYC) at Newport....
zoom_in 7 images 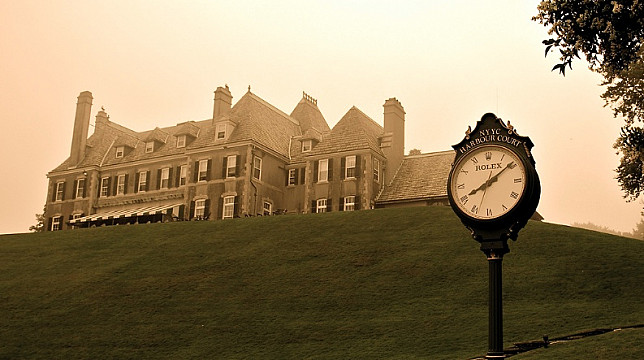 Natalie was an heiress descended from some of New York's oldest families and the sister of Edith who lived with her husband, George W. Vanderbilt, at Biltmore. Natalie's husband's family had been among the most prominent in Rhode Island since the 18th century and gave their name to Brown University in Providence. The couple planned to spend their first season at Newport in 1900, leasing its oldest chateau, The Orchard.

A Home for "the Richest Baby in America"

Tragically, only days apart, her husband John Nicholas Brown I (1861-1900) and his unmarried brother, Harold, died in May of that same year before either of them reached the age of forty. Natalie was now a young widow with an infant son, John Nicholas Brown II (1900-1979). The boy was immediately dubbed "the richest baby in America" having unwittingly become heir through his father and uncle to a combined family fortune in excess of $75 million. As the trustee of her son's estate, in his name Natalie paid $150,000 for Riviera, a beautifully positioned waterfront villa in Newport.

In 1903, Natalie demolished the existing property and commissioned Ralph Adams Cram (1863-1942) to design her a new home, directly inspired by the Chateau d'Osmoy which was the ancestral home of her French brother-in-law, the Vicomte d'Osmoy. The New York Times described its situation as, "one of the choicest in Newport (containing) 8.75-acres and 500-feet of waterfront... with deep water and good anchorage for yachts".

Initially quoted at $103,000, construction started in 1904 under Robert W. Curry, of Newport. It took one more year than expected to complete and was finished by the summer of 1906 when mother and son moved into their new 20-room home.

In 1915, Mrs Brown extended the house with a two-story addition on its east side that included a conical tower and a "sleeping porch" for the benefit of her teenage son's constitution. After Mrs Brown died, her son enclosed the porch and transformed it into a bathroom that made the most of its spectacular views across the water.

Salt in the Veins

Growing up by the sea had a profound impact on both the private and public life of John Brown: He grew up to be a passionate, competitive yachtsman and following the War President Harry Truman appointed him Assistant Secretary of the Navy. In 1949, his yacht Bolero won the Newport-Bermuda Race (a feat repeated in 1950, 1954 and 1956) with a time that wouldn't be beaten until 1974. He was elected Commodore of the New York Yacht Club (1952-1954), the Ida Lewis Yacht Club and the Newport Yacht Club.

When John grew up and married Anne Kinsolving (1906-1985) the couple gave John's mother full rights to live in the house (paid for entirely by John's estate) as though as it was her own and she died there in 1950. John and Anne summered each year at Harbour Court with their young family but lived for the rest of the year at the Nightingale-Brown House which had been in the Brown family since 1814.

John Brown died on board his yacht at Maryland while celebrating his son's 45th birthday. Six years later his widow, Mrs Anne Brown, succumbed at Harbour Court and their children placed the chateau on the market. In 1987, it was sold for $4.5 million to the New York Yacht Club (NYYC) and opened the following year as its clubhouse at Newport. John Brown would have been happy - he had often mused that it would make a good clubhouse.

The Billionaire and the Mechanic: How Larry Ellison and a Car Mechanic Teamed up to Win Sailings Greatest Race, the Americas Cup, Twice By Julian Guthrie