Completed 1788, for John Brown (1736-1803) and his wife Sarah Smith (1738–1825). The three-story brick mansion took two years to build and is considered a perfect example of late Georgian/early Federal architecture. On completion, occupying 19,000 square feet of living space, it was one of the largest houses in the country, larger even than the Bingham Mansion in Philadelphia. Since exquisitely restored by the Rhode Island Historical Society and furnished throughout with the Brown's original 18th century furniture, as house-museums go today, very few on the continent can rival it....
zoom_in 5 images 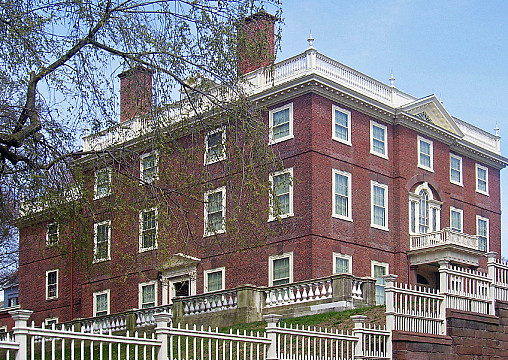 John Brown and his brothers were leading merchants in Providence, the town of which was co-founded by their ancestor the Rev. Chadd Brown (d.1650). Their family name is forever remembered as that given to the ivy-league university co-founded by them in 1764 and so named for John's nephew, Nicholas Brown Jr. (1769-1841).

John Brown was the first Rhode Island merchant to enter the China trade; the founder and President of the first bank in Providence; and, in addition, owned 210,000-acres in the Adirondacks. Nonetheless, his name is chiefly remembered for being the first American to be prosecuted for slave-trading, two years before he was elected to the United States House of Representatives. The Brown brothers money was principally made through trade with the West Indies, ie., in rum, slaves and molasses. However, one of the brothers, Moses Brown (1738-1836), came to disagree with the family's involvement with slavery. Moses became a Quaker and was soon Rhode Island's leading opponent of the slave trade, co-founding the Providence Society for Abolishing the Slave Trade.

In 1769, John acquired from his brother, Nicholas Brown Sr. (1729-1791), the land on which he would build his mansion in Providence. It stood on what was then a large hill with a clear view over the water. Its borders were Benefit Street to the west; Charlesfield Street to the north; Power Street to the south; and, Brown Street to the east.

By 1786, Brown's personal fortune was one of the largest in the country and he employed another brother, Joseph Brown (1733-1785), to both design and build his new home - the first mansion erected in Providence. Brown himself also contributed to the overall design that on the English exterior incorporated both modern (Adamesque) and more traditional Georgian architecture while the interior leant towards the French style of the period.

On the first day of 1788, the house itself was built but still unfurnished. Nonetheless, Brown held the first of many parties there in the form of a wedding reception for his daughter, Abigail Brown (1766-1821), and her new husband John Francis (1763-1796). "Blind Man's Bluff" was among the games played that night and one of the bridesmaids, Ann Eliza Goddard (1790-1821), gave this account of the new house:

On Friday, Mr Brown gave a smart ball at his house on the hill indeed it will be a most elegant place, we had four rooms lighted up on the second story - one for supper another for cards and two for dancing - we danced in the large chambers of the hall and continued it through the door in to the next room which made the whole length of the house.

The rooms are already gentile but will be elegant when finished and furnished. Two of the largest and most elegant mirrors I ever saw ornamented the rooms - standing in the door which is in the middle of the partition you are just in the line with them, so that at the head of the dance you can look down through & a venerated crowd of sprightly dancers end if you are a little elevated above the common race of mortals or chance to be made so by high heels or long feathers you can then have the pleasure of contemplating (underlined) your image and seeing it reflected fifty two feet - so that at the foot of the dance you may do the same - the effect was charming to look in and see such a moving multitude.

Prior to its construction, as various members of the family travelled about the colonies, John requested that en route they stop off at the grandest houses to take measurements so that his mansion would be counted among them. It certainly lived up to expectations: after staying as a guest in 1789, John Quincy Adams (1767-1848) declared Brown's home to be, "the most magnificent and elegant private mansion that I have seen on the continent". Another distinguished visitor was George Washington (1732-1799).

John Brown was among the new wave of merchant princes turning their backs on the traditional Quaker sobriety that had previously dictated the style of many houses in New England. The exterior is particularly striking and harmonious, built of red brick and trimmed with white wood with sandstone lintels and columns; the doorway is one of the best in Providence and the balustraded parapet is outstanding.

He spared no expense decorating his home with the best furniture that he could acquire from both Europe and the Colonies: Inside, the house is decorated with marble busts from Versailles, carved doorways, columns, cornices and lavish plaster-ornamented ceilings. Much of the furnishings seen today were designed by local artisans such as William Clagget and a block-front secretary fronted with nine shells by Goddard & Townsend - one of the finest existing examples of American Colonial furniture and worth millions.

Brown died in 1803 and his widow and children continued to live there until she too died in 1825. The house then passed to Brown's only son, James Brown III (1761-1834). Maintaining the house itself, he sold a parcel of the land to the west of the house on Benefit Street to his first cousin, Robert Hale Ives Sr. James died unmarried in 1834, leaving the house, furniture and land as far as Brown Street to his sister, Sarah, the wife of Charles Herreshoff. To his nephew, John Brown Francis (then serving as Governor of Rhode Island), James left a 3-acre plot of land to the east of the house, on Power Lane.

When Mrs Herreshoff died in 1846, she bequeathed her property to her young grandson, James Brown Herreshoff (1834-1930), with provision that until he reached adulthood her three daughters would be allowed to remain in the house. In 1852, James signed an agreement with Sarah's daughters and deeded the house to their late mother's elderly aunt, Hope Brown (1773-1855), the widow of Thomas Poynton Ives. The following year, Mrs Ives subdivided the property between her two sons, the previously mentioned Robert Hale Ives Sr. (1798-1875) who received the house itself and the land to the west, while his brother, Moses Brown Ives (1794-1857), received the land to the east of the house.

In 1854, Robert Ives gave the house to his eldest daughter, Elizabeth Amory Ives (1830-1897), as a wedding present on her marriage to William Gammell (1812-1889), while Robert built himself a new home, Hale Ives House, on the land left to him along Benefit Street.

The Gammells redecorated the interior house in the rich colors then fashionable in the Victorian period and used the house as their winter residence. In 1875, it was also Elizabeth who built the iron staircase and most notably the three-story L-shaped addition to the back of the house. They used this for further servant’s quarters which now connected the main house to the original 18th century outbuildings.

Sold out of the Brown family (1901) to Marsden Perry

On Elizabeth's death, she left the house to her two youngest children, Harriet Ives Gammell (1864-1933) and Helen Louise Gammell (1868-1951). Since the girls spent most of their time at nearby Newport or travelling in Europe, they put the house up for sale in 1901 when it was purchased by Marsden Jaseal Perry (1850-1935), a prominent industrialist, philanthropist and art collector.

Perry made several significant changes to the interior of the house and the grounds, notably erasing the Hale Ives House. Inside, he modernized the entry hall and added moulded plaster ceilings to the first floor eastern rooms while painting the northeast library walls with plaster and stucco. He enlarged the dining room by joining two rooms together and removing the servants staircase. He replaced the soft pine floor for hard Carolina pine; fitted central heating, electricity and two elevators; and, redid the bathrooms with Italian tiles and porcelain fittings. Well-known as an art collector, Perry also decorated the house with Chippendale gilt mirrors and deep mahogany panels, furnishing it throughout with his notable collection of 18th century English furniture.

Reclaimed by the Browns and becoming a House Museum

Perry died in 1935, and the house briefly returned in to the possession of the Brown family when his widow sold it to John Nicholas Brown II, of the Nightingale-Brown House and Harbor Court, home of the prestigious New York Yacht Club of which he was Commodore. Though he never lived in the house, Brown added his own personal touch to it by fitting a rare set of wallpaper panels in the dining room that depict Washington's inauguration at New York City. The wallpaper was drawn and designed by Nancy Vincent McClelland (1877-1959), considered to be the first female American interior designer, and each of the panels were individually painted by artists as part of the Work Progress Administration.

In 1942, Brown donated his family's ancestral home to the Rhode Island Historical Society. They set about reproducing the decor to it's original form and color, that included using copies of the original French wallpaper. The magnificently restored interior has been brought back as closely as possible - both structurally and decoratively - to resemble it's original 18th century self. Today it is open to the public as a house-museum and much of the furniture seen within was provided by the Brown family. In 1968, the John Brown House was declared a National Historic Landmark.

Sons of Providence: The Brown Brothers, the Slave Trade, and the American Revolution By Charles Rappleye

Brown: The History of an Idea By Ted Widmer

The Makers of Modern Rhode Island By Patrick T. Conley

God, War, and Providence: The Epic Struggle of Roger Williams and the Narragansett Indians against the Puritans of New England By James A. Warren