Built circa 1700 for William Penn (1644-1718), founder of Pennsylvania, and his first wife Gulielma Maria Springett (1644-1694). In the 1890s, when it was the home of the Pryce family, Penns was often frequented by the great American industrialist and philanthropist, Andrew Carnegie (1835-1919), who was then living at nearby Buckhurst Park and particularly admired one of Penns' old Sussex fire-backs. It was enlarged in 1737 by Penn's grandson; reconstructed in places during the 1830s; and, extensively renovated between 1957 and 1959. It remains a private home.
zoom_in 8 images 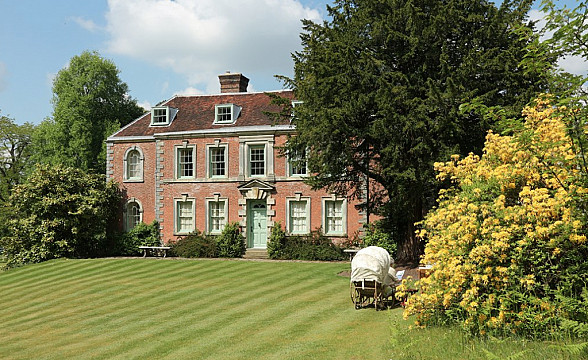 Gulielma's family had long been established in the Sussex iron industry and when she married Penn in 1672, as part of her dowry she brought with her Rocks Farm. Penn replaced the farmhouse with the core of the house found there today. The rear of Penns shares a similarity to Slate Roof House, Penn's townhouse in Philadelphia (1699-1701).

On Osborn's death in 1785, he left the property to one John Bishop (d.1828), who appears to have been a relation. At about this time, it seems to have been leased to one Thomas Adams who in an affidavit dated 1856 stated, "I have nearly all my life resided on the Penn's Rocks Estate, formerly belonging to Abraham Osborne". In 1852, it had been sold to the ap Rhys Pryce family, who presumably took possession after Adams' death.

In 1925, the Pryce family sold Penn's to the poetess, Dorothy Wellesley (1889-1956) Duchess of Wellington. Better known as Lady Gerald Wellesley, she was a poet and authoress, greatly admired by W.B. Yeats who spent much time with her at Penn's. She made a number of improvements to the garden, laying it out much as it is seen today. After she died, Penn's was acquired by Patrick Gibson (1916-2004) and his wife, Dione Pearson (b.1920).

The Gibsons, with guidance from the celebrated Anglo-American landscape architect, Lanning Roper (1912-1983), carried out extensive renovations to the house, gardens, woodland and parkland between 1957 and 1959. In 1975, Gibson was created a Life Peer and chose the title "Baron Gibson of Penn's Rocks". He was Chairman of the National Trust from 1977 to 1986. The property remains a private house and is to be respected as such.