Built from 1882 to 1885, for Potter Palmer (1826-1902) and his wife Bertha Honoré (1849-1918). It was the largest house ever erected in Chicago and the exterior was designed by Cobb & Frost while its equally sumptuous interior was executed by the Herter Brothers and featured styles that varied from Moorish to East Indian and Louis XV etc., etc. Its primary role was to house the Palmer's magnificent collection of art, notably Mrs Palmer's collection of Impressionists such as Monet, Degas, Picasso, and Renoir. In preparation for the 1893 World's Fair they added a further art gallery, and in stark contrast to Mrs Dodge's Rose Terrace, it was famous for being devoid of external doorknobs or locks so that entry was only possible when admitted from the inside. In total, it cost over $1 million to build and furnish, and its presence established the North Side Gold Coast, drawing the elite away from Prairie Avenue and the South Side....
zoom_in 11 images 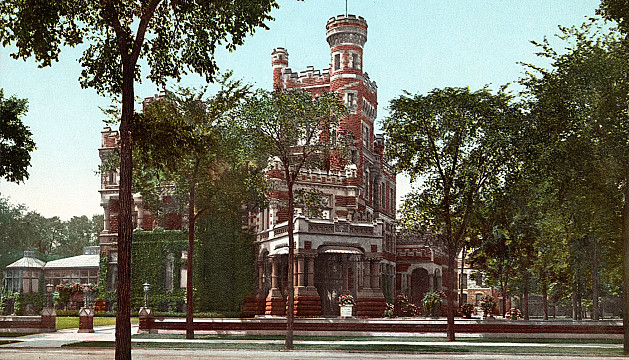 For the next three decades, Mrs Palmer reigned here as the undisputed leader of Chicago's Gilded Age society. After she died in 1918, her younger son, Potter Palmer Jr., made it his home for the next ten years. In 1928, he sold it to Vincent Bendix - inventor of the first effective starter motor - for $3 million who remained here for just five years. After the Wall Street Crash, Bendix contemplated razing it so the Palmer brothers stepped in and bought it back for $2 million. They occasionally opened it up for the odd social event, but the mansion effectively stood empty, described as, "a vast echoing shell". Between 1942 and 1943, it was briefly repurposed by the Red Cross as a surgical dressing center for soldiers returning from Europe but by 1950 it stood only as, "a ghost of an era past almost forgotten”. It was demolished in February that year in favor of a 22-story apartment block, four days before the 21st anniversary of another of Chicago's famous massacres.

The Age of French Impressionism: Masterpieces from the Art Institute of Chicago By Gloria Groom

Chicago's Grand Hotels: The Palmer House, The Drake, and The Hilton Chicago By Robert V. Allegrini