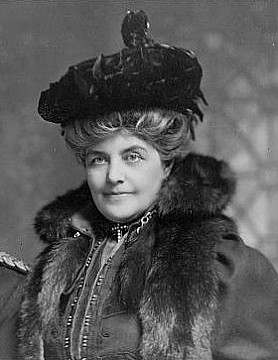 She was born in Louisville, Kentucky, and was brought up in Chicago where her father moved in 1855 as one of the city's earliest and most influential real estate developers. She graduated from the Convent of the Visitation in Washington D.C. On July 8th, 1870, she married Potter Palmer -23-years her senior - who'd recently sold his shares in his department store for $7 million to Marshall Field and Levi Leiter.

She became a leader of society, dedicating herself to many local and national causes. While serving as Chairman of the Board of Lady Managers for the Columbian Exposition World's Fair in 1893, she inadvertently found herself behind the invention of the brownie: at the Palmer House Hotel in Chicago, she asked the kitchen staff to whip up a portable dessert that could be served at the World's Fair. The resulting creation - a walnut-studded, apricot-glazed brownie - was a hit and aside from being served at the hotel ever since, the brownie itself is famous the world-over. In 1900, President McKinley appointed her the only female member of the National Commission representing the U.S. at the Paris Exposition where the French awarded her the Legion d'Honneur.

After her husband died in 1902, she took up the reins of his various enterprises and soon became internationally recognized not only as one of the few, but one of the most successful female business-women in the world. Her collection of Impressionist paintings were displayed at the Potter Palmer Castle and in later life she ran a large scale farm and ranch at Sarasota in Florida. She and her husband were survived by two sons.

Suncoast Empire: Bertha Honore Palmer, Her Family, and the Rise of Sarasota, 1910-1982 By Frank A. Cassell