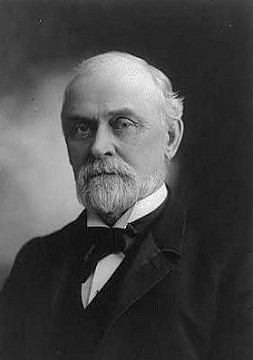 He was born at Potter's Hollow in Albany Co., New York, to a prosperous Quaker farmer. After leaving school in 1844, he worked as a clerk at a dry goods store in a nearby village before setting up on his account. On visiting Chicago in 1851 and recognizing its potential he founded Potter Palmer & Co., a department store on Lake Street focusing on women's clothes where he first introduced the "no questions asked" returns policy. Expanding his premises, his was the first shop to advertise with large windows and price comparisons. In 1865, he was advised to retire on account of ill health, but instead shared his workload by bringing in Marshall Field and Levi Leiter and established Field, Palmer, Leiter & Co. which became the famous Marshall Field & Co.

In 1867, he sold his shares in the department store and invested in real estate which included leasing new premises to his former business partners. He was largely responsible for developing State Street on which he most famously built the Palmer House Hotel. When the Great Fire ravaged Chicago in 1871 he lost the home he'd built as a wedding present for his wife; a hotel; and 32-buildings on State Street. He borrowed $1.7 million and dedicated all his efforts to rebuilding his city, notably developing Lake Shore Drive where he built the Potter Palmer Mansion and which became the preferred enclave of Chicago's elite. In 1870, he married Bertha, daughter of Henry H. Honoré, one of Chicago's earliest and most influential real estate developers. Mrs Palmer (23-years his junior) was the sister-in-law of Frederick Dent Grant, son of President Ulysses S. Grant. She was a Patron of the Arts and Chicago's leading society hostess. They had two sons.

Love Under Fire: The Story of Bertha and Potter Palmer By Drama/Documentary

Chicago's Great Fire: The Destruction and Resurrection of an Iconic American City By Carl Smith