Built 1883, for Robert Leighton Stuart (1806-1882) and his wife Mary McCrea (1810-1891). Their Second Empire mansion had been built specifically to house Stuart's vast collection of books, paintings and cabinets displaying natural minerals. It was sold in 1896 to William C. Whitney who spent $3.5 million transforming the house/museum into a Beaux-Arts "Palace of Art," known as the Whitney Mansion....
zoom_in 5 images 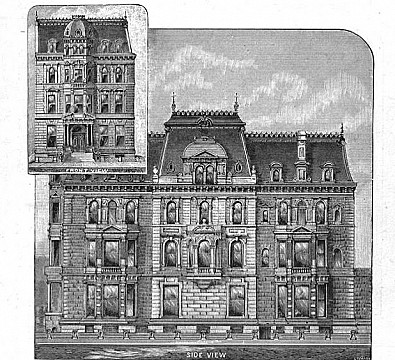 Stuart and his brother, Alexander Stuart (1810-1879), made their fortune refining sugar. As employers, their popularity was never more evident than during the New York Draft Riots of 1863, when of their own free will, their workers successfully defended against the angry mob that threatened to over-run their factories. Remembered among the most generous of New York's philanthropists, Robert Stuart co-founded the American Museum of Natural History and his widow left their $5 million fortune almost entirely to charity.

Stuart and his wife were passionate collectors of books, art and antiques. But, by about 1880, their home of the last twenty odd years at 154 Fifth Avenue was no longer large enough for their sizeable collection. Employing architect J. William Schickel (1850-1907), they started to build a new mansion. Sadly, Stuart was not to see the completion of his new house, dying in December, 1882, when The New York Times reported,

The new residence which Mr. Stuart was building at 68th street and 5th avenue was to cost $350,000, and the owner expected to occupy it next Spring. It is very nearly completed, and will prove one of the most notable ornaments of the avenue. It has a frontage on 5th avenue of 55 feet, and on 68th street of 136 feet, and the general style of the architecture is the Renaissance… The flagstone in front of the main entrance is the largest ever quarried and laid in one piece, being 26 feet 6 inches long, 15 feet 6 inches wide, and 9 inches thick, and weighing 430 tons.

The more than capable Mrs Stuart was left to finish their home. She oversaw all of the interior designs and helped create the art gallery that would later become famous as Whitney's ballroom. On it's completion, the mansion became something of a private museum for Stuart's 11,888 books, 1,963 pamphlets, 240 paintings and cabinets full of rock, minerals and archaeological fragments etc. The collection was left to the Lenox Library which has since become part of the Frick Collection and the NY Public Library.

The house itself was a combination of French Second Empire and Renaissance Revival, that embodied a profusion of heavy oriels, wrought iron balconies, dormer windows in a mansard roof and cast iron cresting. Not including the price of the land itself, it ended up costing Mrs Stuart $640,000. She happily lived there until her death in 1891.

The Stuarts died without children, and what remained of their fortune was in the hands of their executors to be administered for further charitable causes. Several offers were made on the mansion but none satisfied the executors until 1894. It was purchased for $675,000 by Amzi Lorenzo Barber (1843-1909) and his wife Julia Louise Langdon (1844-1912).

The Barbers carried out several alterations, notably modernising the exterior. They held several parties and musical evenings, but after two years (1896) sold the house to William C. Whitney (1841-1904) and his new (second) wife, Edith Sybil May (1854-1899).

The Whitneys briefly leased the house to the distinguished politician Levi P. Morton (1824-1920), former 22nd Vice President of the United States in the administration of Benjamin Harrison (1833-1901) and 31st Governor of New York. When Whitney's son, Harry Payne Whitney (1872-1930) returned from his honeymoon, Whitney gifted his brownstone at 57th Street and Fifth Avenue to Harry while he and his new wife set about transforming No. 871 into the stylish Beaux-Arts masterpiece, Whitney Mansion