Built in 1899, for Charles S. Wheeler (1863-1923) and Lillian Marsh (1863-1952). Their rambling lodge designed by Willis Polk of San Francisco was a series of inter-connected buildings that followed the Horseshoe Bend on the McCloud River. Wheeler leased a portion of his land to his client, Phoebe Hearst, on which she built her Bavarian castle, Wyntoon. In 1934, the Wheeler's children sold the lodge and remaining land to Phoebe's son, William Randolph Hearst, who tore it down except for one timber-framed wing and re-used the stones to remodel it as a Gothic guesthouse....
zoom_in 17 images 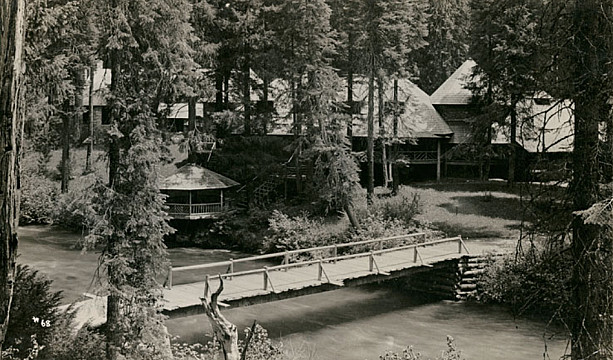 Charles S. Wheeler, of San Francisco; Regent of the University of California

Charles Wheeler was the Regent of the University of California and his wife, Lillian, was an artist who trained under the famous landscape artist William Keith. They acquired this land as a fishing and hunting retreat from the widowed Mrs Lydia Field Sisson, owner of a picturesque inn under nearby Mount Shasta. Naming their shingle-style lodge "The Bend," it was specifically designed to blend in with its wild environment.

The Dining Room was centrally placed to take in all three sides of the fast-flowing waters and steps from its wraparound porch led down to an octagonal gazebo built within a tree overhanging the rapids. The library was filled with 800-books and was decorated with hundreds of Native American baskets. Wheeler also requested a 'Fish Tower' as, "a high study with a view, and two windows which were aquariums containing local trout". Over the door was etched: "Piscatoribus Sacrum": Latin for "Sacred to Fishermen".

Wheeler was primarily a lawyer and among his distinguished clientele he counted Mrs Phoebe Hearst, the widow of Senator George Hearst who died some some ten years earlier leaving her as sole heir to his $19 million fortune and vast, valuable landholdings. In 1900, Wheeler invited his wealthy client up to what was then known locally as the Wheeler Ranch, to join his family at what would be their first summer there. She was immediately smitten by the singular and romantic wildness of its location, and then quite brazenly asked to buy it. Wheeler politely declined. However - probably now regretting his hasty invitation - Phoebe would not let up and when the money on the table became too hard to ignore, they reached an agreement whereby she purchased a 99-year lease to the property.

In 1902, Mrs Hearst started work on her 7-story castle, Wyntoon. Wheeler was "privately furious" as an unwritten part of their agreement had been that she would refrain from building anything ostentatious, but otherwise their relationship remained unchanged.

In 1911, the Wheelers invited the Austro-Hungarian artist, naturalist, botanist and mountaineer Edward Stuhl (1887-1984) and his wife Rosie to live on the property which started their love affair with California, and particularly Mount Shasta, where they would remain for the rest of their lives. Stuhl published Wildflowers of Mount Shasta from his base at The Bend. After Wheeler died in 1923, he accepted a job at Wyntoon but remained as the caretaker and custodian of The Bend.

Sacred to Fishermen, Not Multi-Millionaires...

In 1929, Mrs Hearst's son, the media mogul William Randolph Hearst, wrested ownership of Wyntoon from his cousin and after his mother's castle was lost to fire he recreated a Bavarian Village on the estate. While politely admiring his neighbour's latest whim, Wheeler's son also envisioned the inevitable succession of party-goers who would ruin both his seclusion and hunting. He promptly offered Hearst the lodge and its remaining land. Hearst tore down the old house except for the timber-framed wing that had contained the master bedroom and bore the cornerstone: "The Bend, 1899". Using the original stones, it was redesigned by Julia Morgan in the Gothic-Revival style, becoming another guesthouse with a billiard room and a vast hall for dining or watching movies. 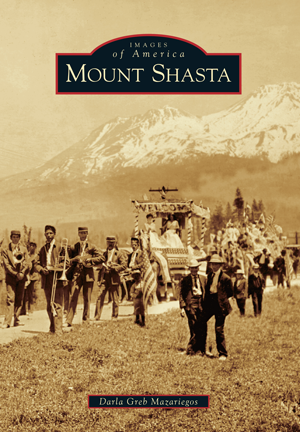 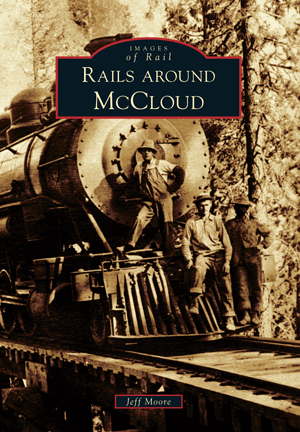 Rails Around McCloud By Jeff Moore