Built circa 1880, for the widowed General James H. Van Alen (1819-1886). This long (1,000 feet), narrow (40 feet) summer cottage was designed by Clarence Sumner Luce (1852-1924) and was built at the comparatively low price of just $13,000. Architecturally, it was a mix of several styles. General Van Alen (like his son, Jimmy) was a well-known Anglophile and the fireplace in the hall featured a large English mantel with a hunting scene carved into it, supported by carved gargoyles. The two-story pentagonal stained glass window bathed the staircase and hall in a kaleidoscope of reds, yellows and blues. The drawing room was the largest room (1,000 square feet) and unusually for the time there was a children's dining room for the old General's beloved grandchildren....
zoom_in 2 images 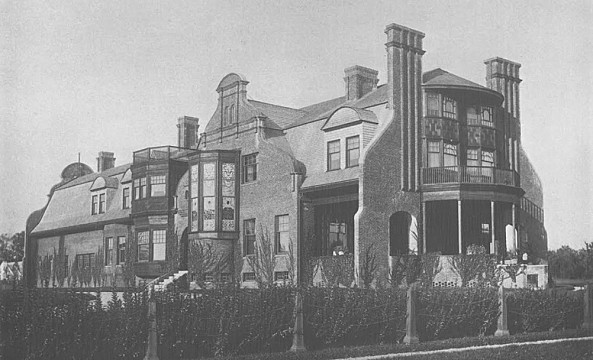 In 1883, the General gave half the property to his only son, James Van Alen, on which he built the spectacular Wakehurst, that still stands today. Sometime after the General died, The Grange was replaced by a garage on the Wakehurst estate.