Built from 1833, for John Insley Blair (1802-1899), the founder of Blairstown, and his wife, Ann Locke (1804-1888). It was described as, "a pleasant home filled with hospitality and comfort," and although he enlarged it over the years, in comparison to Insley Hall which he built at Blairstown Academy and Blair Hall that he built at Princeton University, this - albeit large - farmhouse was not what might have been expected of a man worth $70 million - a man who some say inspired the likes of Rockefeller and Carnegie on the benefits of philanthropy. Towards, the end of his life, "Plain John I." was asked why he didn't live in the same splendor as his son, DeWitt Clinton Blair: "Well, I'll tell you," he said, "I haven't got a rich father as he does"....
zoom_in 2 images 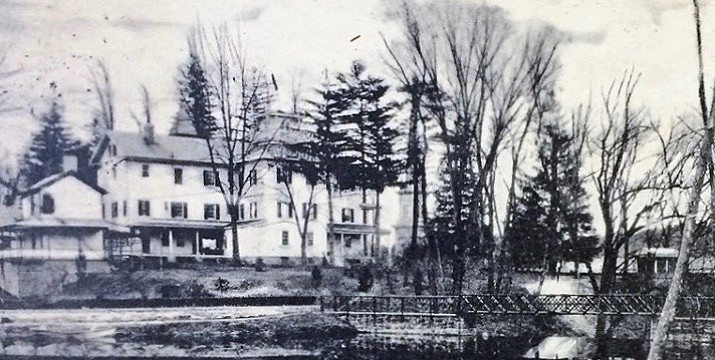 It was from his home in rural Blairstown and on his private rail car (often travelling up to 40,000 miles a year) that Blair - the largest owner of rail mileage in the world - ran his business operations. The house that he built when just 31-years old grew with his success, but could never have been compared to the homes of his peers, eg., Lyndhurst or Ogontz.

Standing on the high ground behind the mill, by the time he died here, the Homestead was a large, square, two-story, frame house painted white with green blinds, with a cupola in the center of the flat roof. It was, "furnished with a sparseness that suggested poverty, but John I. Blair thought it and Blairstown the paradise of the world". Blair was well-known for his simple tastes and his obituary added that, "his garments were usually ill-fitting and shabby, and he looked in his walks much like a figure left over from the last century".

Sometime between 1899 and 1939, it was significantly enlarged (as seen in the pictures) and the lawns and walks were decorated and paved with a collection of millstones from miles around. When he died, Blair's only surviving son was happily ensconced at the Blair Estate in Belvidere, and it is more than likely that the Homestead was passed to his nephews family, the Vails. After the war, it was gifted to Blairstown Academy but over the years it became increasingly run down until it was eventually demolished in 1979.