Completed in 1867, for Jay Cooke (1821-1905) and his wife Dorothea Elizabeth Allen (1827-1871). Their opulent mansion north of Philadelphia was one of the first showpiece mansions of the Gilded Age. In the Northern States, it was comparable in grandeur only to the Lockwood-Mathews Mansion in Connecticut. It served as a girls boarding school before being torn down and replaced by Ronaele Manor....
zoom_in 7 images 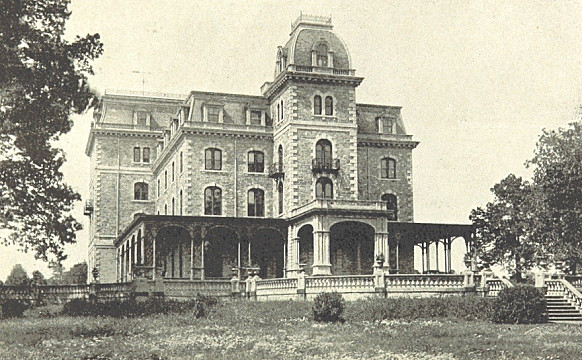 At the close of the Civil War, the future 18th President of the United States, General Ulysses S. Grant (1822-1885), said of Jay Cooke: “Tell him that it is to his labors more than those of any other man that the people of this country owe the continued life of the nation". Cooke was one of America's leading financiers who arranged loans and sold bonds for the government, financing the Union throughout the Civil War.

Named for his Mentor, Chief Ogontz of the Wyandot

In 1865, work began on the construction of Cooke's mansion, overseen by him personally. On its completion two years later he held a house-warming party for 500-guests that included among them his close friend, the previously mentioned Ulysses Grant. He christened his new home "Ogontz" in honor of Chief Ogontz of the Wyandot Tribe, whom he had come to know and respect as a young boy growing up in Ohio. The chief would visit his childhood home for weeks at a time, teaching him wilderness skills and enthralling him with unforgettable tales of bravery and loyalty.

"Dignified, but Not Gloomy"

Their 52-room Italianate mansion stood five stories high on an estate of 380-acres, described as "dignified, but not gloomy". At a cost of $1 million and requiring a staff of 70 to maintain it, it was one of the first showpiece mansions of the Gilded Age to be erected in rural Pennsylvania. The huge stone building was a profusion of porches, towers, and marble balustrades; and, its ceilings were said to be twice the height of normal ceilings. Among the richly decorated rooms were a ballroom, music room, library and more than one drawing room. In the center of the house was a glass court conservatory with palms and rubber plants placed around a sculptured indoor fountain. The top floor contained a small theater with its own stage and seating for 150.

Visitors to Ogontx included the leading American politicians and financiers of the time and in 1871 Cooke hosted the Japanese foreign envoy, Iwakura Tomomi (1825-1883), who had taken the Kyoto Imperial Palace that resulted in the Meiji Restoration.

Broad Verandahs, Sweeping Views, and its own "Ruin"

The 40-acres of landscaped gardens that surrounded Ogontz were greatly admired from the broad verandahs at the rear of the mansion. Sweeping vistas lined with statues had been cut through the woodland to open up the rolling countryside around, and the magnificent lawns featured more statues as well as several fountains. The estate contained a brook, an old mill, a pond, but, perhaps the most striking feature of all was an imitation ruin of an 'old' castle. Outbuildings included a gate lodge at the foot of the long drive, stables, conservatories and greenhouses.

The great financier was not impervious to mistakes and after speculating unwisely in railroad land he declared himself bankrupt in 1873, closing Ogontz the following year. But, he wasn't beaten, he managed to re-pay his creditors and in 1878-79 invested in a Utah gold mine with Jay Gould (1836-1892) that pocketed him a quick $2 million.

He repurchased Ogontz, but by 1881 found the great house too expensive to maintain and moved into Eildon, the next-door property to his daughter, Laura Elmina Cooke (1849-1919) and son-in-law, Charles Dennis Barney (1844-1945). Rumor has it that he spent the next couple of years crossing over to his old estate and peering through the windows of the by-then neglected mansion as the once grand rooms gathered dust.

The Ogontz School for Girls

In 1883, Cooke offered Ogontz for a rent of $15,000 a year to The Chestnut Street Seminary, one of the country's finest finishing schools for young ladies. The mansion became the Ogontz School for Girls and the great rooms were given over to classrooms and dormitories for the one hundred privileged students. Several new buildings for the girls were added to the estate such as the art studio, gymnasium, infirmary and further music rooms, as well as tennis courts and other facilities.

Ogontz continued as a school until 1915 when Joseph Early Widener (1871-1943), the new owner of the vicinity's most famous estate, Lynnewood Hall, expressed an interest in adding its 380-acres to his own. Widener proposed a generous offer which provided the headmistress with the chance to expand the school elsewhere, which she did.

In 1916, Widener gifted the mansion and 114 of its surrounding acres to his niece, Eleanor Elkins Widener (1891-1966), who tore down Cooke's old home and replaced it with the 60-room Ronaele Manor. Cooke's ornate mausoleum still stands today behind St Paul's Episcopal Church, which he founded at Elkins Park in 1861.

Jay Cooke's Gamble: The Northern Pacific Railroad, the Sioux, and the Panic of 1873 By M. John Lubetkin

On the Back of a Turtle: A Narrative of the Huron-Wyandot People By Lloyd E. Divine Jr.