Completed in 1842, for Brigadier-General William Paulding Jr. (1770-1854), the retired Mayor of New York City, and his wife Maria Rhinelander (1784-1851). In 1866, William Pearson stated that Lyndhurst was “the most profoundly intelligent and provocative house to be built since... Monticello” and 150 years later, PBS named it "one of the 10 houses that changed America". Only an hour's drive from Manhattan, this Gothic Revival masterpiece – undoubtedly one of America’s finest - stands within a landscaped park of 67 acres overlooking the Hudson River at Tarrytown. Along with Carrollcliffe and the since demolished Ericstan, Lyndhurst is one of the three castles built at Tarrytown. Today, Lyndhurst is perhaps best associated with the infamous "robber baron" Jay Gould (1836-1892) who gave it its present name....
zoom_in 20 images 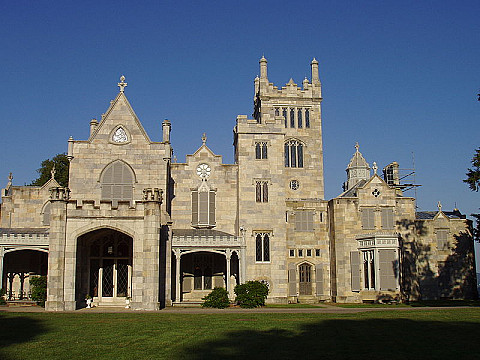 In 1838, Paulding employed Alexander Jackson Davis (1803-1892) to build his new home on what was then an estate of 184-acres, naming it "The Knoll". The impressive mansion was dressed with limestone quarried by the prisoners of Sing-Sing jail (known as "Sing-Sing marble") and its 1,300 foot frontage along the Post Road was bounded by a long stone wall. Much of Paulding's furniture bought for the house can still be seen there today.
Paulding's Folly

Paulding was no doubt inspired in the design of his home by the Gothic Sunnyside, also in Tarrytown; the home built three years previously for his famous friend and near relation, Washington Irving (1783-1859). Nonetheless, Philip Hone (1780-1851) referred to the new mansion as "Paulding’s Folly" a term which caught on due to its unusual design, fanciful turrets and asymmetrical layout at a time when most mansions being built followed the clean cut lines of the Greek-Revival style.
After Paulding’s death in 1854, Knoll passed to his youngest - and only surviving - son Philip Rhinelander Paulding (1816-1864) who lived there with his wife, Sarah Allan Mauran (1828-1864). Philip ran into financial difficulties and after leasing Knoll out for several years he eventually sold it in 1863 to Ambrose C. Kingsland (1804-1878), another former Mayor of New York. Kingsland used Knoll as an investment, selling it on at a profit the following year to finance his purchase of Hunter Island Mansion.

George T. Merritt (1807-1873) purchased Knoll in 1864, immediately bringing in the original architect, A. J. Davis, to double the size of it. The addition, completed in 1865, was known as the "north wing". It included the four-story tower, a new dining room, two further bedrooms, servants quarters, and a new entrance portico – the old one having been redesigned and incorporated into the house as a glass-walled vestibule.

Lyndhurst's interior, just as its exterior, is a stunning example of Gothic design. There are stained glass windows (including many designed by Louis Tiffany himself), incredible vaulted ceilings, and an art gallery that epitomises the Gothic style which the house captures so well. Much of the furniture still seen there was specifically designed for the house by Davis.

Merritt renamed his home "Lyndenhurst" after the rows of Linden trees with which the driveway was lined. Merritt is also credited with hiring the landscape gardener Ferdinand Mangold (1828-1905) who created here one of the most outstanding examples of American 19th century garden design - and the first park along the Hudson River. It was Merritt who built what was then the largest (19,000 square foot) conservatory/greenhouse in the country: 380-feet long, 37-feet wide and flanked by a pair 60-foot wings.

The surrounding swamps were drained and replaced by lawns with shrubs and a number of different varieties of trees planted throughout the parkland, including the evergreens that follow the angular repetition of the Gothic roofline. It was Mangold who redesigned the entrance drive, giving it the long graceful curves that reveal the magnificent ‘surprise’ views as the mansion is approached.

Merritt did not live long to enjoy his new estate, dying in 1873. The economy at that time was suffering and though his widow, Mrs Julia (Douglas) Merritt (1823-1904), had put it on the market immediately after her husband’s death, it was not until 1880 that she managed to sell it. Afterwards, Mrs Merritt built Leacote in Dutchess County.

The new owner from 1880 was the infamous "robber baron" Jay Gould (1836-1892), who shortened the name of the estate to "Lyndhurst" and used it as a country retreat and summer home; occasionally commuting by yacht to Manhattan along the Hudson. Gould was portrayed in the 1979 movie The Last Ride of the Dalton Gang and Fortune Magazine estimated his wealth at $77 million, making him the 9th richest man in America. However, the Condé Nast Portfolio also ranked Gould as the 8th worst American CEO of all time.

Gould's ruthless business reputation - including his infamous attempt to corner the nation's gold market that bankrupted LeGrand Lockwood and thousands more - was such, that even in that era, he was snubbed by New York society which explains his lack of presence in places like Newport, the Berkshires etc. However, in private Gould was a keen horticulturalist and a doting father and family man. The additions Gould made reflect this side of his character: the children's playhouse in the garden complete with child-sized furniture; a full-sized indoor swimming pool; and, in a separate building, the country's first private bowling alley. Just one year after moving in, the 19,000 square foot greenhouse/conservatory built by Merritt burned to the ground. Gould rebuilt it in 1882 with a metal frame (the first of its kind in the country) and then spent a further $40,000 to restocking it with orchids (his favorite variety) and other rare and exotic plants.

Gould increased the land holdings of the estate to 429-acres, but the family had always much admired the mansion itself and apart from a few small adjustments they kept it almost unchanged since Merritt's time. After Gould's death, Lyndhurst was left to his daughter, the philanthropic Helen Gould (1868-1938) who lived there with her husband Finlay Johnson Shepard (1867-1942) and their adopted children. She added several new outbuildings and Ferdinand Mangold (retained since Merritt) added further rustic charm to the gardens, as he also did at her summer home in the Catskills, Kirkside.

On Helen's death in 1938, she left Lyndhurst to her sister, Anna Gould (1875-1961), who  shared the home with Helen's widower, Finley Shepard, and although by this time he was almost blind, his greatest pleasure was to pass his time playing the huge pipe organ. Anna had returned to America in the year following her husband's, the Duc de Sagan's, death in Paris. She had been resident in France for the previous 44-years and moved into Lyndhurst in the Spring of 1939, where she would live out the rest of her days until 1961. By that time, the estate had been reduced from some 500-acres to 67, and on her death she gifted Lyndhurst to the National Trust for Historic Preservation:

My father loved it, as did my sister, and as I do. We loved its broad acres, its stately trees, its unsurpassed view, and particularly the atmosphere of peace, of quiet, and of contentment which prevails… the days of my childhood spent there, I count among the happiest of my long life… and as our family enjoyed this wonderful estate for so long it is now my desire, and my wish, that the residents of Tarrytown enjoy it, and its boundless possibilities… as a memorial to my father, Jay Gould.

Since 1965, Lyndhurst has been open to the public. The grounds and gardens at Lyndhurst are accessible all year round for a fee of $5. A walking trail is very soon to open that will connect Lyndhurst to Sunnyside, the previously mentioned home of Washington Irving (1783-1859). Tours of the house itself are available from Fridays to Monday for fees between $10 and $16, depending. Lyndhurst hosts a number of events particularly for children between Christmas and New Year, and more recently with the Fairytale Holiday held during the holiday season. There is also a September dog show, car shows and craft shows. Cooking awards are held here as well as lectures, concerts and school programs.

Lyndhurst was featured in America's Castles on the History Channel. Movies shot here include House of Dark Shadows (1970),The Worst Witch (1986) and Reversal of Fortune (1990) which tells the story of Claus and Sunny von Bulow of Clarendon Court.

Lyndhurst: A Guide to the House & Landscape By Amelia Peck

Hauntings of the Hudson River Valley: An Investigative Journey By Vincent T. Dacquino

Hidden Treasures of the Hudson Valley By Anthony P. Musso

Hidden History of the Lower Hudson Valley:: Stories from the Albany Post Road By Carney Rhinevault and Tatiana Rhinevault

The Wishing Thread: A Novel By Lisa Van Allen