Built in 1827, for John Kelly Spencer (1768-1831), the first Sheriff of Cobourg, and his wife Susannah Van Orman (d.1838). From 1853 to at least 1942, it was the home of the Daintry family. Today, it is a health clinic. It is the oldest surviving residence in Cobourg and many of the original external architectural features remain as they were when first constructed....
zoom_in 2 images 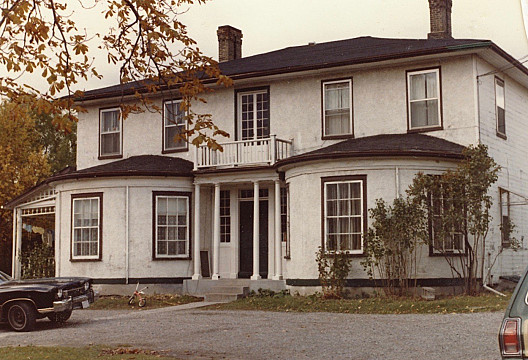 Mayor of Cobourg; Professor of Chemistry & Governor of Victoria College

John Kelly Spencer was a United Empire Loyalist from Durham in Vermont whose family had long been resident in Rhode Island. In 1815, he purchased 160-acres in what would become central Cobourg from one of Cobourg’s first settlers and fellow Loyalist, Eluid Nickerson (1760-1843). He subdivided the land into lots for development and on the north-east corner of his estate he built himself this classic Regency villa with its distinctive curved bows which was then known as "Spencer House".
Spencers, Armstrongs & Beattys

John Spencer died shortly afterwards in 1831, leaving the house to his enterprising son, George Benjamin Spencer (1821-1896), who is perhaps best remembered for donating the land on which Victoria College now stands. George married Margaret Armstrong, a daughter of The Hon. James Rogers Armstrong (1787-1873), grandson of the legendary Colonel Rogers of Rogers’ Rangers. In 1843, they left Cobourg for Winnipeg and that year George sold the estate to his wife’s brother-in-law, Dr John Beatty (1810-1898), the Professor of Chemistry and a Governor of Victoria College and later Mayor of Cobourg.

Among Dr Beatty’s children who grew up here was his daughter, Ella, whose first marital home was the vast Scarlet Oaks in Cincinnati before she purchased Earnscliffe, formerly home to Sir John A. Macdonald (1815-1891), the first Prime Minister of Canada.
Making a Fresh Start - the Daintrys at The Poplars

In 1853, Dr Beatty sold the house to George Smith Daintry (1810-1891) who gave it its name, "The Poplars". Daintry was an Englishman who'd grown up on his family’s estate in England (North Rode Manor in Cheshire), but when the family bank of Daintry & Ryle collapsed along with their silk business, George - a younger son - came to Canada in 1842 to make his own fortune. Settling at Cobourg, he became railway director and operated the first ferries on Lake Ontario between Rochester, New York, and Cobourg. He lived here at The Polars with his wife, Mary Anne Hodges (b.1809).

As fate would have it in 1869, George Daintry (the youngest of five sons) unexpectedly found himself heir to the family seat in England and returned. The Poplars was left to George Daintry’s eldest son, John Daintry (1832-1899), who was born at the family seat in England but came to Canada with his parents in the 1842. In the same year that his father returned to Cheshire, John married Sarah Louisa Beatty (1840-1921), another daughter of Dr John Beatty (1810-1898) who had sold The Poplars to John’s father in back in 1853.
Mrs Sarah Daintry outlived her husband and was remembered for “her unfaltering loyalty” to everyone, “not just those she loved”. She died while visiting her sister at Earnscliffe in Ottawa, but the funeral was held back in Cobourg. Tragically, her second daughter, Edith Muriel Frances Daintry (1874-1920) - who had married (William) Henry Fitzhugh (1867-1953) of Northumberland Hall - had taken her own life the year before. The Poplars was therefore passed to her son, J. Daintry Fitzhugh (1899-1958).
Daintry Fitzhugh was the only one of his siblings who continued to summer at Cobourg. When his father died in 1953, he inherited Northumberland Hall (and ultimately East House) and moved there leaving The Poplars to his unmarried aunt, (Clara) Louisa Daintry (1872-1942) who had previously been living with her Daintry cousins back in Cheshire, England. Louisa died at The Poplars in 1942.
Modern Life

Since 1942, ownership of The Poplars is somewhat unclear, but in 1981 it was purchased by the Cobourg Architectural Preservation Foundation to be restored to a period house museum of the 1850s. This did not survive, and today the property is a Health Clinic. The building was added to the Canadian Register of Historic Places in 2008 and is protected by the Ontario Heritage Trust.