Completed in 1870, for George K. Shoenberger (1808-1892) and his first wife, Sarah Hamilton (1815-1881). At the time it was built, Scarlet Oaks was not only the largest house in Cincinnati - easily surpassing "Oakwood" built by Henry Probasco - but one of the largest in America. Today, it is one of only two surviving houses designed by James Keys Wilson (1828-1894), first President of the Cincinnati Chapter of the American Institute of Architects. The castle is said to have created a precedent in style for some of the other better known mansions of the period, eg. the James J. Hill House and those designed by the Vanderbilt’s architect of choice, Richard Morris Hunt. Situated just north of Mount Storm, today it is the “Scarlet Oaks Retirement Community”....
zoom_in 7 images 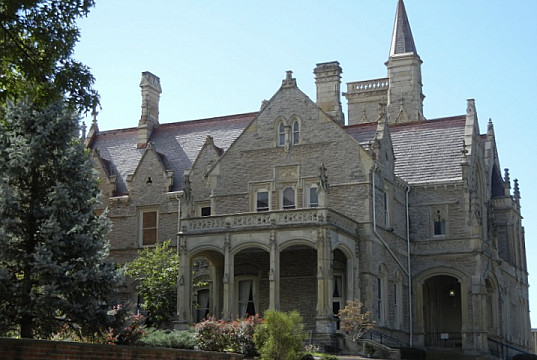 Shoenberger was one of the “Seven Barons of Clifton”. He was the eldest son of Peter Schoenberger (1782-1854) the “Iron King” of Pennsylvania and one of its wealthiest citizens. George came from Pittsburgh to Cincinnati in 1834 to open a branch for the family business, purchasing the Juanita Ironworks. Their business would profit hugely from the demand for steel during the Civil War. He was a generous philanthropist and is best remembered for raising the capital that funded Cincinnati’s industrial expansion.
Dr Warder's "Scarlet Oaks"

In 1864, Shoenberger purchased the 47-acre estate from the horticulturalist Dr John Aston Warder (1812-1883), founder of the American Forestry Association. Warder then moved full-time to the Aston Oaks English Manor which he'd purchased ten years previously from the widow of William Henry Harrison, the shortest-serving President in U.S. history. It was Warder who originally landscaped the Shoeneberger gardens and named his cottage "Scarlet Oaks" for the trees that were found there in abundance.

Shoenberger's new castle was a mix of the Gothic-Revival, Romanesque, and Jacobean styles, brought together harmoniously by its architect James Keys Wilson. It was approached by a carriage-drive from the entrance gates on Clifton Avenue and still stands on a bluff from which the view drops down some 200-feet into the Mill Valley below and beyond. To improve the view, Shoenberger developed the Spring Grove Cemetery, once again using Wilson to design the gateway, office, and the Dexter mausoleum.
The mansion is 126-feet long by 126-feet wide, giving it a footprint of 15,876-square feet. It is built of un-coursed ashlar limestone with freestone trimmings and a blue slate roof. It stands two-and-a-half stories high, but the main tower of 14-x-20-feet rises to a height of 80-feet which makes for an imposing sight when seen from the base of the hill 200-feet below. It was certainly the largest and probably the most expensive house to be put up in Cincinnati when work began in 1867, covering 36,690-square feet of living space - making it at that time among the very largest of homes not just in Ohio, but across America.

Aside from the tower and other decorative turrets, the main external feature is the 16-by-20-foot porte-cochere on the north side of the mansion. To its right is the cut stone porch (12-by-18 feet) which opens up into an elaborately carved oak-panelled hall, 20-feet across and 26-feet deep. The castle's 51-rooms included an art gallery for Shoenberger’s valuable collection, an extensive library, and a billiard's room. Typically for the period, all the principal reception rooms were richly decorated with frescoes and gilded plasterwork or were wainscoted with hard, polished woods. Craftsmen were brought in from Europe to finish the interiors and not including furnishings, it cost a staggering $750,000 to build.
The Warm-Hearted Iron King

On Sundays, Shoenberger - “the bluff and hearty” multi-millionaire - made it known that anyone was allowed to enjoy his property and take a stroll through his 47-acre estate. He was well-known to strike up conversations with those he met on such occasions and took great joy in pointing out various architectural details to those who took an interest in the house: He was particularly keen on drawing their eye to the bats that he had had carved into the oak bannisters going up the main staircase.
The Call of the North

Mrs Sarah Shoenberger, the mother of George’s nine children, died in 1881. Two years later, he married Ella Frances Beatty (1845-1924). Ella grew up at The Poplars in Cobourg, Canada, which Shoenberger and his son-in-law William Parham Chambliss (1823-1887) had developed into a fashionable summer resort for Pittsburgh’s steel magnates so that for a period it was dubbed “the Newport of the North”. George and Ella spent their winters in Cincinnati and a large part of their summers at Ravensworth, the summer home of George's daughter, Emma, and her dashing husband, Charles Fitzhugh.
George died at Scarlet Oaks in 1892 and though still the home of his widow, the house was passed to his eldest son, William Hamilton Shoenberger (1836-1898), who died unmarried just six years later. In 1897, George’s widow remarried Charles Albert Edward Harriss (1862-1929), an eccentric English musician whose “lifelong quest was to establish British musical influence in Canada”. In 1900, they moved to Earnscliffe in Ottawa, the former home of Sir John A. Macdonald, the first Prime Minister of modern-day Canada.
Becoming the Bethesda & the Scarlet Oaks Retirement Community

In 1910, Ernst Henry Huenefeld (1838-1931) paid something, “closer to $100,000 than to $125,000, the amount first named” for Scarlet Oaks as a gift to the Bethesda Methodist Church. However, the sale excluded five paintings from the art gallery which were sold separately: “The Thunderstorm” by Manuel Robbe (1872-1936) and the series of four paintings entitled “The Voyage of Life” by Thomas Cole (1801-1848), now part of the National Gallery of Art’s collection.
Huenefeld’s gift was on the condition “that eventually its spacious grounds shall provide a retreat for the aged and infirm and for incurables”. In 1915, it became known as "Bethesda Scarlet Oaks," a home for the elderly though they were accommodated in new adjoining buildings. In 1973, after restoration work, the old castle was added to the National Register for Historic Places. Today it is known as the "Scarlet Oaks Retirement Community" and houses a chapel, library, and beauty shop as well as various craft and recreation facilities. The magnificent drawing and dining rooms are mainly used for staff meetings.

Great Houses of the Queen City: 200 Years of Historic and Contemporary Architecture and Interiors in Cincinnati and Northern Kentucky By Walter Langsam & Alice Weston

Cincinnati Then and Now By Jeff Suess