Built 1902, for Carroll Hamilton Fitzhugh (1876-1966), of Pittsburgh, and his wife Mary Marshall Bell (1873-1921). On the same estate as Ravensworth, this beautiful, neo-classical mansion overlooking Lake Ontario is a true example of Colonial Revival architecture, modelled after another Fitzhugh mansion in Virginia. It remained in the Fitzhugh family until it burned down in 1976.
zoom_in 3 images 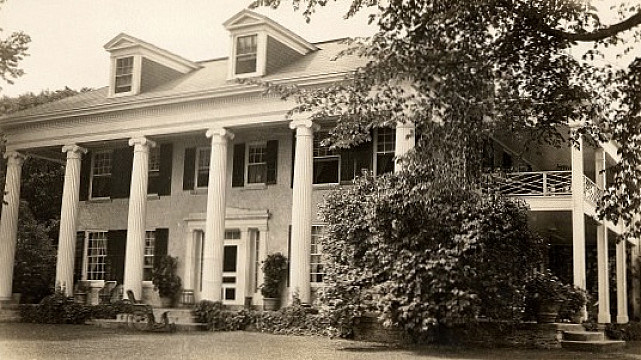 Carroll’s father, General Charles Lane Fitzhugh (1838-1923), and grandfather, George King Shoenberger (1809-1892), worked in the iron and steel business founded by Carroll’s great-grandfather Peter Shoenberger (1782-1854) the “Iron King” of Pennsylvania. The General and his father-in-law were initially attracted to Cobourg for commercial reasons. But, between them and Carroll’s uncle, William Parham Chambliss (1823-1887), they marketed it in Pennsylvania as a summer resort for the wealthy and it became known as “Newport of the North”.
Carroll and Mary’s townhouse in Pittsburgh was the first mansion put up on Ridge Avenue, built by her grandfather, Archibald M. Marshall (b.1815). They were designing a new country house for themselves in the States, but Carroll’s father was most desirous that they summer with him in Cobourg and promised to pay for the construction of a new house for them should they do so. Reluctantly, they agreed and leaving their plans with the General they set off on honeymoon.
At the same time that their house was being built, the General was putting up
Ravensworth for himself and his wife on the other side of the estate. Rather than adhere too strictly to the young couples plans, the General determined that it would be much cheaper to build both houses in a similar layout. When the materials arrived, the contractors divided them into two distinct piles, marking up one as East House simply because it lay to the east of the other - and it stuck.
When Carroll and Mary returned from honeymoon and saw their new home they were a little bit disappointed as it was not quite what they had envisioned at all. However, after a few years Carroll admitted that he had come to prefer the way his father had done it. In many ways (particularly regarding its internal layout) it was very similar to Ravensworth but it was neither quite as large nor detailed.
Ravensworth was named for the Ravensworth Plantation in Virginia, built by a distant Fitzhugh relative and where the General was billeted during the Civil War. Just as the south-facing façade of the General’s house is almost identical to that of its Virginian namesake, so the south-facing façade of East House is almost identical to that at Oak Hill, Annandale – another mansion on the Fitzhugh’s 24,000-acre Ravensworth estate – that itself bears a passing resemblance to the rear of Mount Vernon: Oak Hill was built in 1790 by the Fitzhughs for Lund Washington (1737-1796), the steward of Mount Vernon during the Revolution.
Carroll was a well-loved figure at Cobourg, referred to by one and all as “Uncle Carroll”. He had been on a world tour with his mother by the time he was seventeen and graduated from Princeton. He became a lawyer, but he was also both an amateur playwright and actor who was President of the Play & Stage Society in Pittsburgh. Fluent in French, he wrote “Mon ami Pierrot: and other Plays”. He also had a remarkable knowledge of English literature and East House was often the scene of some incredibly intellectual after dinner games!
Carroll’s adored wife, Mary, was semi-invalid and after she died prematurely in 1921, he kept the gardens at East House exactly how she had always liked them, right up until his own death in 1966. Having no children, Carroll left East House to his only nephew who still summered at Cobourg, (John) Daintry Fitzhugh (1899-1978), then of Northumberland Hall. Preferring East House to Northumberland, Daintry made his summer home there instead.
On Christmas Day, 1976, a fire broke out and East House was burnt to the ground. Also lost in the fire were family portraits, silver, china and furniture worth a reported $2 million. In 1980, a well-attended auction was held in Cobourg for the contents of various outbuildings which was attended by Daintry’s widow, Hazel “Suzie” Fitzhugh (d.2011)of Captiva Island, Florida.