Built from 1748 (as shown on the date stone) for Frederick Van Cortlandt (1699-1749), at Yonkers near the mouth of the Croton River. It is not to be confused with Van Cortlandt Manor further north in Westchester. The L-shaped Georgian house with hipped roof stands two-and-a-half stories high and is constructed of native fieldstone. As New York’s first historic house museum it contains an outstanding collection of furniture and decorative arts, including many heirlooms donated back to the house by members of the Van Cortlandt family. Over the windows, by way of keystones and corbals, were inserted carved faces – some mischievous, and some fiendish. It is the oldest building in the Bronx and became a National Historic Landmark in 1976....
zoom_in 4 images 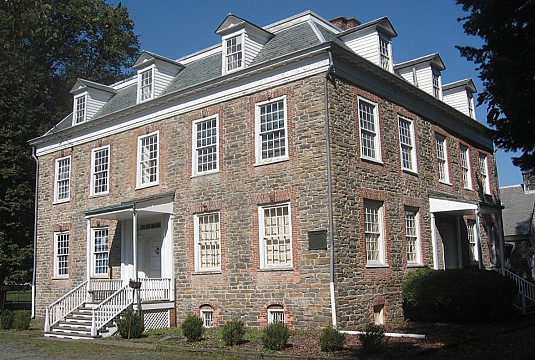 The Van Cortlandts were one of New York’s most prominent mercantile families. Frederick was the son of Jacobus Van Cortlandt (1658-1739) whose brother, Stephanus, was the first American-born Mayor of New York. The brothers obtained a license to purchase land from the Native Indians and Stephanus became the 1st Lord of the Manor of Cortlandt. The land on which Frederick built his mansion contained an extensive grain and wheat farm with a grist mill. Frederick died just one year after the house was built and it passed to his son, Colonel James Van Cortlandt (1727-1787). During his time, the house was known as "Lower Cortlandts" to distinguish it from his cousin's at Moshalu.

During the Revolutionary War, the house was occupied by Marshal Jean-Baptiste Donatien de Vimeur (1725-1807), Comte de Rochambeau and Gilbert du Motier (1757-1834), Marquis de Lafayette. Owing to its strategic location between Broadway and the Albany Post Road, the house was occupied by both American and British forces. George Washington is known to have twice stayed during the War, as did the British General, Sir William Howe.

James died childless and he left the property to his brother, Augustus Van Cortlandt (1728-1823), who died without male issue in 1823. Augustus was the last of their branch of the family to bear the Van Cortlandt name and therefore he left the property to his grandson, Augustus White, on the proviso that he changed his name to "Van Cortlandt". Augustus lived at the house with his brother, Henry, who was also unmarried. He died in 1839 and left the house to Henry who changed his name to Van Cortlandt but died only six months later in the same year. The property was now left to their nephew Augustus Bibby (1826-1912), who was also required to change his name.

In 1889, months before the death of Mrs Bibby Van Cortlandt, the family sold the house and estate to the City of New York. Seven years later (1896), the National Society of Colonial Dames in the State of New York restored the house and opened it the following year (1897) as a museum depicting life in the eighteenth century. It was the first historic home in the city to be used as a museum, and just the fourth in the country. More recently, the house was used in the drama series "Boardwalk Empire" that won twelve Emmy Awards and the Golden Globe Award. The 1,000-acre estate became parkland, today known as Van Cortlandt Park, containing many natural wonders as well as the Van Cortlandt Golf Club - the oldest golf club in the country, opened in 1895.

The Bronx (Then and Now) By Kathleen A. McAuley & Gary Hermalyn

We Used to Own the Bronx: Memoirs of a Former Debutante By Eve Pell