Completed in 1912, for Baron Henri de Rothschild (1872-1947) and his wife Mathilde de Weisweiller (1874-1926). Originally known as the 'Ferme du Coteau,' from 1924 it became known as the Villa Strassburger when it was purchased by an American couple, Ralph Strassburger and his wife, the heiress May Bourne. In 1948, they redecorated the house after it was badly damaged by the Germans during World War II and it is still seen in that style today. Their son donated the house and all its contents to the Town of Deauville in 1980 and it is open for tours during the summer months....
zoom_in 7 images 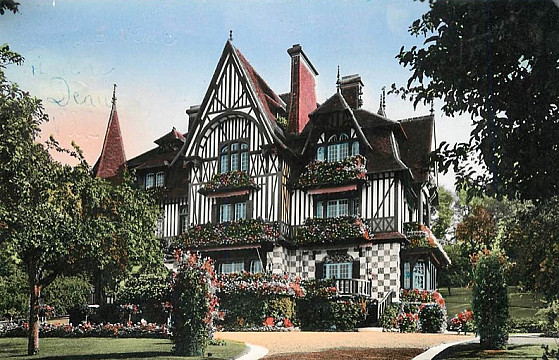 Henri de Rothschild was a grandson of the founder of the now famous Chateau Mouton-Rothschild wine estate in Bordeaux. Henri's house at Deauville took five years to build and was designed by a local architect, Georges Pichereau, in the style known as Neo-Norman. He had purchased the farm on which it was built in 1875 from the great French novelist Gustave Flaubert whose family had owned much of the surrounding land since 1837.

By 1924, Mrs Rothschild had tired of the villa as the sea view was not to her preference and that year they sold up to the Americans Ralph B. Strassburger (1883-1959) and his wife, the Singer heiress, May Bourne (1881-1975). The Strassburgers had fallen in love with Normandy and Deauville in particular after honeymooning here in 1911. They were also attracted to Deauville for the racing, being passionate thoroughbred racehorse owners and breeders, keeping stables at another nearby property, Haras des Monceaux.

The (Strassburger) villa has views of the Deauville Racecourse, the famed track where thoroughbreds ran for Les Grandes Prix. In the distance and to the west, is the town and the beach set against a backdrop of the Atlantic Ocean. (It enjoys) Fabulous sunsets over the water end each day...

The Strassburgers then lived predominantly in America at Normandy Farm in Pennsylvania. They also co-owned Singer Castle and only used the house in Deauville for one month every year (August), for the horse-racing season. However, it was always maintained throughout the year by a staff of thirty (including eight gardeners and six cooks) just on the off-chance that they might call in unexpectedly. That did not happen!

During World War II, the house was requisitioned by the Germans. The commandant who took it over as his headquarters was a sizeable man and unable to fit into their sleek, claw-foot bath, he replaced it with an extra wide tub to accommodate his ample girth!

After the war, the house was left badly damaged which prompted the Strassburgers to redecorate as it is seen today. Ralph became fully immersed in the project and never returned to the States, dying at their home in Paris, 3 Avenue de Tourville, in 1957. May continued to come here until her death in 1975. In 1980, their son Peter donated the house and all its contents (the Strassburgers were "avid" collectors of antiques) to the Town and today it is open for tours in July and August. In 2011, President Sargozy used the villa for the G8 Summit, giving the world leaders and their wives a tour around the property.

Singer and the Sewing Machine: A Capitalist Romance By Ruth Brandon