Completed in 1905, for Frederick Gilbert Bourne (1851-1919) and his wife, Emma Sparks Keeler (1855-1916). Situated on its own island ("Dark Island") and inspired by a fictional Scottish Castle in one of Sir Walter Scott's novels, the venerable century-old castle - built at the same time as nearby Boldt Castle - is today a well-known landmark and popular tourist attraction. Located near Chippewa Bay among the Thousand Islands in the St. Lawrence Seaway, visitors and guests alike can enjoy an American sunrise and a Canadian sunset. Michael Jackson's offer to buy the castle was turned down in the 1980s and today it is back on the market, for $24.5 million....
zoom_in 15 images 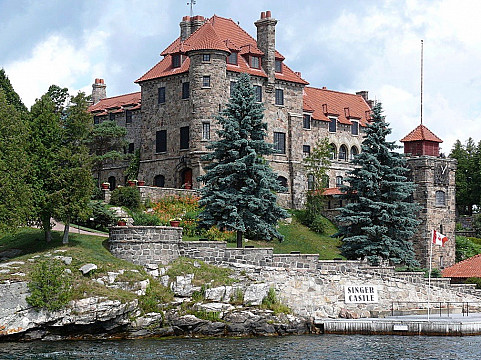 Frederick G. Bourne was the dynamic President of the Singer Manufacturing Company who oversaw its rise to become, "perhaps the first modern multinational industrial enterprise of any nationality". Out of the office, he developed passions for German automobiles and more particularly yachts, serving as the Commodore of the New York Yacht Club and sponsoring entrants to the America's Cup Race. Prior to the construction of Dark Island, he is also remembered for his immense 110-room mansion on the South Shore of Long Island, Indian Neck Hall. When he died, he left an estate of $42 million.
Dark Island

In the late 1890s, Bourne became a member of the Thousand Islands Yacht Club. In 1902, he bought the wooded 7-acre "Dark Island" - previously known as both the Bluff and Lone Star - for $5,000 from Dr William Henry Harison (1853-1931), the golf pioneer and first President of the Augusta Country Club; his wife, Mary Frances Campbell (1864-1936); and, his brother, Noble Wymberly Harison. That same year, Bourne commissioned Ernest Flagg (1857-1947) to build him a hunting lodge on his newly acquired island.

Flagg was the graduate of the École des Beaux-Arts in Paris who had developed a close friendship with Bourne after building his country home on Long Island, Indian Neck Hall. Flagg was in the habit of having his wife read stories to him at 7 o'clock every evening and it just so happened that when Bourne asked him to design his hunting lodge, Flagg was being read Woodstock (1826) by Sir Walter Scott. It was Scott's description of the Woodstock Palace in Oxfordshire - a mysterious English castle with many secret passageways - that inspired Flagg's design for Bourne's castle on Dark Island.

The original Woodstock was destroyed during the English Civil War (1642-1651) and a few decades later Blenheim Palace was built near to where it stood: Blenheim is of course where Consuelo Vanderbilt (1877-1964) - the daughter of Bourne's neighbour at Long Island - endured a miserable marriage to the 9th Duke of Marlborough.

Bourne's 28-room castle stands over five stories and took two years (1903-1905) to build at a cost of just under $500,000. 116-men were employed year round to complete the castle and the rose granite with which both it and Boldt Castle were constructed was quarried locally from nearby Oak Island. Flagg spared no detail, and just like Woodstock there were spiral stairways, dungeons, secret passageways, subterranean labyrinths, turrets and towers. On a more practical level, the red roof tiles were imported from Spain and the guttering was made of copper. Bourne was delighted with the result, naming his new summer home and fall hunting lodge, "The Towers".

On the American side of the border, the island and its castle only come into sight as boats come around Cedar Island. Docking at the stone boathouse at the foot of the castle, flagged steps lead up to the huge wooden door which brings the visitor into the Great Hall, measuring 39-by-33 feet. This vaulted room with ceilings elaborately carved by Italian masons is lined with sturdy stone pillars and archways. There is a large stone fireplace and of the two doors opposite the entrance one leads down to the wine cellar and another up to the kitchen and servants quarters. Even down to the suits of armour, Flagg used this paragraph from Scott's Woodstock to bring the Great Hall of that 12th century English castle - that also started life as a hunting lodge - to life:

The Way, therefore, lay open to the great hall or outer vestibule of the lodge. One end was entirely occupied by a gallery, which had in ancient times served to accommodate the musicians and minstrels. There was a clumsy staircase and in each angle of the ascent was placed, by way of sentinel, the figure of a Norman foot-soldier. Their arms were buff-jackets or shirts of mail, round bucklers, with spikes in the center, and buskins which adorned and defended the feet and ankles. These wooden warders held great swords, or maces, in their hands, like military guards on duty.

The library (32-by-18 feet) that was originally intended to be the billiards room is accessed through an archway off the Great Hall and the walls that are not covered in walnut bookshelves are panelled in walnut. It is here that the first of many secret passageways is encountered: Next to the marble fireplace, a panel opens that leads to the labyrinth of passages behind the walls within the castle. They were not just for fun, but served a useful purpose in allowing the servants to move from room to room without getting in the way of the guests!

The kitchen, with views across to the Canadian shoreline, is within the service wing of the castle that includes servants bedrooms and a dining room; a utility room, a pantry, a dumb-waiter and a spiral staircase that leads up to the main dining room. Next to it is the breakfast room of stone and walnut, but kept bright with the large gothic windows lining three of its four sides and offering spectacular views over the great St. Lawrence Seaway dotted with its many islands. From this room, another spiral staircase leads up to the clock tower with its six foot clock face and then down to the boathouse with walls 30 inches thick. There is also an ice house and a bath house on the property and many of the outbuildings can be reached via underground tunnels from the castle.

The Bournes as a family were obsessed with boats and yachting. They also owned two thirds of nearby Ice Island that they used for duck and pheasant shooting, frequently inviting as many as 15-guests to the castle for hunting weekends on privately chartered trains from New York. Fishing also played a major part in their recreation time and with the depth of the water varying from very deep to very shallow, it was a haven for sport fishing and noted for its abundance of Largemouth Bass and Northern Pike.

In the castle, there was a Trophy Room - circumnavigated by more secret passageways - and many of those collected by various members of the Bourne family over the years can be seen at the Antique Boat Museum in Clayton. The oval portrait of King Charles II (1630-1685) of England over the marble fireplace in the Trophy Room can be swung open from the secret passageway behind it.

Bourne survived his wife and died at Indian Neck Hall on Long Island in 1919. He left an estate of $42 million to be divided equally between his seven surviving children, but their squabbling prompted a newspaper to quip that they seemed happier to share their inheritance with their lawyers rather than between themselves!

In the summer of 1919, two of Bourne's daughters - Marjorie Bourne and Mrs May Strassburger - bought out their siblings for $389,000 to become the new owners of Dark Island. In 1921, May and her husband Ralph Beaver Strassburger (1883-1959), of Normandy Farm, gave Marjorie lifetime use of the island. Five years later, Marjorie married an old friend well-known to the family, Alexander Dallas Thayer (1888-1968), and together they would happily spend the next 36 summers at Dark Island.

No doubt adding to the romantic allure of Dark Island, the Thayers allowed it to be used for rum-running from Canada during the Prohibition (1920-1933). They made several additions to the castle: adding the breakfast room and a third story apartment over the piazza that gave them a separate living space away from the guest rooms.

Alec was a noted tennis player who appeared in several matches at the U.S. Open in the 1920s and therefore it was perhaps of no surprise that they built a tennis court on the edge of the island, surrounded by water on three sides. Also, for Alec's birthday in 1928, Marjorie had a squash court built on the north side of the island. Aside from 3-yachts that they kept elsewhere, at any one time the Thayers kept 5-motorboats, 3-rowing skiffs and 2-canoes in the island's boathouse.

Shortly before her death, Marjorie deeded Dark Island for the nominal sum of $1 to the La Salle Military Academy that had occupied her childhood home, Indian Neck Hall since 1925. The Thayers continued to summer there until her death in 1962 and though Alec outlived her for a further six years, he never returned.

Except for the summer and the early fall, the island was engulfed by ice for the rest of the year. Unable to find a use for it, in 1965 the administrators of La Salle sold Dark Island for $35,000 to the Harold Martin Evangelistic Association, established by Dr Harold George Martin (d.1999), former chaplain to the Royal Canadian Air Force.

Martin had grown up in Quebec but his grandfather was Norwegian and their original family name was Martin-Jorstadt. As such, he and his wife renamed the Bourne-Thayer home "Jorstadt Castle" and used it primarily as a private retreat for ministers and missionaries. They converted the breakfast room into a chapel and every Sunday during the summer months services were held there for members of the public.

By 1985, health reasons meant the Martins were no longer able to visit Dark Island and they put it on the market for $5 million. Though members of the Evangelistic Association continued to use Jorstadt, the island remained on the market until 2002. During that time they refused an offer for the island from Michael Jackson (1958-2009), but they did allow it to be used in the filming of The Skulls (2000).

In 2002, Dark Island was purchased for $1.8 million by a group of investors who carried out a major and well-needed restoration project before opening it as a tourist attraction under the name "Singer Castle". It attracts 35,000 visitors a season and aside from private tours, it has become a popular wedding venue. The Royal Suite that occupies one wing of the castle is available to hire for overnight stays. Though still operational, since 2008 it has been on the market with Sothebys International Realty for $24.5 million.

The Thousand Islands By The Antique Boat Museum