Built from 1834, for John Heist (1782-1854) and Catherine Levering (1789-1872). Located in the Gwynedd Valley in the heart of the Whitpain Township, the farm has a long and rich association with thoroughbred racehorses, reflected by the statue of its famous sire, "Fair Play". Having been owned by a newspaper owner who was in the running for Governor of Pennsylvania, a celebrated Professor of Botany, and the heiress to the Singer Sewing Machine Company, since 2003 Normandy Farm has been open to the public as a hotel, restaurant and state-of-the-art conference center....
zoom_in 2 images 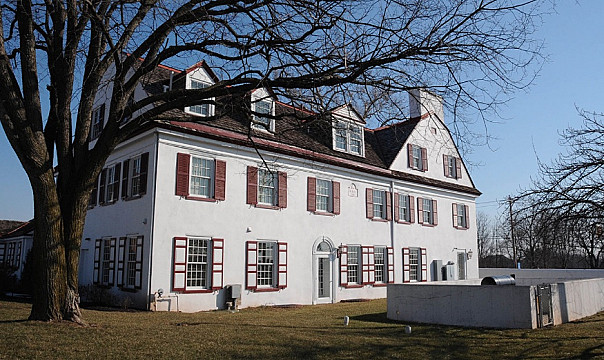 The large residence built by the Heists was named Franklin House or Franklinville and they operated it as a tavern on the newly constructed road between Norristown and Doylestown. It was built on a farm that had been passed down to Mrs Heist from her great-grandfather's brother, Jacob Levering (1706-1793), who acquired the 68-acres on which it stood in 1730. One year after the death of their mother, the Heist children sold the house and its then 82-acres for $13,000 to William Miskey Singerly (1832-1898).

Singerly was a true entrepreneur and generous benefactor. He had inherited shares in a railway company from his father which he sold for $1.5 million. But, he didn't back on his laurels, he expanded his fortune through his purchase of The Philadelphia Record, operating mills, and property development - expanding the city limits of Philadelphia. He still found time to own a theater and established the Chestnut Street National Bank and the Chestnut Street Saving Funds Company, both of which he was elected President.

Singerley's chief passion was farming, particularly raising livestock. In 1877, as homage to his first major purchase, he renamed Franklinville, "The Record Farm". In his obituary that appeared in The New York Times it was reported that Singerly was,

A successful stock raiser... His work in the encouragement of raising fine stock will never be forgotten by Pennsylvanians. In 1873, he bought a tract that he called The Record Farm, now famous among all stock raisers. This farm expanded under his personal management until it comprised more than 600 acres. It is valued at over $250,000. He spared neither pains nor expense, and The Record Farm is accounted one of the best stock farms in the entire country. The buildings are numerous, capacious, and built with a view to make them best serve the purposes of their construction. Everything is conducted on economic and scientific principles.

Singerly was a close friend of U.S. President Grover Cleveland who was among the several distinguished people to stay here. It was Singerly who built the huge barn (200-feet long and 50-feet wide) that is still prominent on the property today and he expanded the farm to 825-acres while making significant improvements to the manor house. But, despite all his commercial ventures that put him in the running for Governor of Pennsylvania, when he died he left heavy debts through the failure of his banking endeavors.

From 1898, The Record Farm was broken up and sold off in parcels, mostly to local farmers. In 1901, the original 82-acre tract that contained the manor and barn was purchased by the distinguished Dr William Powell Wilson, Professor of Botany at the University of Pennsylvania, the brainchild and founder of the Commercial Museum of Philadelphia, and one of the first Presidents of the Botanical Society of America.

In 1913, the farm was acquired by Ralph Strassburger (1883-1959) and his wife, May Bourne (1881-1975), the daughter of the President of Singer Manufacturing Company who grew up in the lap of luxury between Indian Neck Hall and Singer Castle. They purchased the farm using part of the $4 million wedding gift given to the couple by May's father. They renamed their new home "Normandy Farm" after Normandy in France, where they spent their honeymoon. Like Singerly, Strassburger was a wealthy businessman, an outspoken member of the Republican party and a newspaper man.

At Normandy Farm, the Strassburgers raised and bred both thoroughbred racehorses and hunters. They also kept a herd of 300-Ayrshire cattle and maintained a state-of-the-art farming facility. They carried out extensive renovations to the old house, increased the landholdings to 1,500-acres and put up the front gates, the white stucco-covered walls and several new outbuildings including the distinctive three silos - all still seen today.

In 1924, they furthered their equestrian operations by purchasing Villa Strassburger at Deauville in France from Baron Henri Rothschild (1872-1947), before acquiring another horse farm nearby, Haras des Monceaux. Their horses achieved considerable success in America, England and notably at the Deauville-La Touques Racecourse.

By 1946, Strassburger had lost his influence within the Republican Party and leaving Normandy Farm in the hands of a caretaker, Arthur Rush, he and May left America for France. The following year, he was indicted for income tax evasion but the case was never brought to trial. He continued to run his newspaper from France and died at Paris in 1959. His wife and their only son, Peter, then returned to America and Normandy Farm where they continued to raise and race horses, and run the newspaper.

Peter continued to live here after his mother's death but gradually broke up the estate, selling off parcels of land until his death in 1993. He left the property to two distant cousins who sold it to the Vesterra Corporation who carved up and sold of the remnants. In 2000, the house, barn, and several other historic buildings on a plot of 262-acres were acquired by Hansen Properties. The house and outbuildings have since been restored and added to the National Register of Historic Places. Since 2003, Normandy Farm has been open to the public and is run as a hotel, restaurant and state-of-the-art conference center.

The Pennsylvania Barn: Its Origin, Evolution, and Distribution in North America By Robert F. Ensminger

The Greatest Gambling Story Ever Told: A True Tale of Three Gamblers, The Kentucky Derby, and the Mexican Cartel By Mark Paul