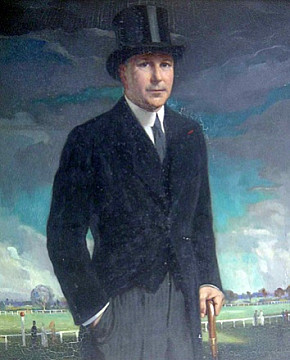 He was born at Norristown, Pennsylvania, and educated at Phillips Exeter Academy and the U.S. Naval Academy. He joined the diplomatic service and President Taft appointed him Consul-General and Secretary to the Embassies of Romania, Bulgaria and Serbia. Later, he was appointed Second Secretary of the Embassy at Tokyo, Japan. After completing voluntary service in World War I with U.S. Naval Intelligence, he purchased and published the Norristown Times and the Norristown Herald. In 1923, he united the two to create the Norristown Times-Herald. In 1911, he married May Bourne, one of the Singer heiresses. They were married in England at West Wickham in Kent and afterwards took a Mercedes-Benz and drove around Normandy for their honeymoon, which sparked a lifelong passion for the area. They named their new home in Pennsylvania Normandy Farm and purchased two properties in the Deauville area, including Villa Strassburger. They well-known for thoroughbred racing and breeding, with many of their horses achieving worldwide success. They also kept a townhouse in Paris at 3 Avenue de Tourville (where Ralph died in 1957), a racing stables at Haras de Monceaux, and they co-owned the iconic Singer Castle.