Completed in 1898, for Daniel B. Wesson (1825-1906) and his wife Cynthia Maria Hawes (1825-1906). Built for one half of the Smith & Wesson gun-making duo, this elegant French Renaissance/Scots Baronial chateau was designed by one of the leaders of the chateauesque style, Bruce Price (1845-1903). In 1905, it made the headlines in the Boston Post when the notorious "Black Hand Gang" threatened to blow it up with the old arms-manufacturer and his wife inside unless they were paid off. It survived, and from 1915 was the home of the Colony Club until it burned down in 1966....
zoom_in 16 images 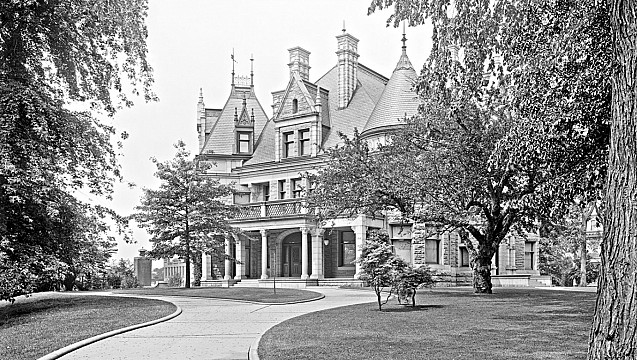 Daniel B. Wesson, of Springfield, Massachusetts; Co-Founder of Smith & Wesson

Daniel B. Wesson was a gunsmith who learned the trade from his brother, Edwin, before going into business with Horace Smith in 1854. Two years later, Smith & Wesson patented the world's first fully self-contained cartridge revolver. By the conclusion of the Civil War in 1865, Wesson's annual income was $160,000. When Smith retired in 1873, Wesson bought his share of the company and became the sole owner of Smith & Wesson. In 1899, he patented their most famous revolver, the .38 that has been in continual production ever since and is used by virtually every police agency and military force around the world.

In 1889, Wesson paid $35,000 for a parcel of land near to his factory at what would become 50 Maple Street. He purchased it from another well-known Springfield entrepreneur, George W. Tapley (1835-1912), President of the Milton Bradley Company.

Bruce Price (1845-1903) was an American architect who had developed a reputation for the chateauesque style primarily through building hotels for the Canadian Pacific Railway. The mansion he built for Wesson was in many ways an enlarged, more elaborate version of the James Ross House in Montreal, blending the French Renaissance (conical towers, pitched roofs, finials etc.) with the Scots Baronial through the use of rough-cut stone.

Construction began in 1893 and that same year Price's design was published in the American Architect & Building News. Wesson was 68-years old when work started and though this was to be the tenth mansion (not to mention hospitals etc.) he'd built in the area, it was also very much intended to be the most extravagant and his principal residence. Costing some $400,000, it stood three-and-a-half stories high and was faced in pink Milford granite under a red slate roof with bronze cresting and finials.

The interior was comprised of twenty principal rooms, each with its own marble fireplace. The reception rooms were either panelled in oak or mahogany or lined with rich satin. The bannisters of the grand staircase were elaborately hand-carved, as were many of the finer architectural details. Unsurprisingly for a forward-thinking inventor building the home in which he would retire, the house was fitted with the latest in modern comforts: gas and electric lighting; hot and cold running water; and, even a hydraulic elevator. After five years of construction (when most projects of this kind took two or three), the mansion was complete and valued at $1 million - a fifth of Wesson's overall wealth.

Daniel Wesson was one of the wealthiest men in Massachusetts and his vast, rambling house was certainly not inconspicuous. In 1905, he was an 80-year old man which is when he came onto the radar of Boston's notorious "Black Hand Gang". That year, the Wessons began to receive letters marked with daggers and skulls & cross bones threatening to blow up their mansion with dynamite (and them with it) unless a ransom was paid.

The story made the headlines of the Boston Post for whom the gruff, old arms-manufacturer growled: "I will never pay one cent to extortionists of any stripe"! However, the gang was well-known and the threat was not taken lightly: Police officers - no doubt armed with the very best that Smith & Wesson could provide - were strategically ringed around the new chateau that now took on the role of an old fortress.

The Police colluded with Mr Wesson to agree to meet and pay his extortionists. Except, rather than Wesson going himself, Patrolman Simon Connery volunteered to go in his place, dressed up complete with beard and cane. At the appointed hour, Connery stepped out of Wesson's carriage at the agreed place. But, either the gang cottoned on to the ruse or they lost their nerve - either way, Wesson kept his money, and his mansion.

Even if the Black Hand gang had wished to carry out their threat, their intended victims died of natural causes the following year - within just a couple of weeks of one another. Their three surviving children all had their own well-appointed houses and so the still very new mansion was offered to the Connecticut Valley Historical Society on the condition that they raised a fund of $100,000 for its upkeep. Despite generous donations, including $10,000 from J.P. Morgan, they were unable to meet the endowment.

Fire, and the Site Today

A fire on February 20, 1966, tore through the old mansion and the sub-zero conditions hindered the firemen's best efforts. It was burned beyond hope of restoration and subsequently the ruins were demolished. A nondescript office building was put up in its place that now houses the Baystate Visiting Nurse Association & Hospice. Wesson would have been horrified by the architecture, but happy with its use. 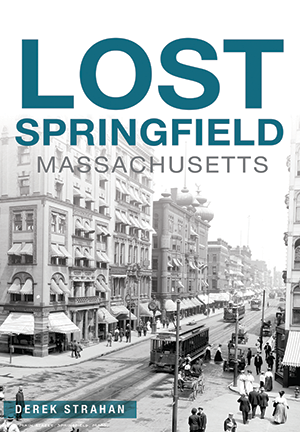 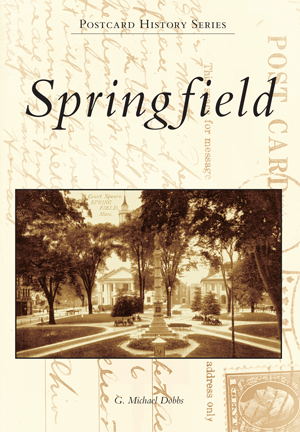