Bruce Price, Fellow of the American Institute of Architects 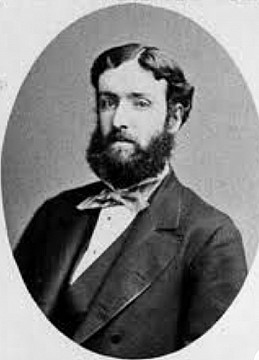 He was born in Cumberland, Maryland, and grew up in Baltimore. His maternal grandfather, Upton Scott Bruce, was President of the Bank of Allegany, State Senator for Maryland and a first cousin of the father of Francis Scott Key, author of "The Star-Spangled Banner". He trained as an architect in Baltimore and took a brief trip to Europe before opening offices in Wilkes-Barre. He came to New York City in 1877 and was employed by Pierre Lorillard IV to design several residences at Tuxedo. He became most famously associated with the shingle and chateauesque styles. His largest domestic commission was Georgian Court for George Jay Gould and in 1898 he worked with Daniel Chester French for the Richard Morris Hunt Memorial in Central Park.

He patented his design for the parlor bay-window cars that were used on the Pennsylvania Railroad and the Boston & Albany Railroad. This brought him to the attention of the executives at the Canadian Pacific Railway who chose him to build their flagship hotels across Canada. The iconic Château Frontenac at Quebec City (said to be the most photographed hotel in the world) is the building with which he is most famously identified and was finished in 1893. From 1900, he went into partnership with the French architect Jules-Henri de Sibour and the firm continued for five years after Price's premature death in 1903. He was a Fellow of the American Institute of Architects (1890) and belonged to the Architectural League of New York. In 1871, he married Josephine, daughter of Washington Lee, a coal merchant of a Wilkes-Barre. They had two children but their son died in infancy. Their daughter, Emily Post, was an authority on etiquette.