Completed in 1856, for John James Herrick (1816-1887). Perched in the Tarrytown Hills just north of Carrollcliff Castle, Ericstan was the first castellated Gothic mansion to be built in the Hudson River Valley. It was designed in 1855 by Alexander Jackson Davis (1803-1892) who is perhaps best known for his other nearby Gothic masterpiece, Lyndhurst. However, Ericstan was described both as Davis' "most successful castellated villa" and as his "most pretentious effort in the Gothic mode"....
zoom_in 10 images 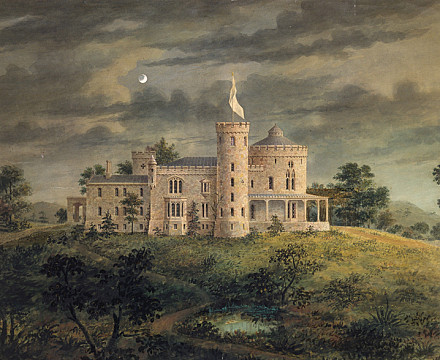 Herrick made his fortune as a dry goods merchant and shipowner, and unsuccessfully ran for Mayor of New York. Aside from Alexander Davis, others who brought his home to fruition were: B.I. Schoonmaker (the carpenter); A.H. Briggs (mason); and, C. Lamoureux (farmer) who presumably played a part in laying out the grounds. The heart of his 30-room granite castle was the three-story circular tower (reminiscent of the 12th century Round Tower at Windsor Castle) that faced west and the setting sun over the Hudson.

Herrick was delighted with his castle: "A.J. Davis (wrote) in 1864 that the house couldn't be built today for less than $100,000. No fever. No mosquitos, in fact it is not only the most healthy, but the best and most commanding building on the Hudson and the most beautiful and will stand through all time". Sadly, he was wrong on the last part.
Inside the main tower on the ground floor was the circular drawing room with its "intricately vaulted ceiling springing from a massive central cluster of delicate Gothic columns," modelled after an English Chapterhouse (Cathedral room). The dining room table comfortably sat eighteen guests.

Unfortunately, Herrick suffered significant financial losses and in 1865 he was forced to sell his castle and its furnishings (specifically made for Ericstan) to the inventor Edward Maynard (1813-1891) who'd made his fortune when he designed the breech-loading rifle.

In 1880, Maynard sold it to Alfrederic Smith Hatch (1829-1904), President of the New York Stock Exchange. Smith died at the castle in 1888, but it would seem that his descendants continued to live there, when the history of the castle becomes opaque.

Ericstan was eventually purchased by Miss C.E. Mason in 1895 and became "Miss Mason's School" - a private school for girls. The school closed in 1933 and when the castle went into receivership a buyer could not be found. Having stood empty for 11 years, Ericstan was demolished in 1944 for development. It would have stood on what is today Castle Heights and the estate would have been entered via Rosehill and Union Avenues.