Completed in 1854, for the unmarried William P. Chapman (b.1811), a longtime friend of the castle's celebrated architect Alexander Jackson Davis. Chapman was a native of Connecticut who'd enjoyed a comfortable upbringing as the son of a Judge but made a fortune in New York with his twin brother, Henry. The brothers didn't only share a successful brokerage firm, they also shared the same house in Brooklyn and they continued this same living arrangement when they moved to Rye. Although the castle was commissioned by William, it was also home to his brother, sister-in-law (a native of Rye) and their children. Whitby remained a private home until 1921 and is best recognized today as the clubhouse of the Rye Golf Club and a popular wedding and events venue....
zoom_in 11 images 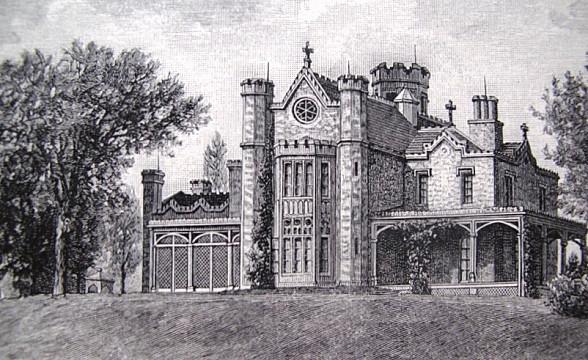 Towards the end of the 1840s, Frederick William Chapman (1806-1876) was nearing the completion of his 400-page magnus opus: a history of the Chapman family who he traced back to the 14th century when they were "settled at, or near Whitby" in Yorkshire in the north of England. When the book was published in 1854, among those he thanked in the preface, "for the general interest they have manifested," was William P. Chapman.

In the 1850s, Gothic-Revival architecture and interest in days of yore was rapidly gaining popularity across the English-speaking world. That Chapman chose to build a castle and chose to name it "Whitby" was undoubtedly a direct result of his newly discovered roots. It is often claimed that the stone used to build it was taken from England's ancient ruin, Whitby Abbey, but in fact it was built with gray stone quarried at Greenwich, Connecticut. However, Chapman may well have paid homage to his roots by visiting Whitby - where his distant kinsman, the learned Thomas Chapman (1798-1885), Fellow of the Royal Society and High Sheriff of the county was still seated - and while there he may well have acquired a stone from the abbey to lay in the foundation of the family's newest seat.

The Chapmans at Whitby

In the summer of 1848, William's brother, Henry, married Rebeccah Hurlburt of Rye, daughter of one of the town's most highly respected agricultural businessmen. It was almost certainly because of her that the brothers chose to build here. William purchased 40-acres just north of the Parsons estate (Lounsbury) and work began on their new home in 1852. Its architect, Alexander Jackson Davis, was then the most famous proponent of the Gothic-Revival style in the country and is perhaps best remembered for Lyndhurst.

Whitby is sited overlooking Long Island Sound and on completion William filled it with an impressive collection of paintings by the Old Masters, modern prints, and photographs. Notable among its architectural features is the rose marble flooring; Davis' depictions of George Washington in the ceiling above the entrance hall; and, the chapel built on the upper floor which is identifiable from the outside by its stained glass window. The Chapman brothers lived here with Henry's wife and his two children, William and Hurlburt. However, by 1886 their once substantial fortune was lost and Henry's sons were forced to sell up to Joseph Park (1823-1903), co-founder of the grocers Park & Tilford.

From Castles to Kennels

The Chapmans may have lost Whitby, but its name gained some notoriety in the last decade of the 19th century: In 1891, Hurlburt was described as, "a once prominent lawyer". Although down on his luck, he was not without ideas and that same year he and his brother, William (helped by a female cousin) leased a home on Flatbush Avenue in Brooklyn where they established the "Whitby Kennels". This was a home for pampered pets of all descriptions who were brought here to repose while their wealthy owners travelled the world. The kennels quickly became something of a tourist attraction, and some of its more prominent clientele included James Gordon Bennett's performing poodles and Chapman's own prize-winning Angora cats who lived in cages on the front porch!

From 1886, Whitby became the country residence of Rye native Joseph Park, the then retired President of Park & Tilford. The firm he co-founded in 1840 was one of New York's most prominent upmarket wholesale grocers that later became known as distillers and importers of wines and liquors. Joseph Park died in 1903 leaving two sons. Whitby was first occupied by the elder of the two, George C. Park, but after he died in 1916 of complications following a fall, Whitby and what was now the Park's 4,000-acre estate in Rye and Harrison was conveyed to George's younger brother, Hobart J. Park.

By the time of Hobart's death in 1948, he had made over $4 million by selling off a large portion of the real estate he had inherited in Rye and Harrison - including the land on which the Westchester Country Club stands. In 1921, he sold Whitby and its original 40-acres to the City of Rye which was then combined with what had been the Allen's 110-acre estate to create the Rye Country Club. Its name changed over the years to the Rye Woods Club and the Glen Castle Country Club before becoming the Rye Golf Club from 1965.

Having fallen into a bad state of repair it was rescued in 1995 when "Whitby Castle" (as the clubhouse is known) was immaculately restored by Peter Gisolfi Associates. Non-original additions were taken down and replaced by a large new wing that blends in with Davis' original Gothic design. It remains as the clubhouse today, and is a popular venue.

Picturing Our Past: National Register Sites in Westchester County By Gray Williams