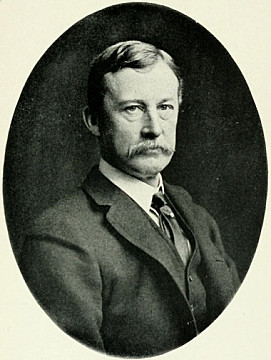 He was born at Jersey City and graduated from Yale University's Sheffield Scientific School. As an engineer, he apprenticed with distant cousins who'd established the Rogers Locomotive Works in Paterson, New Jersey. He then joined the Delaware, Lackawanna & Western Railroad Company; and, the Milwaukee, Lake Shore & Western Railway Company of Wisconsin. During the course of his career, he built several railroads. In 1880, at New York City, he married Anne Caroline Coleman of Cornwall, Pennsylvania & 340 Madison Avenue, New York. They initially went with his work to Milwaukee but by 1882 were living at Drayton House in Hyde Park near the Pendleton family's (Archibald's grandmother's) former estate, Placentia. Between 1886 and 1889, Archie built Crumwold Hall, where the family would remain until 1942.

He was a pioneer of golf and ice-yachting; the first Captain of the Myopia Hunt Club polo team; and, co-owned a pack of English hounds with Samuel Colgate at New Hamburgh. In yachting, he headed the syndicate which built the Colonia (and was rumored to have been part of the 40-man crew) that defended the America's Cup. His other love was hunting and for 24 consecutive years he made 26 trips west to hunt Big Game and for 45 years he regularly went up to his fishing lodge in New Brunswick. He kept a townhouse on West 53rd Street, and died leaving $2.8 million for his widow and their six surviving children.