Completed in 1889, for Colonel Archie Rogers (1852-1928) and his, "extraordinarily gracious" wife, Anne Coleman (1858-1934). Their 74-room home on the Hudson was built by the Vanderbilt family's architect of choice, Richard Morris Hunt. The Rogers were hugely popular and Crumwold was a beacon for fun. The Poughkeepsie Journal put it in 1946: "families of the other riverfront estates may have spent as lavishly during this period, but it's doubtful if any of them had such a good time doing it"....
zoom_in 15 images 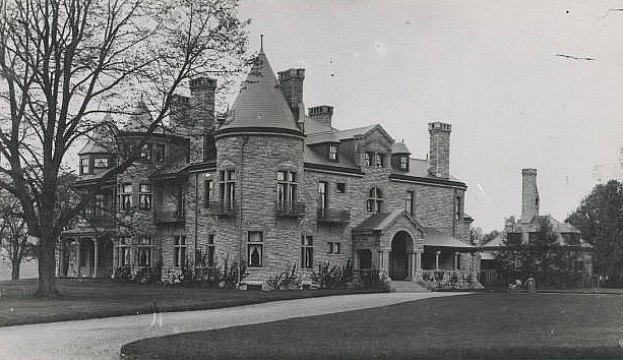 Archie Rogers was named for Archibald Gracie, the merchant with "a soul of a prince," whose country house, Gracie Mansion, is now the official residence of the Mayors of New York City. Gracie was married to the sister of Archie's great-grandfather, Moses Rogers, another illustrious merchant whose townhouse still stands at 7 State Street.

Archie grew up in Hyde Park in a house across from the Town Hall on Main Street. In 1705, his ancestor, Pierre Fauconnier (1659-1746), was granted 10,000-acres in Dutchess County in recognition of his service as personal secretary to Edward Hyde, the Governor of New York and New Jersey with a penchant for cross-dressing. Fauconnier duly, and courteously, named his estate "Hyde Park" and many of his descendants continued to make their home there including Archie's grandmother, Mrs Anna (Pendleton) Rogers, whose grandfather's house stood exactly where the Vanderbilt Mansion stands today.

"She had the millions, but she couldn't have gotten a better man..."

Through building railroads in Wisconsin, Archie was a millionaire in his own right, but the money behind Crumwold came from his even wealthier wife, Anne. Her mother came from one of Georgia's best known families and grew up at the Bulloch-Habersham House, but her money came from the paternal side of her family, the Colemans. Her great-grandfather, Robert Coleman (1748-1825), acquired furnaces and mines in Pennsylvania that saw him become one of the state's very first millionaires. In 1889, Anne and her brother were worth $30 million and said to have made $1,000 a day purely on the interest from their controlling share in the family furnaces. But, as their chauffeur put it: "She had the millions, but she couldn't have gotten a better man or a better manager".

"Just a Big House... with a View for a Bit of Elbow Room"

In 1842, Elias Butler (1805-1878) purchased a farm south of Hyde Park from Augustus T. Cowman (1814-1854). Here, he built a house with a library and greenhouses that he named "Crumwold" for the bend on the Hudson known as 'Crum Elbow' over which it looked from a bluff on its east bank. The house enjoyed a spectacular 60-mile view of the river.

In 1886, Elias' son, Francis Reed Butler, sold the house and farm to the Rogers'. At that time (from 1882 to 1889) the Rogers' were renting Drayton House just south of Archie's grandmother's childhood home, Placentia. They then hired one of the most prominent architects of the Gilded Age, Richard Morris Hunt, who either remodelled the existing mansion or built an entirely new one from scratch. Hunt's friend from Paris, Sidney V. Stratton, also had a hand in its design. Having spent $350,000 on the 74-room chateau, the Rogers family moved from Drayton House into "Crumwold Hall" in May, 1889.

The Colonel was quite matter-of-fact about his new home, calling it, “Just a big house. It was built with a view for a bit of elbow room”. Constructed with coursed Maine granite and trimmed with sandstone, it stands 3-stories high with 8-stone chimneys and 3-towers. Despite its 74-rooms, the Rogers' butler of 40-years - Arthur Bloomfield - recalled that Mrs Rogers seriously considered adding a further floor to accommodate even more guests into what he already called "the big house"! Bringing back Hunt, she only reluctantly dropped her plans when he told her that another floor would ruin the aesthetics.

After purchasing the Crumwold farm, the Rogers' continued to acquire several adjoining farms (eg. Bellefield) until they had accrued an estate of 1,200-acres. Crumwold, the Vanderbilt Mansion and the Roosevelt's Springwood were the three largest estates in Hyde Park and each employed a staff of about seventy. It was said that, "in one way or another, (the three estates) supported almost everybody in the hamlet (of Hyde Park)," but the Rogers enjoyed the reputation of being the best of those families to work for.

Colonel Archibald Rogers shared a vision with his Yale colleague George Bird Grinnell and neighbour, Theodore Roosevelt, for restoring America's wildlands and forest; and, having acquired his estate at Hyde Park, he was able to indulge his lifelong passion for, "scientific reforestation and natural conservation". However, the Colonel was best remembered at Crumwold as a sportsman. He was a pioneer of ice-yachting and rode to a pack of 30-hounds imported from England. He kept 60-horses in his stables at any one time, plus five or six hunters; and, he maintained a polo field on the 30-acre front lawn.

The Rogers children were often joined by others from the local gentry who came to Crumwold for riding expeditions with Colonel Rogers or their governess. In 1888, a young Franklin D. Roosevelt got his first taste of education in the turret room at Crumwold when he was invited to study German with his friends Archie Jr. and Edmund Rogers, under the same governess. After studying for two hours a day, the three boys would then head out to sail wooden boats on the river or build tunnels under the snow.

On winter afternoons, Crumwold's entrance hall doubled-up as a dance school for the more fortunate local children who arrived by sleigh down the Albany Road: "the (highly polished black oak) floor was cleared of furniture, the stuffed mountain goats and wildcats were pushed against the walls... and the rugs were rolled up. Then, the deer heads and great bear skins looked down from the dark, panelled walls, while the mothers, nurses, and governesses looked on, from the chairs long the walls, at the children's efforts to learn to dance". Between dances, the children were often distracted by the cabinet cases filled with Indian artefacts acquired by the Colonel through his friendships with the Crow and Sioux.

Among the Rogers' children who learned to dance here was their youngest son, Herman Livingston Rogers. Described as, "very quiet and conservative" he and his wife became intimate friends with Wallis Simpson and King Edward VIII. Their relationship is described in the history of Herman's villa in the South of France, Lou Viei.

The Rogers loved entertaining and they did so, "without an eye toward social advancement and cared about people based on merit". During its heyday, Crumwold was a fun place to be at any time but over Christmas it came into its own. The hall was decorated with, "a huge tree from their woods topped by a wax angel with gossamer wings, its branches covered with little glass trumpets that you could really blow, glass bells that really tinkled, hundreds of candles, French dolls (and) monkeys on sticks". Santa's arrival was cued by the jingling bells of his sleigh as it drew up outside the front door before handing out presents to all the children, calling them out by name. For at least the first couple of decades of the 20th century, "Santa" was none other than their neighbor Franklin D. Roosevelt sporting a long white fluffy beard and with a pillow stuffed down his front!

It was perfectly normal to have around 40 house guests staying at Crumwold over the holiday season and that number would more than double for the Rogers' famous New Year's Eve Party: "Frequently there would be 100 guests stepping out on the featherbone floor... the climax of the New Year Party came at the stroke of midnight when all present, it was said, would draw the chairs to the center of the hall, stand on them and give a toast... A former servant recalled that rum punch was one of the favorite drinks, ladled from a silver bowl - one of Colonel Rogers' ice yachting trophies."

In 1905, Crumwold had a lucky escape when sparks from a passing locomotive set off a fire in the woods nearby. The fire caught wind and then enveloped a stone house on the estate, valued at $10,000. "The quaint old structure" had been built as a tea house by a former landowner, James Boorman - ironically the same man who built the railroad!

In 1927, while attempting to stop his dog from jumping out of their car to chase a squirrel, Archie Rogers crashed near Butler's Bridge. The injuries he sustained cost him his life the following year. Mrs Rogers followed in March, 1934, when Crumwold became the country home of their youngest daughter, Anne, who was married to New York State Senator J. Griswold Webb. But, just two months later the Senator died here too and from then until 1942 Tom Conley headed a skeleton staff to keep the estate ticking over.

As recalled earlier, the Rogers' youngest son, Herman, was intimately connected with the Duke and Duchess of Windsor. So, when the former King floated the idea of settling in the States after abdicating from the British throne in 1936, it was perfectly logical that Herman drew his attention to his now empty childhood home. It was one of several houses in the running, including Mallow on Long Island, but ultimately they settled in France.

The House Today and Crumwold Acres

In April, 1942, the 306th Military Police Battalion moved into Crumwold. Their duty was to protect President Roosevelt while he was at Springwood during the Second World War. When Roosevelt died in 1945, the Police left and in 1947 Crumwold was sold for $75,000 to Daniel Trotsky who converted it into the Roosevelt School for Jewish Boys. At the same time, he sold off 900-acres of the original estate (including 13-outbuildings) for $210,000 to John W. Golden (1898-1973) and his partners. Just four years later (1952) the school was relocated to Shippan Point in Stamford, Connecticut, and in the meantime Golden began developing the 500-home village now known as Crumwold Acres.

Crumwold Hall was acquired in 1951 by the Catholic Church and then became home to the Eymard Seminary High School. The school continued into the 1970s when it was purchased by J. Homer Butler. In 1983, he sold the mansion and its remaining 69-acres to the Millennial Kingdom Family Church, who continue to occupy it today. Several local residents would like to see it re-integrated once again as part of the community.

Hidden History of the Mid-Hudson Valley: Stories from the Albany Post Road By Carney & Tatiana Rhinevault

The Architecture of Richard Morris Hunt By Susan Stein

The Naturalist: Theodore Roosevelt, A Lifetime of Exploration, and the Triumph of American Natural History By Darrin Lunde

Wallis in Love: The Untold Life of the Duchess of Windsor, the Woman Who Changed the Monarchy By Andrew Morton