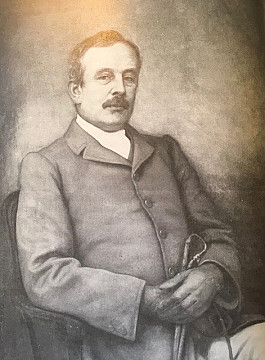 Born in Hull, he was also educated there at Kingston College. In 1869, his elder brother, Charles (1st Baron Nunburnholme of Warter Priory) succeeded their father as head of the Thomas Wilson & Sons Shipping Line. Arthur worked closely alongside his brother and together they continued to grow the business. When Charles died in 1907, Arthur succeeded him. He was Chairman of the Hull Chamber of Commerce and a director of the North Eastern Railway. He was elected Sheriff of Hull in 1888 and High Sheriff of Yorkshire in 1891. For 25 years, he was Master of the Holderness Hunt and he was well-known in Hull as a generous philanthropist, notably for his association with the Victoria Children's Hospital. The foundation stone for Tranby Croft was laid in 1874 and the mansion was completed two years later. In about 1889, he also acquired a sizeable mansion in London at 17 Grosvenor Place that today is the Irish Embassy. His name is also forever associated with the Royal Baccarat Scandal when one of his guests cheated the Prince of Wales while staying at Tranby Croft in 1890.