Completed in 1876, for shipping heir Arthur Wilson (1836-1909) and his wife, Mary Emma Smith (1843-1927). Arthur worked closely with his brother who succeeded their father as Chairman of the Thomas Wilson & Sons Shipping Line. The gatehouse to the 38-acre Tranby estate stood opposite Anlaby House that was home to Mrs Wilson's cousins, the Voases. Tranby Croft was designed by Charles R. Chorley of Leeds and was extended in 1889. The 3-story Italianate mansion was predominantly built with yellow brick from Nottinghamshire and it was lit with electricity from 1892....
zoom_in 1 images 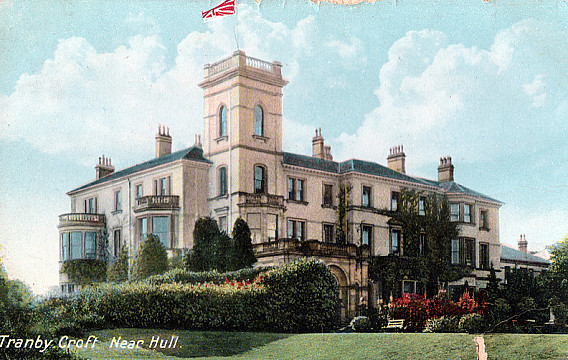 It features a tower that stands 72-feet high (from which Arthur could watch his ships come in) and in the grounds was a large private swimming bath that Arthur allowed, "for the use of all on the Tranby estate". Today, Tranby is best remembered as the place at which the Royal Baccarat Scandal unfolded (1890), when Arthur played host to the Prince of Wales. After Arthur died, Tranby was home to his elder son, Arthur S. Wilson (1868-1938) who married the heiress Alice Filmer. Their son, Arthur Wilson-Filmer (1895-1968) was the last to call the house 'home' and soon after his father's death it became the headquarters of their family business that from 1916 was known as Ellerman's Wilson Line. In 1944, the mansion and surrounding acres were sold for "an amazingly modest price" to the Church Schools Co., becoming the Hull High School for Girls. In 2005, Hull Grammar School relocated here and the two united to become the Hull Collegiate School.