Captain Benjamin Hallowell, Commissioner of Customs for the Port at Boston 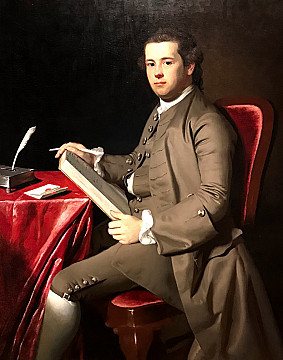 He was born at Boston to a wealthy shipbuilder and commanded the "King George," a 20-gun battleship towards the end of the French-Indian War (1754-1763), "rendering essential service notably at the retaking of Newfoundland". His wife was a first cousin of President John Adams' mother, but her branch of the family and the Hallowells were Loyalists. Benjamin became one of the most detested men in Boston - indeed "the second most detested man" - not only being a Mandamus Councillor, but also as the Commissioner of Customs for the Port of Boston during the Boston Tea Party.

The Second Most Detested Man in Boston...

In 1764, the Hallowells were living in their "splendid" new brick house on Hanover Street in Boston. But, in August the following year (1765) an angry mob - “a great number of disguised ruffians, armed with clubs, staves, etc.,” - invaded his home in protest to the Stamp Act. A newspaper report told: "... they rushed onward, increasing still in numbers and fury, to the new and elegantly finished building of Benjamin Hallowell, Jr. Esq., where, after tearing down the fences, breaking the windows, etc., they at length entered the house, and, in the most savage and destructive manner, broke and abused his furniture, chairs, tables, desk, glasses, china, and, in short, everything they could lay their hands on; at the same time purloining his money and disbursing his private books and papers until, by the effect of wine and other stores of his cellar, they ripened in ebriety and madness, and became fit for the next more desolating and barbarous operation". Following the attack and fearing for the safety of his family, Hallowell bought a house in the country.
Continued Harassment and Scrapping with the Admiral

In 1774, returning home to his country mansion, Hallowell House in Roxbury, he was chased by an angry mob of 160-horsemen which prompted him to move his family to the safer confines of Boston itself. In 1775, tensions were high everywhere, and Hallowell is remembered for his fight with the British Admiral Samuel Graves: Hallowell had written to him four times to explain why he had forcibly taken hay that was not his from the Port. Graves never bothered to reply, so when Hallowell passed him in Milk Street he demanded an explanation which, "as a gentleman, had a right to expect". It was reported:

"To this civil question, the Admiral replied in his usual style; and while (Hallowell) was whispering a challenge to him, returned a blow in the face. Though Mr. Hallowell was unarmed, the Admiral had recourse to his sword, on which the former rushed upon him, forced it from him, broke it over his knee, and then flung it in Graves’s face; after this they went to it with their fists, but were soon parted. - The Admiral has come off with a black eye. He has not yet proposed a renewal of battle, probably preserving himself for the Yankies, who have already carried off all his fresh stock, burnt his hay on the islands, and destroyed the light-house twice under his very nose… In his own department, the Admiral is more hated and despised, if possible, than he is by the army and rebels".

In March, 1776, Hallowell and his family left Boston with the British Army for Halifax in Nova Scotia. There, he wrote: "If I can be of the least service to either army or navy I will stay in America until the Rebellion is subdued". In July, 1776, the Hallowells sailed for England and lived at London, "in handsome style but not as splendidly as when in Boston". Aside from his houses in Boston and Roxbury, he had owned a large amount of land in Kennebec, Maine, but all this was confiscated. By way of compensation, he was granted lands in Manchester (England), two other towns in Nova Scotia, and a Township in Upper Canada that bears his name. Despite all their losses, when Mrs Adams visited them in 1784, she recalled that the Hallowells treated her, "with respect and kindness".

Benjamin Hallowell married his wife, Mary Boylston, at Boston in 1746. She was part of a very well-connected family: Her brothers were the very wealthy merchants Thomas and Nicholas Boylston who also settled in London; and, her brothers-in-law were Moses Gill, Lieutenant-Governor of Massachusetts, and Captain Timothy Rogers. The Hallowells had fourteen children but only three were alive by 1798: Ward Nicholas Boylston, Benefactor of Harvard University; Admiral Sir Benjamin Hallowell-Carew, one of Nelson's "Band of Brothers"; and, Mary, the wife of The Hon. John Elmsley, Chief Justice of Upper Canada.