Built in 1759, for the Rev. East Apthorp (1733-1816) and his wife Elizabeth Hutchinson (1740-1782), grand-daughter of William Shirley, Governor of Massachusetts. Although the third story was a later addition, when the house was built the Puritans were intimidated by its grandeur and supposed it to be an Episcopal Palace due to the rumors then circulating that the Anglican Church intended to make Apthorp a Bishop. During the Revolution, Israel Putnam was headquartered here and after he left the captured British General John Burgoyne was kept here under house arrest. Today, it is less conspicuous as the Master's Residence at Harvard's Adams House....
zoom_in 4 images 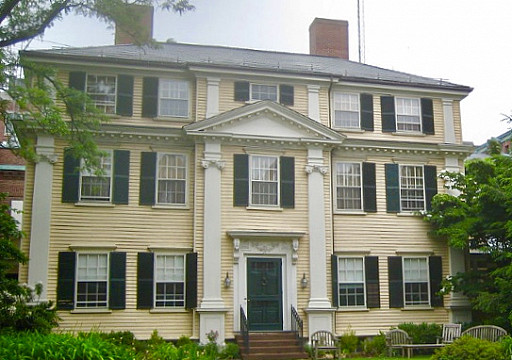 The Rev. East Apthorp was the fourth son of Charles Apthorp, Commissary-General to the British forces in Boston and reckoned to have been the city's wealthiest merchant. In 1759, East returned from England with a degree from Jesus College, Cambridge, freshly tucked under his belt and in that same year founded Christ Church at Cambridge, Massachusetts. He almost certainly employed Peter Harrison - the same man who designed Christ Church - to build his new home which is almost identical to the Longfellow House, built in the same year, although that house has a fanlight in the pediment over the front door.

Apthorp's close association to the Anglican Church made him a target of continued hostility and in 1764 he left for England, never to return. He sold his home to John Borland who through his wife, Anna Vassall, had inherited Peacefield at Quincy - afterwards the long time home of the Adams family - which they used sparingly as their summer home. The Vassall family were associated with three of the oldest houses in Cambridge including this one: Mrs Borland was the aunt of - albeit the same age as - John Vassall who built the Longfellow House and of his sister, Mrs Oliver, who built Elmwood. In order to accommodate their then five children, servants and two slaves, the Borlands added the third floor to the Apthorp house, giving it its present appearance.

The Borlands were Loyalists and in 1775 they fled to what was then still the safe confines of Boston. General Israel Putnam commandeered the empty house and returned here victorious after the Battle of Chelsea Creek that May. Ironically, John Borland died that day, falling from a ladder he'd ascended at his house in Boston to get a better view of the very same battle! As for Putnam, he planned his next battle here - the Battle of Bunker Hill - that would cement his name into the history books of the United States.

Its next occupant was somewhat less than happy to be here: In October, 1777, British General “Gentleman Johnny” Burgoyne, surrendered himself and his army after their defeat at the Battle of Saratoga. Under the terms of the surrender, they would not be kept as Prisoners of War but instead would be held at Cambridge until British ships arrived to take them home. For the pleasure of being confined here, Burgoyne was required to pay £150 in rent until April, 1778, for what he called an, "unfurnished house out of repair" which he felt at that price would have otherwise secured him, "a palace in the dearest metropolis of the world"! According to popular legend his ghost haunts the place, but one gets the impression that neither he nor his spirit would have wished to have stayed here any longer than was necessary! In January, he sailed back to his townhouse in Mayfair.

After Burgoyne shipped out, his second-in-command, Major-General William Phillips replaced him in the Apthorp house. By this time relations between locals and "the enemy" had boiled over and a British officer, Lt. Browne, was shot in the head for disobeying an order from his captor. His killer was acquitted by a jury of fifteen Cambridge men but Phillips requested that he be given a proper funeral at the Anglican Christ Church: “… the Americans seized the opportunity of the church being open, which had been shut since the commencement of hostilities, to plunder, ransack, and deface every thing they could lay their hands on, destroying the pulpit, reading-desk, and communion-table, and ascending the organ loft, destroyed the bellows and broke all the pipes...". Phillips' angry remonstrations at their treatment resulted in his being placed under house arrest.

Back to the Borlands, On to the Warlands

There was a silver-lining to John Borland's ironic demise: having died before the government ruled to confiscate all property belonging to Loyalists, his heirs lost nothing. In 1784, his son-in-law, Jonathan Simpson, bought out his wife's siblings and moved in with his family. It was their home until 1802 when Simpson's financial situation forced him to divide the property into two - allowing for what is now Linden and Plympton Streets - and selling the house to Dr Timothy Lindall Jennison and Thomas Warland.

Thomas Warland was a tailor who had become wealthy through property while Dr Jennison was a well-known a physician - married to Maria Belcher, a grand-daughter of Governor Jonathan Belcher - and a cousin of the Borlands: his mother (Abigail Lindall) was a first cousin of John Borland's mother (Jane Lindall). Apparently another link to the past came in 1803 when East Apthorp's sister, Mrs Susan Bulfinch, wrote that her son-in-law, Joseph Coolidge III, had a taken a room with the Jennisons - most likely for his occasional business trips up to Cambridge from his home in Boston.

After a few years, Jennison leased and later sold his half of the house to Warland, and there is an alternative belief that it was Warland who then added the third story. Either way, he remained in the house until his death in 1837 when he left it to two of his daughters: Mary, the wife of Dr Sylvanus Plympton; and, the twice widowed Elizabeth.

Elizabeth occupied one half, leasing out rooms to Unitarian clergymen and Harvard affiliates while the Plymptons occupied the other half with their four children. Notable among the Plympton children was Mary who in 1849 married the Rev. Joshua Young, an abolitionist and key figure in the Underground Railroad: "... how many poor scared creatures I secreted in cellars or garrets until the danger was past I cannot tell, only this I did again and again, both while living in Boston and in Burlington". The Plymptons lost their only son in the Civil War and in 1865 Dr Plympton died. In their honor, Chestnut Street, which runs adjacent to the Apthorp house, was renamed Plympton Street.

After Mrs Plympton died in 1867, the house was left jointly to her three daughters. In 1901, having last been occupied by Helen and her distinguished husband, Professor William Harmon Niles, the sisters sold the house and 26,457-square feet of land for $80,000 to the Randolph Land Trust Company which in 1897 had built Randolph Hall in front of Apthorp House. The Randolph Company was owned by Professor Archibald Cary Coolidge and his four brothers. Coming full circle, the Coolidge brothers were the great-great grandchildren of the Rev. East Apthorp's sister, Mrs Susan (Apthorp) Bulfinch.

Driven by profit, the Coolidge brothers converted the Apthorp House into an exclusive "Gold Coast" dormitory connected to Randolph Hall which from 1901 to 1930 offered the most luxurious accommodation to those undergraduates who could afford it. Life at Apthorp during the Roaring '20s recalled a designated bootlegger that allowed them to flout Prohibition; a pet monkey; football games in the halls; beer bottles regularly smashed against the athletics hall; water fights, and snowballs flying through windows.

In 1931, after 30-years of student life, the house was fully renovated before being taking on its new, sedate, life as residence to the Faculty Deans of Adams House, as it remains.

Explore Harvard: The Yard and Beyond By Harvard University

Ghosts of Harvard: A Novel By Francesca Serritella