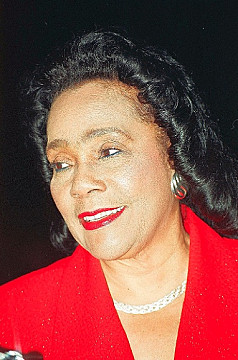 She was born in Heiberger, Alabama, and educated at the segregated Lincoln Normal School. She was accepted to study music at Antioch College in Yellow Springs, Ohio, and was one of its very first black students. Having joined the Antioch chapter of the National Association for the Advancement of Colored People (NAACP), she was not invited back and was unable to complete her teaching certificate. Winning a scholarship, she transferred from Antioch to the New England Conservatory of Music in Boston, during which time she met Martin Luther King Jr., then studying for his Ph.D at Boston University. They were married soon afterwards on the lawn of her mother's house back in Alabama in 1953 - having removed the vow to obey her husband.

She moved to Montgomery, Alabama, where her husband was the new Pastor of the Dexter Avenue Baptist Church and where she too played an active role through music and teaching. In 1960, fearing for her husband's life when he was given 4-months hard labor in Alabama after picketing a department store, her friend the noted advocate and civil rights activist Harris Wofford (later U.S. Senator from Pennsylvania) used his influence that resulted in JFK speaking to Coretta personally before sanctioning MLK's release.

In 1962, she was a delegate for the Women's Strike for Peace Conference in Geneva, Switzerland, but on the whole her husband preferred her to take a less public role to bring up their children. In 1966, she spoke out against sexism within the Civil Rights Movement during an interview with the New Lady magazine: "Not enough attention has been focused on the roles played by women in the struggle. By and large, men have formed the leadership in the civil rights struggle but... women have been the backbone of the whole civil rights movement." In January, 1968, Coretta participated in the Women's Strike for Peace protest in Washington, D.C. and co-chaired the Congress of Women conference.

After her husband was assassinated in Memphis on April 4th 1968, she immediately took up the baton to continue his message. She founded and was the first President of the Martin Luther King, Jr. Center for Nonviolent Social Change in Atlanta, and in 1969 was the lead speaker at the "Moratorium to End the War in Vietnam" demonstration in Washington D.C, where she led led a crowd carrying candles past The White House.

In 1983, she was arrested with two of her children while taking part in an anti-apartheid protest at the Embassy of South Africa in Washington, D.C. Ironically, on the same day, after years of campaigning to have at least one national holiday a year in tribute to an African-American man (she said, "at this point, Martin is the best candidate we have"), President Reagan signed the legislation to create "Martin Luther King, Jr. Day".

She espoused numerous causes to advance human rights and social justice and was an early supporter of LGBT rights as well as a co-founder of the Committee for a Sane Nuclear Policy (Peace Action). For her support of the former, she answered her critics: "I still hear people say that I should not be talking about the rights of lesbian and gay people and I should stick to the issue of racial justice.... But I hasten to remind them that Martin Luther King, Jr. said, 'Injustice anywhere is a threat to justice everywhere'... I appeal to everyone who believes in Martin Luther King, Jr.'s dream to make room at the table of brotherhood and sisterhood for lesbian and gay people".

In the year before her death, she gifted the use of her name to her former school, Antioch College, to create the Coretta Scott King Center for Cultural and Intellectual Freedom. Its mission as an experiential learning resource is to address issues of race, class, gender, diversity, and social justice for the campus and the surrounding community.

She was - and continues to be - the recipient of numerous honors and her name is also attached to an Academy for Young Women's Leadership in Atlanta and a Medal issued by the American Library Association. She continued to live at her and her husband's home at 234 Sunset Avenue in Atlanta up until 2004. She died three years later and was survived by all four of their children who all took a role in the Civil Rights Movement.