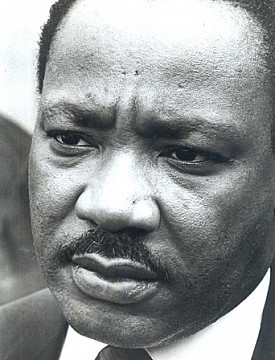 He was born at 501 Auburn Avenue in Atlanta, Georgia. He was educated at what were then black-only schools: the Booker T. Washington High School and the highly respected Morehouse College during which time he was noted both as an orator and football player. He graduated from: Morehouse with a B.A. in Sociology (1948); the Crozer Theological Seminary in Chester, Pennsylvania, with a B.Div (1951); and, Boston University with a Ph.D. (1955), one year after being called as Pastor of the Dexter Avenue Baptist Church in Montgomery, Alabama. In 1955, he led the Montgomery Bus Boycott following Rosa Parks' arrest for not giving up her seat in the colored section of a bus to a white passenger. Concluding the 385-day boycott - during which time MLK was arrested and his home was bombed - racial segregation was ended on city buses.

His role in the case of Rosa Parks made him a national figure and the obvious choice as spokesperson for the U.S. Civil Rights movement. In 1957, he co-founded and was elected the first President of the Southern Christian Leadership Conference (SCLC) that sought to galvanize the power of the churches towards nonviolent protests to bring about civil reform. In the 1960s, utilizing the media, he organized and led an increasing number of nonviolent marches against racial segregation in the Southern states - a system known as the "Jim Crow laws". This frequently saw him arrested and his peaceful rallies often provoked violence, but his public message continued to grow. In 1963, as President of the SCLC, he was among the six leaders of the "March on Washington for Jobs and Freedom".

"I Have a Dream," the Civil Rights Act 1964, and the Nobel Peace Prize

In Washington, MLK's principal objectives were to: end racial segregation in public schools; bring about meaningful Civil Rights legislation, including a law prohibiting racial discrimination in employment; see a $2 minimum wage for all workers; and self-government for Washington, D.C., then governed by Congressional committee. Standing under the Lincoln Memorial in front of a crowd of 250,000, he delivered his "I Have a Dream" speech - considered one of the most iconic speeches in American history.

In 1964 the Civil Rights Act was passed that outlawed, "discrimination based on race, color, religion, sex, or national origin". Nonetheless, that December, a local judge in Montgomery, Alabama, passed an injunction banning groups of 3 or more people associated with the SCLC and other major Civil Rights organizations linked to it from gathering. MLK publicly denounced the ruling and then led a peaceful march to city hall: the ensuing police violence shone a nationwide spotlight on Alabama's racism.

In 1963, Time magazine had named him their "Man of the Year". In 1964, at the age of thirty-five, he became the youngest man to win the Nobel Peace Prize in recognition of his nonviolent campaign for Civil Rights and Social Justice for African-Americans across the U.S. He donated all his prize money towards continuing the Civil Rights Movement.
Taking Civil Rights to the North & the "Poor People's Campaign"

In 1966, he took the Civil Rights movement north, starting in Chicago in an attempt to end discrimination over white couples being given preferential housing over blacks of the same economic status. The negative reception with which they were met was worse than they were used to in the south and led MLK to cancel a march for fear of rioting. Continuing their push for economic injustice, MLK and the SCLC spearheaded the "Poor People's Campaign" calling for funds to be spent on improving the living standards of the economic sub-class of Americans, irrespective of race, rather than pouring money into the war in Vietnam. It was seen as controversial even within the Civil Rights movement.

One month before the campaign was due to start, MLK was shot dead on the balcony of the hotel in which he was staying in Memphis, Tennessee. His last words were to musician Ben Breach: "Ben, make sure you play 'Take My Hand, Precious Lord' in the meeting tonight. Play it real pretty". He is buried at the Martin Luther King Jr. National Historic Park by the house in which he was born in Atlanta. It still remains unanswered whether his murderer acted on his own, or was part of a conspiracy. He was survived by his wife since 1953, Coretta Scott, and their 4-children, all of whom in different ways took up the torch for Civil Rights. Their last home was at 234 Sunset Avenue, Atlanta.

The Legacy of Martin Luther King Jr., and the Civil Rights Act, 1968

Martin Luther King's dream was that all inhabitants of the United States would be judged by their personal qualities and not by the color of their skin; and, "No injustice, no matter how great, can excuse even a single act of violence against another human being.". For this he was arrested more than 20-times and assaulted at least four times. In 1977, he was posthumously awarded the Presidential Medal of Freedom by Jimmy Carter: "He gazed upon the great wall of segregation and saw that the power of love could bring it down. From the pain and exhaustion of his fight to fulfil the promises of our founding fathers for our humblest citizens, he wrung his eloquent statement of his dream for America. He made our nation stronger because he made it better. His dream sustains us yet".

MLK became the symbolic figurehead of the Civil Rights Movement in the U.S., and by setting a worldwide precedent became a world leader in his own right. He came 2nd (behind Mother Theresa) in Gallup's "List of Most Widely Admired People of the 20th Century" and in 2000, he was voted 6th in Gallup's online "Person of the Century" poll. He was voted 3rd in the Greatest American contest conducted by the Discovery Channel and AOL. Both MLK and his wife, Coretta, were awarded the Congressional Gold Medal in 2004. MLK's is one of the faces that will appear on the new $5 note from 2020.

Martin Luther King Jr. Day is a federal holiday held on the third Monday of every January - inaugurated in 1983, it was officially observed for the first time in all 50-states in 2000. It attracts large crowds and aside from current civil rights leaders and politicians, speakers have included Presidents. Remembrances are also observed during Black History Month (February), and on the anniversary of his death. Days after his assassination, the Civil Rights Act of 1968 was passed which included the Fair Housing Act.

Image Courtesy of the U.S. Embassy, New Delhi, on Flickr