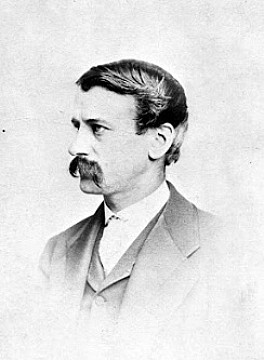 He was born at Danskammer Point, New York. He was named for his godfather, David Maitland, son of Lord Dundrennan, who was a banker of Maitland & Kennedy at New York. He studied law at Trinity College, Hartford. In 1858, he sailed to Europe and studied art in Paris and Rome, sharing quarters for two years with master sculptor Augustus Saint-Gaudens who became one of his closest lifelong friends. In 1869, he was appointed Charge d'Affaires to the Papal States and in 1871 Consul-General in Rome, but without an adequate salary he quit the Diplomatic service. Returning to New York, he was by then a painter and already a renowned stained glass artist. His work features in many churches and government buildings across the States. He also completed private commissions such as at Biltmore, and later worked with his daughter, Helen, who was also a very talented stained glass artist in her own right.

He is credited for being chief among those who created the Metropolitan Museum of Art in 1872: “Not only did he... first start the agitation for a representative museum in this city, but he also drafted suggestions for the carrying out of the project, with the result that the Metropolitan Museum as it exists to-day is largely organized on the lines he laid out”. He was Director of American Fine Arts at the 1878 Paris Exposition Universelle and was made a Chevalier of the Légion d'Honneur for his work. He hosted former U.S. President Ulysses S. Grant who appreciated his effort to show younger American artists who were working hard to get established. Maitland is also credited with introducing fine American painting into France. In 1866, he married Helen Neilson, a niece of Hamilton Fish. They were the parents of seven talented children, notably Helen and Margaret. In his memoirs, Day Before Yesterday, he wrote, "It is strange that of all my grandfather's children and grandchildren I am the only one who has left any descendants."