Completed in 1895, for George Washington Vanderbilt II (1862-1914). Covering 178,926 square feet, Biltmore is the largest privately-owned house in the United States, though the last member of the family to live there was in 1956. In contrast to many other Gilded Age Estates, notably those of his siblings, Vanderbilt's intention was to create a self-sustainable estate, providing work and income for the local community: a tradition that is upheld to this day. The 250-room French Renaissance-style chateau at the center of the Biltmore Estate has become an American icon. Opened in full to the public from 1965; the chateau, Vanderbilt's renowned art collection, its 8,000-acres of grounds and the magnificent array of landscaped gardens attract over a million visitors a year, making it the most popular historic house destination in the United States....
zoom_in 20 images 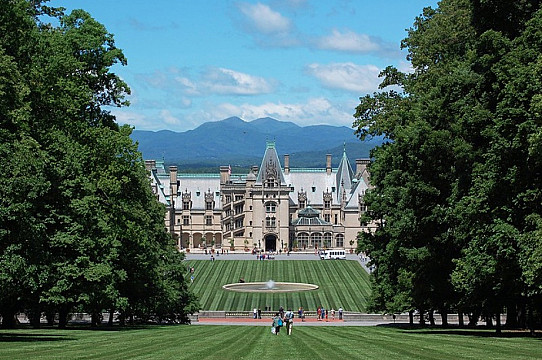 George's father died in 1885 and as the youngest child and still as yet unmarried, he took to accompanying his mother, Maria (Kissam) Vanderbilt, on her trips to North Carolina. He became so enchanted with Asheville that rather than building a summer estate in the usual fashionable watering-holes of the wealthy as his siblings had, by 1888 he had chosen to establish himself within the Blue Mountain Range. The following year (1889), he purchased 2,000-acres at Asheville, adding to it until the estate eventually encompassed 125,000-acres of rolling woodland. He then hired the Vanderbilt family's go-to architect, Richard Morris Hunt (1827-1895) - who was also working on Marble House in Newport for George's brother, Willie - and America's pre-eminent landscape architect, Frederick Law Olmsted (1822-1903), to build his "little mountain escape" surrounded by gardens.

Not for Pleasure Alone

Similarly to Joseph W. Drexel (1833-1888) the generation before, George Vanderbilt was one of the most progressive and forward thinking multi-millionaires of the Gilded Age. Rather than building a museum-piece home that would only serve his own pursuit of pleasure, his idea was to build a house to make Americans proud on a working estate that would provide gainful employment and bring prosperity to the local community.

In 1889 - the same year that work started on the chateau - George established the "Biltmore Forest School" which was the first institute for scientific forestry in the United States. The majority of the estate's employees lived at the town of Best and that same year Vanderbilt purchased the town and renamed it "Biltmore Village". In a time when plumbing and central heating was unheard of in ordinary houses, he provided both in the cottages he built for his employees. He paid good wages and at Christmas all the staff and their children were invited up to the chateau for a celebration - each one receiving a present from under the towering tree in the Great Hall.

In the summer of 1889, George Vanderbilt and his architect, Richard Morris Hunt, travelled to France and England in search of inspiration for Biltmore's design. Among the many houses they visited in both countries, in England they stayed as the guests of Baron Ferdinand de Rothschild (1839-1898) at the recently completed Waddesdon Manor which had been modelled on the chateaux of France's Loire Valley. Hunt took his principal inspiration for Biltmore from the Rothschild house which in turn had been modelled on the Chateau de Chambord with added inspiration from Château de Blois and Chateau de Chenonceau. In many ways, Biltmore was an expanded version of Waddesdon Manor.

Back in America, it took 1,000 workers and 60 stonemasons six years to build Biltmore, all at an estimated cost of $6 million, which included the construction of an $80,000 railway just to get the materials on site! The estate is entered via the arched Gate Lodge from which proceeds a three mile driveway past wild streams, woodland pools and ravines before coming out onto a grand esplanade lined by an avenue of trees.

The gardens closest to the main house follow the lines of those at the Château Vaux-le-Vicomte near Paris, while elsewhere are found the 16th century Italian gardens and their three reflecting pools; the four-acre English Walled Garden; the Azalea Garden; and, the shrub garden interlaced with ponds and lagoons. In addition to these, the "Biltmore Estate Winery" processes more than 250 tonnes of grapes annually.

The chateau's 250-rooms required a domestic staff of 80-servants and included 34 bedrooms, 43-bathrooms and 3 kitchens, with 65-fireplaces. To mention but a few, each of the principal rooms within the chateau have their own distinct style: the 70-foot arched ceiling in the 3,000 square foot medieval banquet hall provides a canopy for the 64-seat table while its carved mantel spans three fireplaces and Flemish tapestries adorn the walls telling the stories of Vulcan and Venus.

To touch on just some of its other wonders: the 18th century painted ceiling in the elaborately-panelled Baroque library was imported from a Venetian palazzo. The room stands over two stories high and houses Vanderbilt's collection of over 20,000 books - not just for show either, he was reckoned the best-read man in the US, said to devour 80-books a year! Other rooms and features of note include the indoor sunken, marble Winter Garden with its domed skylight supported by Gothic vaulting which is centered by a fountain attributed to Karl Bitter; stained glass windows by Maitland Armstrong; and, the Tapestry Gallery features three tapestries made in 16th century Belgium as well as portraits of the Vanderbilts by John Singer Sargent... and, so the list goes on!

Particularly during the six years it took to build the chateau, Vanderbilt made several trips to Europe specifically to furnish his new home. As a base there, he purchased 53 Rue de Varennes in Paris which he later leased to his friend (and frequent visitor to Biltmore) Edith Wharton (1862-1937), the doyenne of Gilded Age literature. Literally thousands of fine pieces dating from the 15th to the 19th centuries and from all corners of the world made their way from Paris to Asheville and can still be seen at Biltmore today.

Among the vast collection of treasures on display at Biltmore are paintings by Pierre-Auguste Renoir (1841-1919) and James Abbott McNeill Whistler (1834-1903); tapestries that once belonged to Cardinal Richelieu (1585-1642); and, a gaming table with a set of ivory chessmen formerly in the possession of the French Emperor Napoleon Bonaparte.

Surrounded by such opulence, it could have been easy to forget the day-to-day lives of ordinary folk, but Vanderbilt continued to give back to the community, particularly in Biltmore Village where he erected All Souls Cathedral, a hospital, a school and shops.

In 1898, George met someone with whom he shared his ideals in Edith Stuyvesant Dresser (1873-1958) and they were married in Paris that year. In 1901, they co-founded the "Biltmore Estate Industries" providing apprenticeship programs in traditional crafts such as weaving and woodworking. Students were even encouraged to make reproductions of furniture found within the chateau that they could then sell for personal income. Spurred on by the programme's success, Edith established the "School for Domestic Science" where young women with poor job prospects were trained in skills such as cooking and cleaning, whereby they could find employment.

Aside from building a community, collecting art, and entertaining his friends, George Vanderbilt held a keen interest in horticulture and agriscience. At Biltmore, he oversaw experiments in scientific farming that included animal bloodline breeding and forestry. In 1892, he hired Gifford Pinchot as his forest manager, the same man who would become the 1st Chief of the U.S. Forest Service and the "Father of American Conservation".

Vanderbilt died in 1914, and though greatly saddened, his widow continued with her responsibilities towards the estate and the community. She built a new hospital, encouraged literacy programs, and served as president of the State Agricultural Society. In 1915, in an effort to keep Biltmore self-sustainable and honor her husband's memory, she sold 87,000-acres to the U.S. Forest Service, creating the Pisgah National Forest. Today the estate has been reduced to 8,000-acres, but as was Vanderbilt's dream, under his grandsons it remains completely self-sustainable and provides a legion of jobs for the local community.

The Vanderbilts only child, Cornelia Stuyvesant Vanderbilt (1900–1976), inherited the Biltmore estate in trust and from 1924 lived there with her first husband, Hon. John Francis Amherst Cecil (1890-1954). In 1930, America was in the grips of the Great Depression and the City of Asheville asked the Cecils if they would open the house to the public in the hope that it would increase tourism. They willingly obliged, though as it was still their home they kept certain areas private. Later, during World War II, priceless treasures from the National Gallery of Art in Washington DC were stored at Biltmore.

In 1932, Cornelia was the same age as the century and life in the country in the midst of the Depression was proving dull for an heiress with a trust fund of $50 million. Leaving her mother and husband to manage the estate, she took off for the bright lights of Manhattan under the premise of studying art. Two years later, she was in Paris (never to return to the States), where she divorced her husband, dyed her hair pink and changed her name to "Nilcha"! In the late 1940s, she found love in England, marrying the former aide-de-camp to the Governor-General of Canada and living between London and their farm outside Oxford. After his death she married once more before her own in 1976.

In 1925, eleven years after George died, Edith remarried Senator Peter Goelet Gerry (1879-1957). She continued to live in the main house up until two years before her death in 1956. During that time, with her husband involved in politics, she and her ex-son-in-law, John Cecil (still living in Asheville) continued to successfully manage the estate.

In 1960, Cornelia's two sons (who inherited Biltmore on her death in 1976), George and William, returned to the house in which they born to assume management of the family estate. George chose to operate "Biltmore Farms" while his younger brother, Bill Sr., took on the task of managing the Biltmore estate, through "The Biltmore Company". In 1965, the house was fully opened to the public and today Bill Sr.'s son, William Amherst Vanderbilt Cecil Jr., operates the estate as President of the Biltmore Company.

The Last Castle: The Epic Story of Love, Loss, and American Royalty in the Nation's Largest Home By Denise Kiernan

Lady on the Hill: How Biltmore Estate Became an American Icon By Howard E. Covington Jr.

Under a Gilded Moon By Joy Jordan-Lake

Biltmore Estate: The Most Distinguished Private Place By John Bryan

A Pictorial Guide to Biltmore By The Biltmore Company

Around Biltmore Village By Bill Alexander

The Biltmore Nursery: A Botanical Legacy By Bill Alexander

Exploring Biltmore Estate from A to Z By Chris Kinsley