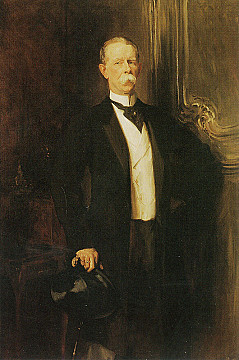 He was born in New York City and enjoyed an impeccable American lineage as a direct descendant of both John Winthrop, 2nd Governor of Massachusetts, and Peter Stuyvesant, the last Dutch Governor of New York. He graduated from Columbia College (1860) before practicing as a lawyer. He was also Vice-President and Trustee of the Union Square Savings Bank; Trustee of the United States Trust Company; and Trustee for the Institute for Savings of Merchants' Clerks. However, the greater part of his life was spent in leisure and he was one of the most important members of the 400. He, "influenced a great influence over the social life of New York. He was a man of extraordinary taste, one of the initial sponsors from 1898 of the American Academy in Rome, and the long-serving President of the Knickerbocker Club in New York. He was identified with an endless variety of cultural, civic and charitable enterprises". He is perhaps best remembered today as Edith Wharton's most important intellectual mentor.

In her memoirs, Edith Wharton revealed that it was Winthrop who encouraged her to open her mind to the evolutionary sciences by reading the likes of Darwin, Huxley, Spencer and Haeckel, and other books he suggested, "filled some of the worse gaps in my education". He travelled with the Whartons to Italy in the 1880s and 90s and was a frequent guest at The Mount. He came to see her during her affair in Paris in 1908 and she was devastated when he died in 1916, writing to Sara Norton that, "most people thought Egerton the slave of convention" but in person he was honest, tender and sincere.

His character helped create Ned Van Alstyne in The House of Mirth and Edith's novellas which became Old New York were mostly sourced from, "left-over reminiscences picked up from Mamma, Grandmamma, and Egerton". But, she regretted her creation of Sillerton Jackson (an amalgamation of Winthrop with Ward McAllister) who appears in Old New York and The Age of Innocence: "the more I ponder over our long friendship, the more I despair of portraying him; for never... have an intelligence so distinguished and a character so admirable been combined with interests for the most part so trivial".

He was an accomplished collector of art and kept the villa now known as Quatrel as a summer home in Newport. In New York, he lived at 23 East 33rd Street designed by Richard Morris Hunt and famous for its Louis XVI Drawing Room, "every article of furniture was imported from France including the papier mâché ornamentations". Edith Wharton remarked that, "his house was the first in New York in which an educated taste had replaced stuffy upholstery and rubbishy 'ornaments' with objects of real beauty in a simply designed setting". He married Charlotte Bronson, grand-daughter of Isaac Bronson, and they were the parents of three children. After he married, he moved to Paris for the duration of the U.S. Civil War, only returning briefly to New York after his wife's death in 1872, and then again to put his sons through Harvard in 1878. Nonetheless, he continued to spend most of his time in Paris up until 1886. He travelled often and died at London and leaving $1.4 million between his two sons and his grand-daughter, Charlotte Fowler.

The House of Mirth By Edith Wharton