Completed in 1879, for Egerton Leigh Winthrop (1838-1916). It was designed in the French Second Empire style by Richard Morris Hunt and was famous for its Louis XVI Drawing Room. Although long since demolished and its contents dispersed, it is chiefly remembered today through the writings of George William Sheldon, the noted art critic for the New York Evening Post who featured the house in his book, Artistic Houses: The Most Beautiful and Celebrated Homes in the United States, published in 1883: "Few apartments in this city have been treated with such persistent determination to reproduce in all respects the forms, color, and feeling of a particular era"....
zoom_in 5 images 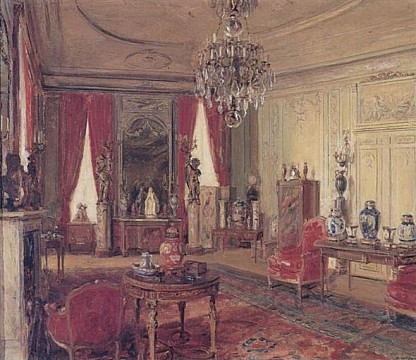 The living embodiment of American aristocracy, Egerton L. Winthrop was (to mention but three) a direct descendant of the Dutch Governor of New York, Peter Stuyvesant; the 1st Lord of the Manor of Livingston, Robert Livingston; and, the 2nd Governor of the Massachusetts Bay Colony, John Winthrop. He wasn't only a member of Mrs Astor's "Four Hundred," he was the member to whom other members turned to on matters of taste, and there wasn't a fashionable place in western society that he didn't know about.

Yet neither was Winthrop just another dandy, he was beloved by Edith Wharton as her most influential intellectual mentor and she was forever grateful to him for filling in, "some of the worse gaps in my education". He moved his young family to Paris during the Civil War and remained there, even after the death of his wife, until 1878. Possessed of a sartorial elegance, old-fashioned charm, and with a carte-blanche into the smartest salons in the French capital, he was better positioned than perhaps any other New Yorker (ahem, Alva et al) who aspired to introduce une tranche of French elegance to New York.

Sheldon tells us that in the Drawing Room alone, Winthrop went, "so far as to import from France every article of furniture used - even the papier mâché ornamentations of the walls and ceiling, and the carved marble mantel-piece itself". Edith Wharton - who might easily have focused on interior design over a literary career - paid her mentor high praise for the manner in which he decorated his winter home: "his house was the first in New York in which an educated taste had replaced stuffy upholstery and rubbishy 'ornaments' with objects of real beauty in a simply designed setting". Sheldon himself was no less admiring: "Elegance belongs in full measure to Mr. Winthrop's Drawing Room".

Sheldon describes the, "gilded furniture of exotic woods (cabinets, tables, writing desks, etc.)... Ornamented with that beautiful gilt bronze-work of festoons, masks, figures, and arabesques directly molded and chiseled and carved, after the manner of the celebrated Gouthière". He pays particular attention to a large marquetry table, "still as smooth as glass," that made him think of the marquetry work of Riesener, "a man of infinite ingenuity... and Mr. Winthrop has cabinets of whose clever contrivances for convenience or concealment Riesener himself would not have been ashamed to be the author".

There were several fine specimens of tapestries, "wrought after the original paintings by Le Brun" and "a magnificent example" that hung in front of the china closet, "glowing with the mellowness of tone that age imparts, and, depicting a landscape with five heroic figures". The china closet sparkled with old Sèvres, Chelsea, and other porcelains, but it was the north-east corner of the room that shone with perhaps its most impressive piece, "the exquisite Vernis-Martin panel". As a whole, the room was illuminated at night with a shimmering glow from the crystal chandeliers and sconces over head.

Descending the stairs outside the Drawing Room down to the ground floor, Sheldon nods a head at, "the Louis Seize library with its book-cases made after some fine specimens in the Louvre, and its Louis Seize mahogany writing-table" before describing the Reception Room, "where again almost everything is an importation from France. The mantel is a copy of one in the Louvre, of Henry the Second's time (ie., mid-Sixteenth century), said to be the work of Goujon... the tapestries, woven at Beauvais, and perhaps two hundred years old conceal the walls with the story of the Hunt of Maleager, as depicted on canvas by Le Brun. An old Portuguese cabinet, with intricate brass ornamentation, stands near an old French cabinet, probably a reproduction of a (Sixteenth century) Ducerceau".

Sheldon also paid note to the richness and antiquity of the materials in the Reception Room: "All the stuffs - French and Italian brocades, principally - are old; one of the cushion-covers being noticeable as a specimen of Italian Renaissance embroidery of gold-thread on a ground of crimson silk, to represent an ancient coat-of-arms. Rich hangings of olive green cloth, with velvet trimmings, depend from the top of the window-casings on the east side of the room, and between them appears a large, old French mirror, in a frame of gilt metal-work". Scattered thoughout were small reminders of Winthrop's lineage such as a Stuyvesant christening bowl encased in a wooden box made from "the old Stuyvesant pear tree" and a 175-year old Stuyvesant clock on top of one of the cabinets. There were statuettes by Clodian and paintings included an Italian Landscape by Corot; a River View by Daubigny; and, a picture of a pool and cow by Jules Dupré.

Aside from the photographs in Artistic Houses from 1883, Walter Gay (one of Edith Wharton's circle) put two further aspects of the Drawing Room on to canvas in 1911. Egerton died in London in 1916, survived by his butler of more than forty years, Jeffreys, who received $2,000 and a life annuity to him and his wife of $720, "as a mark of my high regard, of my appreciation of his faithful services, and with the belief that my comfort and well-being in my home life have been greatly promoted by his devotion to my interests". He left the house (and his summer home Quatrel) to his sons, F. Bronson Winthrop and Egerton L. Winthrop Jr., with Bronson maintaining it as his townhouse for a few more years before moving to the 25-room 39 East 72nd Street. The Winthrop's French mansion on the corner of Fifth Avenue was polished off the map by 1926.