Completed in 1854, for Earl Potter Mason (1804-1876) and his wife, Lucy Ann Larchar (1817-1873). Situated opposite Doris Duke's Rough Point, over its nearly 170-year history it has only been owned by seven families and was christened "Quatrel" in 1949 by its fifth owners, Louis Lorillard and his wife, Elaine, the founders of the Newport Jazz Festival. Its name in French ('Quatre' meaning 'four') alludes either to the four "L's" in Louis Lorillard's name, or the four members of the Lorillard family who lived here. The 17-room house of just under 10,000-square feet was designed by Thomas Alexander Tefft who died in Italy at the tender age of 33 but was already a prolific name in American architecture and among the most influential of those who succeeded in establishing Newport as a fashionable summer resort before the U.S. Civil War....
zoom_in 5 images 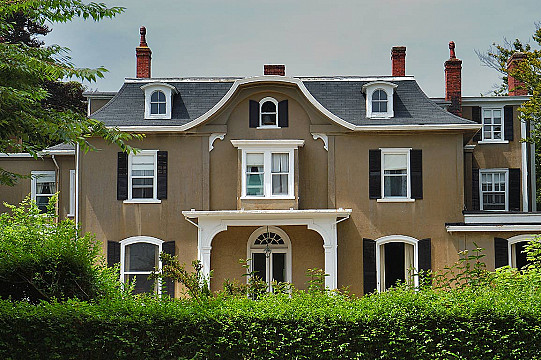 Egerton L. Winthrop, Jr., President of the Board of Education of New York

The Masons lived for the rest of the year at Providence where Earl P. made his fortune as a wholesale druggist before becoming President of the Rhode Island National Bank. Providence was also where Teftt - freshly graduated from Brown - opened his offices in 1851. Tefft very quickly became America's leading proponent of Rundbogenstil, an historic style of revival architecture popular in the German diaspora that combined elements of Byzantine, Romanesque, and Renaissance architecture with specific stylistic motifs - all noticeable in early photographs of the summer home the Masons named "Fairbourne".

"A Man of Extraordinary Taste"

After the death of Mr and Mrs Mason, their heirs sold up in 1880 to one of New York's most fashionable aristocrats, Egerton L. Winthrop, an all-round arbiter of good taste who from about the same time became one of Edith Wharton's most influential mentors.

While Winthrop admired "Fairbourne" as a house, his heightened tastes could not extend to its name and for the next half century it maintained a distinguished anonymity, only ever referred to simply as the Winthrop villa, or the Winthrop cottage. Edith Wharton gave her mentor high praise when she remarked that, "his house (23 East 33rd Street) was the first in New York in which an educated taste had replaced stuffy upholstery and rubbishy 'ornaments' with objects of real beauty in a simply designed setting". Therefore it is perhaps surprising that Winthrop waited until 1903 to give the interiors here a fashionable makeover, calling on the services of Ogden Codman Jr., Edith's collaborator at Land's End and with whom she published "The Decoration of Houses" in 1897. At the same time he used Dudley Newton to expand the house and give it a more classical air.

In Newport as elsewhere, Winthrop "devoted himself to the perfection of his dinners" and there wasn't a fashionable place in civilized society that he didn't know about. As one of the most important members of the "400" few invitations failed to find their way onto his silver tray but nonetheless in 1903 he wrote to Edith Wharton with news that Newport was quiet and he "goes nowhere". On reading his letter Edith quipped to Daisy Chanler, "have you ever noticed that, while excluded people know they are excluded, gay people (in the old sense of the word) are always under the illusion that they 'go nowhere'"!

Goelets and the Shifting Sands

Egerton Winthrop died in London in 1916, leaving his Newport home to his two sons, Egerton Jr. and Bronson. Bronson preferred to spend his summers on Long Island and sold his share in the cottage to Egerton Jr., President of the Board of Education of New York, who summered here with his wife, Emmeline Heckscher, and their only child, Muriel. By the time Egerton Jr. died in 1926, the cottage was referred to in the press as "Belle-Caro".

Egerton Jr. left the cottage to his 33-year old daughter, Muriel, who after a disastrous first marriage to Richard de Blois Boardman was then happily married to Harold A. Sands. They didn't start summering here until 1929 and for the first three years leased it to Robert Wilson Goelet who had married his third wife, Roberta Willard, in the previous year and preferred having their own space rather than sharing Ochre Court with his elderly mother; and, it was here that their first daughter, Mary, was born in July, 1927.

After the elderly Mrs Goelet generously vacated Ochre Court in 1929 by way of an appointment with her maker, Robert returned as the heir apparent leaving the owners of the Winthrop cottage to make use of their own home. Newport suited the Sands' well and they continued to summer here annually until 1936 when they purchased a farm at nearby Portsmouth which they made their year-round home. By that time, Ochre Court had become a serious financial burden to the Goelets and from about 1939 they were once again only too happy to lease the cottage rather than incur the costs of opening up their 50-room chateau, continuing to do so until 1947 when they bought Champ Soleil.

"I'm Not leaving Without Them!"

In 1937, the Sands' leased the cottage to the young family of architect Charles Kenneth Clinton whose daughter, Audrey (then just four years old) recalled an awkward moment at a lunch party. Back in those days, when a Newport house was sold it was more often than not sold with nearly all its contents. Audrey's parents invited "one of the wives" of a former owner who she incorrectly thought was a spouse of a later owner, Louis Lorillard, but being 1937 the math would imply that it was more likely to have been Mrs Muriel (Winthrop) Sands. When the salad was served, she looked down at her plate and shouted: "Those are mine! I'm not leaving without them!" Their guest left with all 12 deft plates.

In 1949, happily ensconced in Portsmouth, Muriel sold the family cottage to one of Newport's rising stars, Louis Livingston Lorillard, whose grandfather inherited Vinland from his famously single - and famously charitable - first cousin, Catharine Lorillard Wolfe. But, despite the usual connotations that went with the surname "Lorillard" much of the wealth he enjoyed came from Louis' mother's side of the family - inheriting six houses after the death of his maternal grandmother, Edith (Norman) Hunter, in 1947.

In 1943, while serving as a young Lieutenant on General Patton's staff in Naples, Italy, Louis met another New Englander, Elaine Guthrie, with whom he shared a passion for jazz. They were married in 1946 and were lent "Paradise" (now known as the Norman Bird Sanctuary) in Middletown by Louis' great-aunt, the artist Mabel Norman Cerio, but after she died in 1949 they needed a new home and fell in love with the Winthrop cottage. They christened their new home "Quatrel," that in French ('Quatre' meaning 'four') alludes either to the four "L's" in Louis Lorillard's name, or the four Lorillards who lived there.

The Price of Jazz and High Society

Louis and Elaine are immortalized in Newport as the founders of the Newport Jazz Festival. In 1954, they purchased Belcourt and staged the first festival there in the same year, giving a reception and supper back at Quatrel for the musicians after the Saturday-evening performance. The success of the event was used as the template for the story line to the movie classic High Society (1956) the script of which was penned by their family friend, Cleveland Amory, while legend has it that Grace Kelly was cast for her physical resemblance to Elaine. The movie was filmed in Newport and Quatrel featured in two scenes: the exterior was used as a backdrop to a convertible passing by; and, the interior was shot with their daughter, Edith, at the piano with Louis Armstrong.

Sadly, their real lives did not reflect the Hollywood image and two years after High Society was released Louis and Elaine separated. By 1962, they were divorced and before the year was out Louis had remarried another divorcée, Elizabeth Crane Gable, and moved to Monte Carlo. Elaine remained in Newport for the rest of her life, and it would appear she stayed on at Quatrel. She died in 2007 and in 2009 the house was sold for $1.5-million to New Yorkers Jay and Brenda Wilson who were quoted as being the sixth owners - remembering that the Goelets only ever leased Quatrel, they never owned it.

Further corroborating the evidence that Elaine never left Quatrel, by the time the Wilsons took ownership the house was in dire need of a restoration. They replaced the roof, repaired all the sash windows, and entirely redid the plumbing, heating, and electrics from scratch. Furthermore, they hired artisans to re-sculpt chipped plasterwork on the interiors that included remaking the arms and legs of various cherubs, and they matched the exact same shade of green (Eau de Nile) that Ogden Codman had used for the Dining Room in 1903. Their meticulous work saw them win the prestigious Doris Duke Historic Preservation Award in 2015 after which they placed the house and its remaining 1.24-acres of landscaped gardens on the market for $8.5-million. By 2018, it remained unsold and was reduced to $7.9-million before a sale was finally agreed in 2020 for $5,995,000.

A Newport Summer: Off Bellevue By Ruthie Sommers & Nick Mele

Private Newport: At Home and In the Garden By Bettie Bearden Pardee

The Spirits, Secrets and Sins of the City by the Sea By Larry Stanford