Built from 1868, for the Rev. John H. Hopkins Jr. (1820-1898), famous for composing the words and music to the Christmas carol, "We Three Kings of Orient Are". In 1871, he was appointed Rector of Trinity Church in Plattsburg, New York, and sold up that year to the celebrated inventor and pioneer of electricity, George Westinghouse (1846-1914), who bought the house as a present for his adored wife, Marguerite Erskine Walker (1842-1914). In keeping with the original architecture, Westinghouse enlarged the house and doubled the size of the estate to 10.2-acres....
zoom_in 5 images 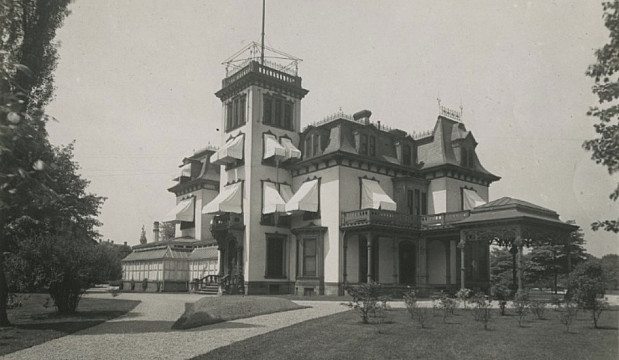 Westinghouse conducted many of his experiments here, notably from the basement of the carriage house in which he maintained his private laboratory. He dug out tunnels that were lit electrically to connect the house to various outbuildings on the estate as well as to the train station itself. He was also one of the first men in Pittsburgh to have a telephone which put him directly in touch with his offices downtown. In 1884, while conducting experiments into the safe transmission of natural gas he began digging for his own source in his own backyard which resulted in an accidental blowout that shot a plume of flame 100-feet in the air for over a week until Westinghouse devised a method to cap the well!

Mrs Westinghouse was an enthusiastic gardener and planted both flower and vegetable gardens here while also adding a large conservatory; and, she made it a habit to employ staff who had been laid off from the Westinghouse factories, retaining them to maintain the large grounds. She added several rooms to the house itself, notably the high-ceilinged Dining Room that served a retinue of important visitors over the years including the foremost scientific minds of the era, American Presidents, European Royalty, and of course their neighbors such as the industrialists Henry Clay Frick and Andrew Carnegie.

In 1888, it was reported in the local papers that Mrs Westinghouse had, "finer diamonds than any woman in Pittsburgh. Her table appointments are simply superb, the entire service being of solid silver and gold (whose cost it would be idle to attempt to guess), and the cut glass, Sèvres, Dresden and other fine porcelains are worth a small fortune.”

Westinghouse frequently dropped into Clayton to play a round or two of poker with Frick. Today, it's still possible to see the soot stains on the red silk-lined walls in Frick's Drawing Room which serve as a reminder of the pollution that plagued 19th century industrial Pittsburgh - even the wealthy neighborhoods. This perpetual cloud of soot, dust, and sulphurous fumes soon had a direct and adverse affect on Mrs Westinghouse's health. The Blaine Mansion they later spent time at in Washington D.C. was certainly a relief but she was delighted to find her "antidote" in the Berkshire Hills at Lenox, Massachusetts, where they built their pristine, white summer home, Erskine Park.

The Westinghouses - whose marriage was a renowned love match - died within just three months of one another in 1914. In 1919, their only child, George, sold the estate with - just as he did with Erskine Park - a stipulation that the house be demolished. The estate is now the public Westinghouse Park, maintained by the City of Pittsburgh.

The Electric War: Edison, Tesla, Westinghouse, and the Race to Light the World By Mike Winchell