Completed in 1893, for George Westinghouse (1846-1914) and his adored wife, Marguerite Erskine Walker (1842-1914). "Gentle George" was one of America's foremost inventors and among his many other achievements he is credited as the man responsible for America's electrics being run on alternating current (AC), having gone head-to-head with Thomas Edison who favored direct current (DC). He and his wife divided their time between Solitude in Pittsburgh, the Blaine Mansion in Washington and this, their summer home, named for Marguerite's grandmother's family....
zoom_in 20 images 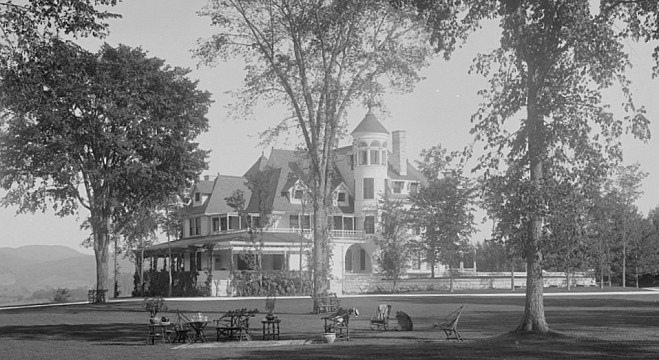 Standing on top of a hill with a spectacular, unspoilt view over Laurel Lake, Erskine Park stood on what had been a 100-acre farm belonging to Henry de Bois Schenck. Their closest neighbor was the great author Edith Wharton at The Mount. From 1887, the Westinghouses enlarged the estate to some 600-acres, landscaped 100-acres, and by 1893 the house was complete. Marble quarried from nearby Lee featured almost everywhere from the exterior of the house, its miles of driveways, bridges, and gazebos.

It was said that Mrs Westinghouse wanted Erskine Park to be as white as possible, "as an antidote to the industrial soot of 19th century Pittsburgh" (nb. Solitude and Clayton). Swans swam in the man-made lakes, silver birch trees were planted in the gardens, and apart from often wearing white, she bought white mahogany furniture for the interior and even the ceilings inside the mansion were lined with quilted white satin.
In contrast to others of similar wealth, she decorated their home with family portraits and pictures of places they had visited rather than with expensive masterpieces.

Mrs Westinghouse adored Erskine Park and oversaw much of its development. Her head gardener, Edward Norman, worked closely with her to landscape the grounds and was frequently awarded by the Lenox Horticultural Society. He later recalled, “I made 100-acres of lawn… it was the kind we liked in England – a velvet plain stretching to the horizon, unbroken, as far as possible, by paths, driveways shrubs, with perhaps only an occasional magnificent tree – an oak, an elm, or a great sycamore on it.”

Lenox today continues to benefit from having had the great pioneer of A/C electricity as a summer resident. He built a generator here which allowed him to run almost 1,500 lightbulbs in the house, outbuildings and grounds, as well as operating an electrical dairy. So as not to spoil the beauty of the area he ran all the cables underground cables, and not only to neighboring estates such as Ventfort Hall, Elm Court and The Mount, but most importantly to the town itself. Mrs Westinghouse died here in 1914 just three months after the death of her adored husband. Their only child, George, was then resident in Canada and in 1917 he sold the property to Mrs Maggie Vanderbilt - the widow of Alfred Gwynne Vanderbilt - with a stipulation attached that she demolish the mansion. In 1919, she built the Colonial-Revival "Holmwood" in its place, which still stands today.