Completed in 1882, for James G. Blaine (1830-1893), U.S. Secretary of State, and his wife Harriet Stanwood (1827-1903). This is the last of the great mansions from the 19th century that once ringed Dupont Circle. The Blaines lived here for less than a year before leasing it to Levi Z. Leiter of Chicago. It was afterwards the home of the inventor and electrical pioneer George Westinghouse before being divided into three spacious family apartments. It was institutionalized during the Second World War and in recent years has been renovated and developed by the former U.S. Ambassador to Italy....
zoom_in 9 images 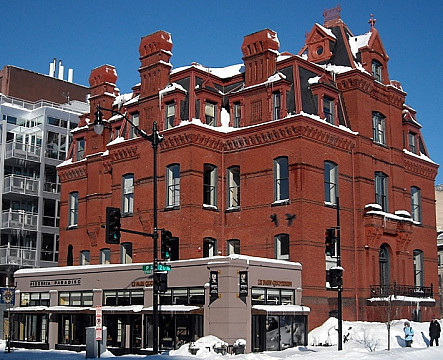 Henry B. Spencer, of Washington D.C.

James Blaine was a Maine man, but never the main man: he lost three attempts to run for the Presidency, famously losing out by a comparative whisker (60,000 votes) to Grover Cleveland in 1884. Allegations of corruption had hampered all three of his previous attempts, but this time the opposition capitalized on a rumor of him having fathered a child prior to his marriage. In Maine, he lived at the Blaine House and later summered at Stanwood in Bar Harbor. He was a charismatic orator that saw him elected as Speaker of the U.S. House of Representatives and he twice served as U.S. Secretary of State. He was a founder of the modern day Republican party and depending on which side your toast was buttered, you'd have thought of him either as "Slippery Jim" or a "Plumed Knight".

When the plans were drawn up for Blaine's new mansion by its relatively obscure architect, John Fraser (1825-1903), it was originally slated to be built on 16th Street near Scott Circle. However, in May, 1881, Mrs Blaine wrote that her husband had suddenly, "conceived a sort of disgust" for the plot on account of its proximity to the stables and within one month had paid $60,000 to his friend William Walter Phelps for a further three lots on DuPont Circle. Building costs set him back another $48,000, but work started that June and they moved in just 18-months later. The original house as a whole is comprised of roughly 25,000 square feet of living space. Its original address was 1500 20th Street and it was only given its present address at 2000 Massachusetts Avenue after 1921.

On February 6, 1883, the Blaine's eldest daughter, Alice, was married here to Colonel John Coppinger. Despite the 26-year age difference between them, the union received general approval and it was, "considered to be the most lavish wedding Washington society had ever seen at the time". President Chester Arthur - who escorted Alice to the Dining room table for the wedding breakfast - postponed a Cabinet meeting just so that he and the members of his Cabinet could attend. Yet, only months later, Blaine found his new home too large and too expensive to maintain and by the end of 1883 it was leased to Levi Leiter.

As tenants go, Levi Leiter was a fairly safe bet for paying his rent, even at $11,500/year, then the highest price ever paid for a private residence. In 1865, he opened a department store in Chicago with Marshall Field and Potter Palmer. He retired in 1881, selling his interest for $6 million when the store became known as Marshall Field & Co., and then more than doubled his fortune by investing in Chicago real estate. Mrs Leiter, like Mrs Blaine, had started life as a schoolteacher but her aspirations were decidedly loftier which prompted their move to Washington: she insisted that her daughters marry men with titles. Two complied: Mary married the British statesman and Viceroy of India, Lord (later Marquess) Curzon of Kedleston; and, Daisy became the 19th Countess of Suffolk.

From 1889, Mrs Blaine had leased the old Seward house on Lafayette Square, but after three of her children (Walker, Emmons, and Alice) and her husband all died between 1890 and 1893, by 1894 she was only too happy to leave. However, rather than return to the house she owned, she preferred to lease yet another house at 17 Dupont Circle before returning permanently to her native Augusta in Maine and the Blaine House which her husband had bought for her as a birthday present back in 1862. From 1894 to 1898, the Blaine mansion in Washington appears to have sat empty until it was leased to the inventor of the railway air brake, George Westinghouse, and his wife, Marguerite.

"Gentle George" Westinghouse's inventions were pivotal in the advancement of rail travel and he is also the man responsible for America's electrics being run on alternating current (AC), having gone head-to-head with Thomas Edison who favored direct current (DC). Having been headquartered in Pittsburgh, as his reputation grew internationally he came to Washington where he won contracts that included supplying the electrical dynamos for both the Metropolitan Railway in London and the Paris Metro. Mrs Westinghouse entertained "frequently and extravagantly" and one commentator on the history of the capital declared that her reception for the Society of Electrical Engineers that was held here in 1899 was, "the finest reception ever given in a private residence in Washington".

In 1901, the Westinghouses bought the mansion from Mrs Blaine for $150,000 and divided their time between here, Solitude, and their country residence, Erskine Park, up until 1914 when they both died, only three months apart. The house was left to their only son, George Westinghouse III, who lived with his English wife in Canada. In 1917, it became the new headquarters for the United Service Club, before he sold it two years later.

The Spencers and Apartment-Living

The following year (1920), the new owner (G.O. Mitchell of Arlington, Massachusetts) flipped the house on to Henry B. Spencer, son of Sam Spencer, the "Father of the Southern Railway System" who quit as President of the Baltimore & Ohio Railroad to work as J.P. Morgan's railroad brain. That year, Henry Spencer divided his new acquisition into three family apartments with "quarters on the top floor for their servants".

The first new tenant was Harry Fitzhugh and his four children. Harry was descended from Charles Carroll (1729-1763) who used to own all the land on which the Capitol now stands. However, Harry's arrival in Washington was clouded with sadness: his wife had tragically taken her own life just the previous year at their summer home, Northumberland Hall. Other tenants of note during this period included the recently divorced railroad heiress Emily Crane Chadbourne who lived here from 1929 until 1932; and, Francis Whitten, President of the Columbia Graphophone Company, who lived here from 1930 to 1932.

Two years into the Second World War (1941), the house was requisitioned by New York Mayor Fiorello LaGuardia as the headquarters of the Civilian Defense Office. Luxury was no longer necessary and down came the chandeliers while the parquet floors were covered with linoleum and the oak and mahogany panelled walls were painted over. By 1955, it had become the home of the United Nations Information Center. Henry Spencer still owned it, but died the following year and by 1958 the property was in the possession of his two surviving children: Samuel Spencer and Mrs Violet Thoron, who died in 2008.

By 2009, the house was acquired by John R. Phillips, partner in the firm of Phillips & Cohen LLP, one of the key figures behind the False Claims Act and President Obama's Ambassador to San Marino and Italy. Phillips spent $20 million renovating and modernizing the property: adding an underground parking deck, an adjoining six-story residential building, and remodelling an earlier commercial appendage into a restaurant.

The American Heiress By Daisy Goodwin

Empires of Light: Edison, Tesla, Westinghouse, and the Race to Electrify the World By Jill Jonnes

Princes of Ireland, Planters of Maryland: A Carroll Saga, 1500-1782 By Ronald Hoffman