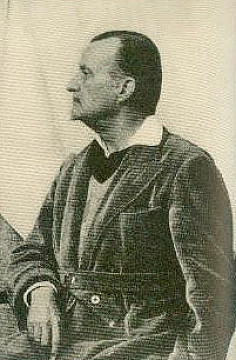 He was born at New York City and grew up between there and his parents' summer home, The Rocks, in Newport. He was educated at Groton School before entering Amherst College from which he was expelled. He studied philosophy at Columbia University but failed to graduate and then enrolled at the University of Hanover in Germany but was thrown out for holding séances. His mother brought him back to New York when she discovered that he'd shacked up with his lover in a cottage on Lake Lausanne in Switzerland. Put to work in his father's bank, he was let go after being found one time too many reading Shakespeare in a back room.

In 1900, his mother reluctantly agreed to rent him a studio in Montmartre (the favorite haunt of artists in Paris) where he devoted himself to painting portraits but more particularly, sculpting. He never actually studied under Auguste Rodin, but as an admirer of his work he did actively seek him out and befriended him. Rodin's influence on his work is certainly perceptible, but Clews was always far more interested in pursuing his own style. By 1909, his work was good enough to show in New York but it received poor reviews because his style didn't correspond to any style familiar to the critics. He is best known for his sculptures and after his death several of his pieces were bought by the Met Museum in New York and others are catalogued at the Louvre in Paris. However, to truly appreciate his character and his work, a journey must be made to Chateau de la Napoule, his home from 1918 on the French Riviera. He and his second wife, Marie, rebuilt it in their own distinct artistic style and today it is an immensely popular tourist attraction.

He was married to his first wife, Louise Morris, at Paris in 1901. But, she preferred high society to her husband's pseudo-bohemian existence and they divorced in 1910. He returned to the States in 1911 and met Mrs Elsie Goelet at a dog-show in Newport. In March, 1914, she obtained a divorce from the immensely wealthy Bobby Goelet and having kept their affair secret they took society entirely by surprise when they were married in December, in private, at Elsie's home in New York before leaving for Paris.  He rechristened her "Marie" because his sister - who he loathed - was also called Elsie.

In 1914, he, Rodin, and Albert Bernard were instrumental in creating a war relief fund for artists, architects, and models in Paris. In 1923, he published "Mumbo Jumbo," a satire on modern life, art, and politics in which he was scathing of art dealers, machine-made civilization, and snobbery. He became obsessed with the idea that he was the modern-day Don Quixote, calling Marie his "Virgin of La Mancha" and his valet "Sancho" (who he insisted in dressing up in exotic clothes). As Lanie Goodman puts it, he ended up, "a reclusive misanthropic sculptor, determined to live out his romantic fairy tale far from the steel skyscrapers" to which he owed his fortune. Nonetheless, they still mixed in the highest social circles and in February, 1937, the Clews' gave a dinner for Wallis Simpson which was, "her first real appearance at a social function since the December crisis".

Aside from the Chateau de la Napoule, he kept a studio in New York at 145 East 19th Street and a home in Paris that he christened "La Mancha" at 82 Rue d'Assas in the 6th Arrondissement. He had three children, two by his first wife and one by his second: (1) Henry III, died unmarried (2) Louise, Mrs Andrew Vanneck, then the wife of the 11th Duke of Argyll and finally Mrs Robert Clermont Livingston Timpson. She lived at Grasmere in Dutchess County, New York (3) Mancha, husband of Margaret Strawbridge.